Brett is headed to Guaymas Basin (in the Gulf of California) to sample hydrothermal vent sediments at (~2000 m deep) using the RV Atlantis and Alvin submersible.

The purpose of this expedition is to collect samples from the ocean floor to understand the diversity microbes (bacteria and archaea) and how they are living.  We have recently discovered hundreds of new branches on the tree of life from this very place. Among these are several entirely new phyla which were previously unknown! We are also studying what they consume to obtain carbon and energy, and in the Guaymas Basin there are lots of hydrocarbons (methane, butane, ethane, propane) and many of these new microbes we have found have metabolic pathways for degrading these hydrocarbons. 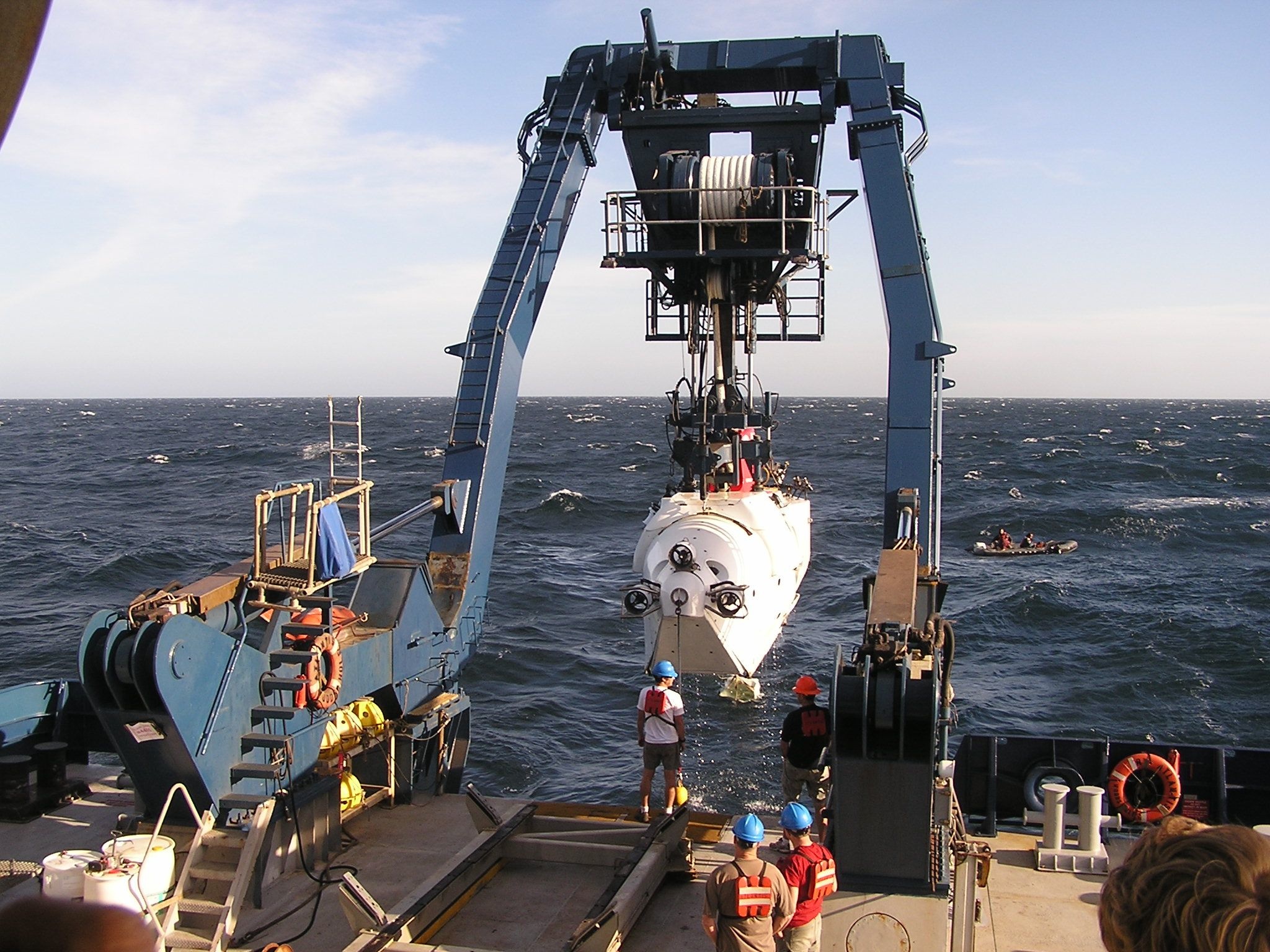 Current location of the ship

The chief scientist (Andreas Teske) blog about the cruise

Newspaper article about the trip and the Alvin in the South Jetty, Port Aransas.

My son drew his representation of me on the Atlantis. I hope the sharks are smaller.

Nov 14 – Made it to Guaymas Mexico: We ran into members of the ship robotics crew in the Phoenix airport and were able to fill every last space on their shuttle from Hermosillo to Guaymas. Which got us to our hotel on the coast early enough have dinner and see this!We are heading over to the port to board the Atlantis early tomorrow morning. 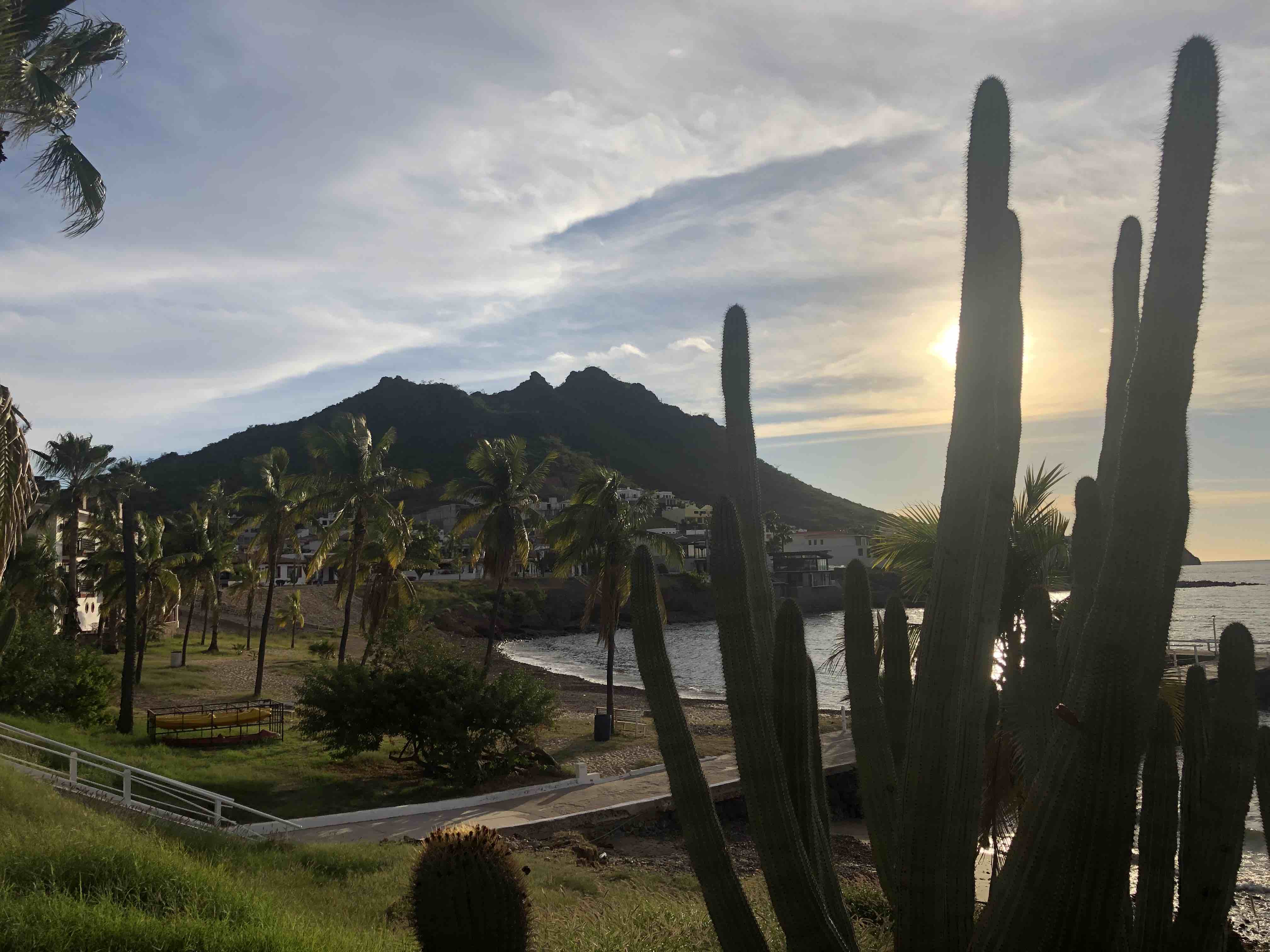 Nov 15 – The entire scientific crew boarded the ship this afternoon and we unloaded the sampling and laboratory equipment, and set up our perspectives laboratory spaces. We also had a meeting among al the scientific members. The plan is to head out tomorrow around noon and be on site in about 5 hours, so around dinner time.  There will be water sampling throughout the evening, but not Alvin dives for the ocean floor until Sat.

We had to shave all facial hair to be trained and fitted for oxygen rebreather masks, which only be necessary if there is an issue on the Alvin. 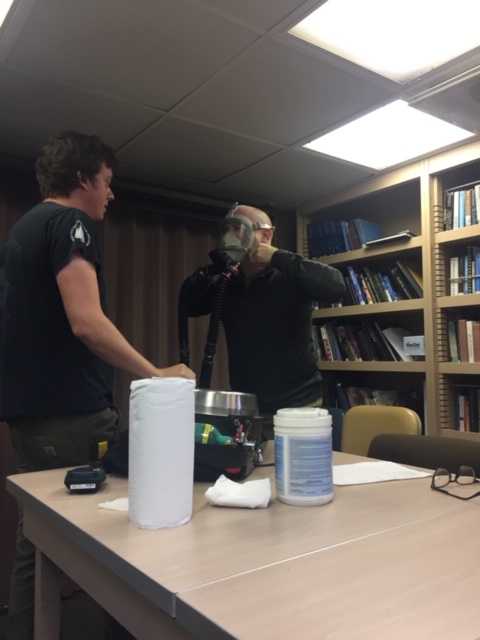 Nov 16 – Today was filled with meetings and training for the cruise. Roland Hatzenpicher (University of Montana), Viola Krukenberg, and myself made plans for how much volumes of mud we will need to do the suite of experiments, and genomic (and transcriptomic) sequencing will be doing as part of our NSF funded project together. with Andreas Teske (UNC Chapel Hill). We are sharing a laboratory with Virginia Edgcomb (Wood Hole Oceanographic Institute) who is study fungi and their role in hydrocarbon degradation. We made a tentative plan to obtain sediment core from the same locations so that we can share data that will compliment our objectives.

Looking back at the city of Guaymas as we head out to sea…. 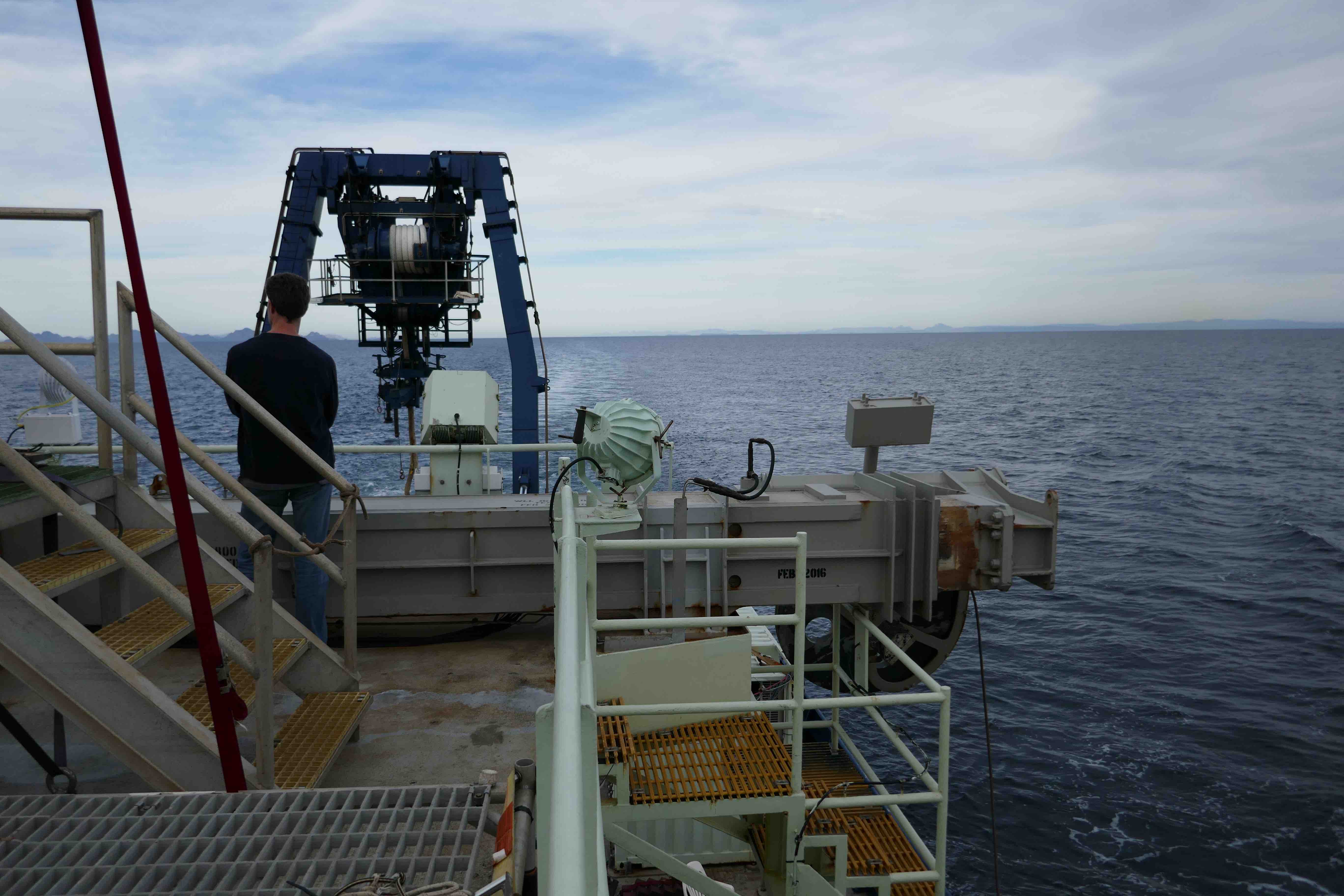 Getting close to being over the Guaymas Basin as the sun is setting. 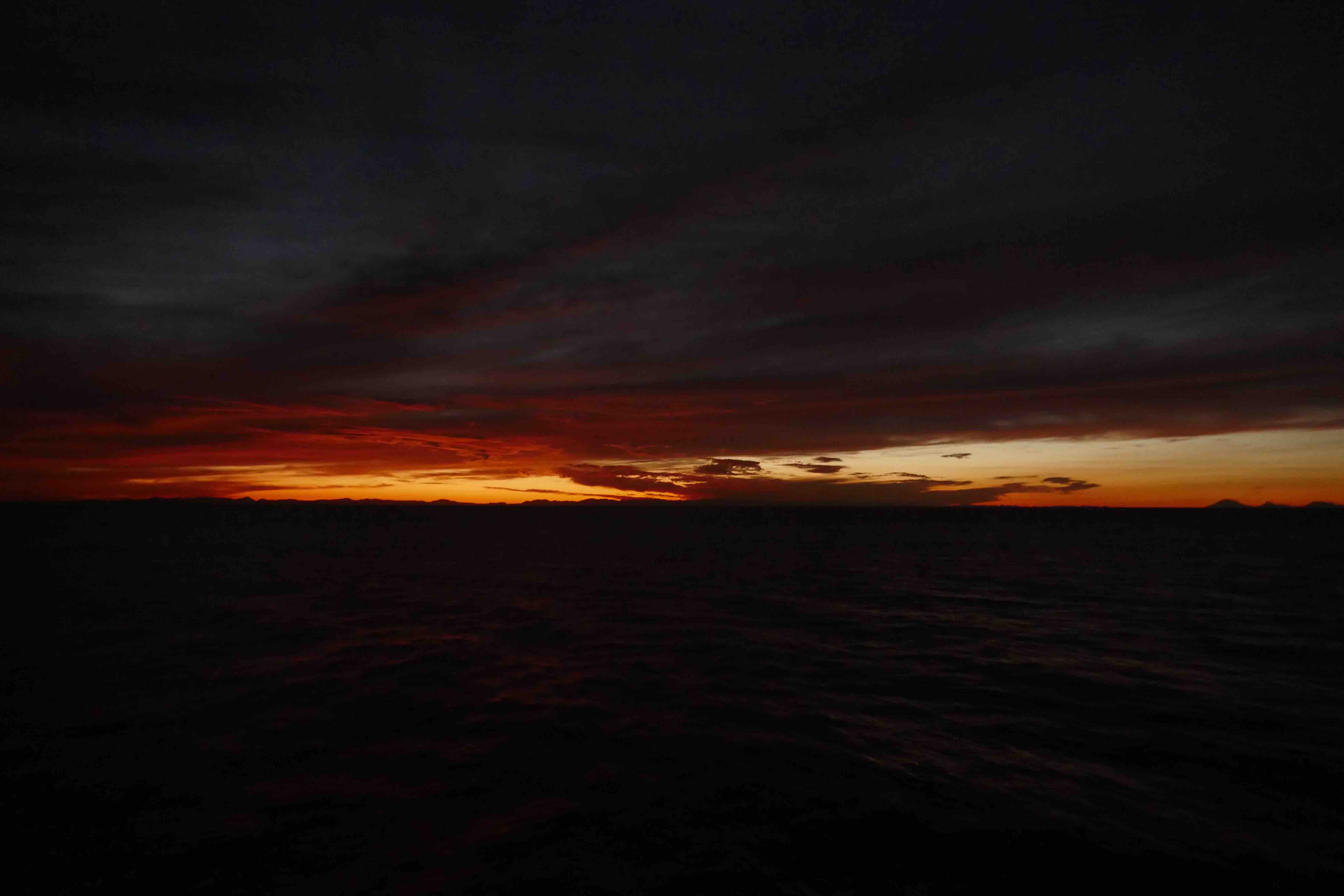 Nov 17 – Woke up to a stunning sunrise. Then after breakfast the first excitement of the cruise happen with the first deployment of the Alvin. 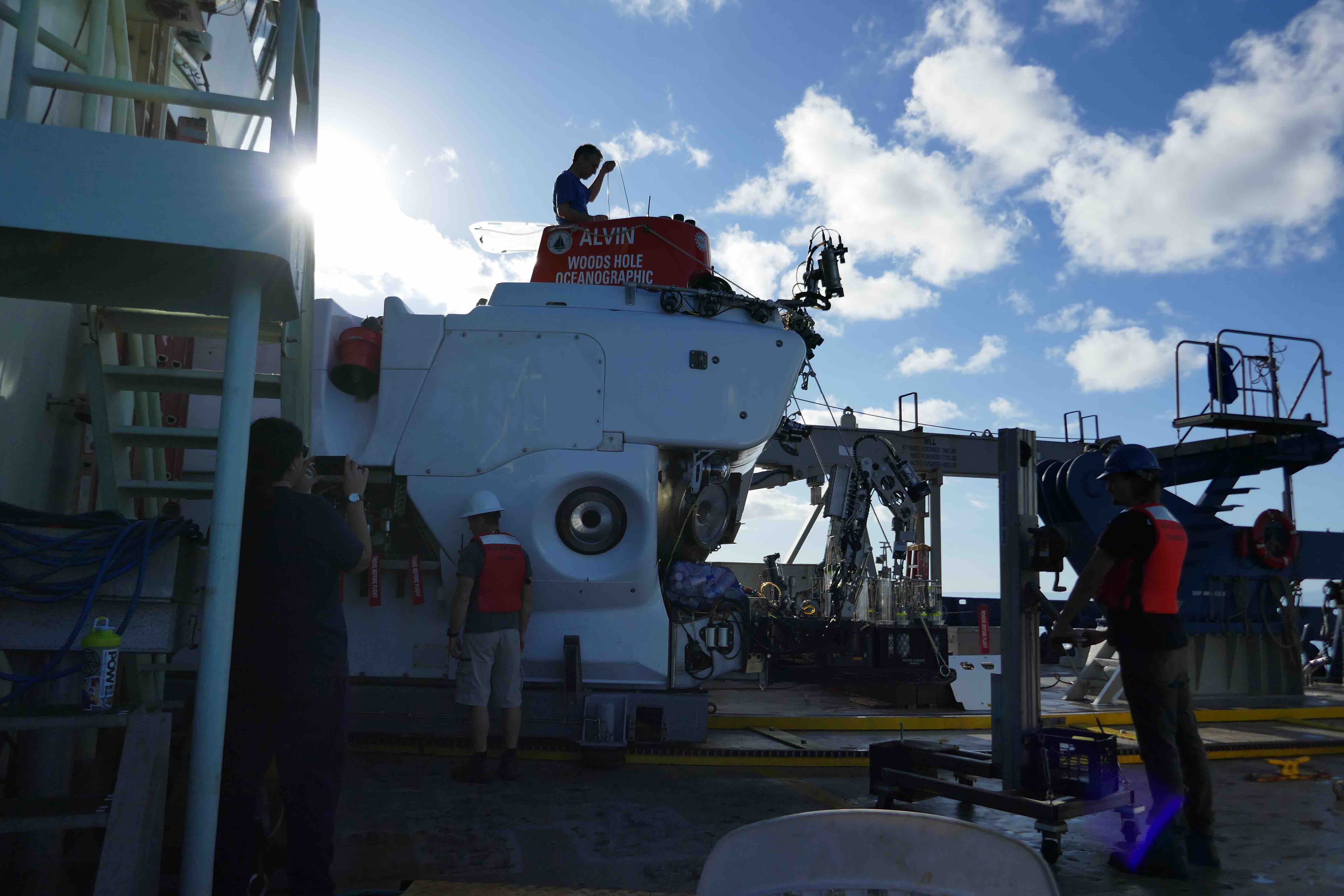 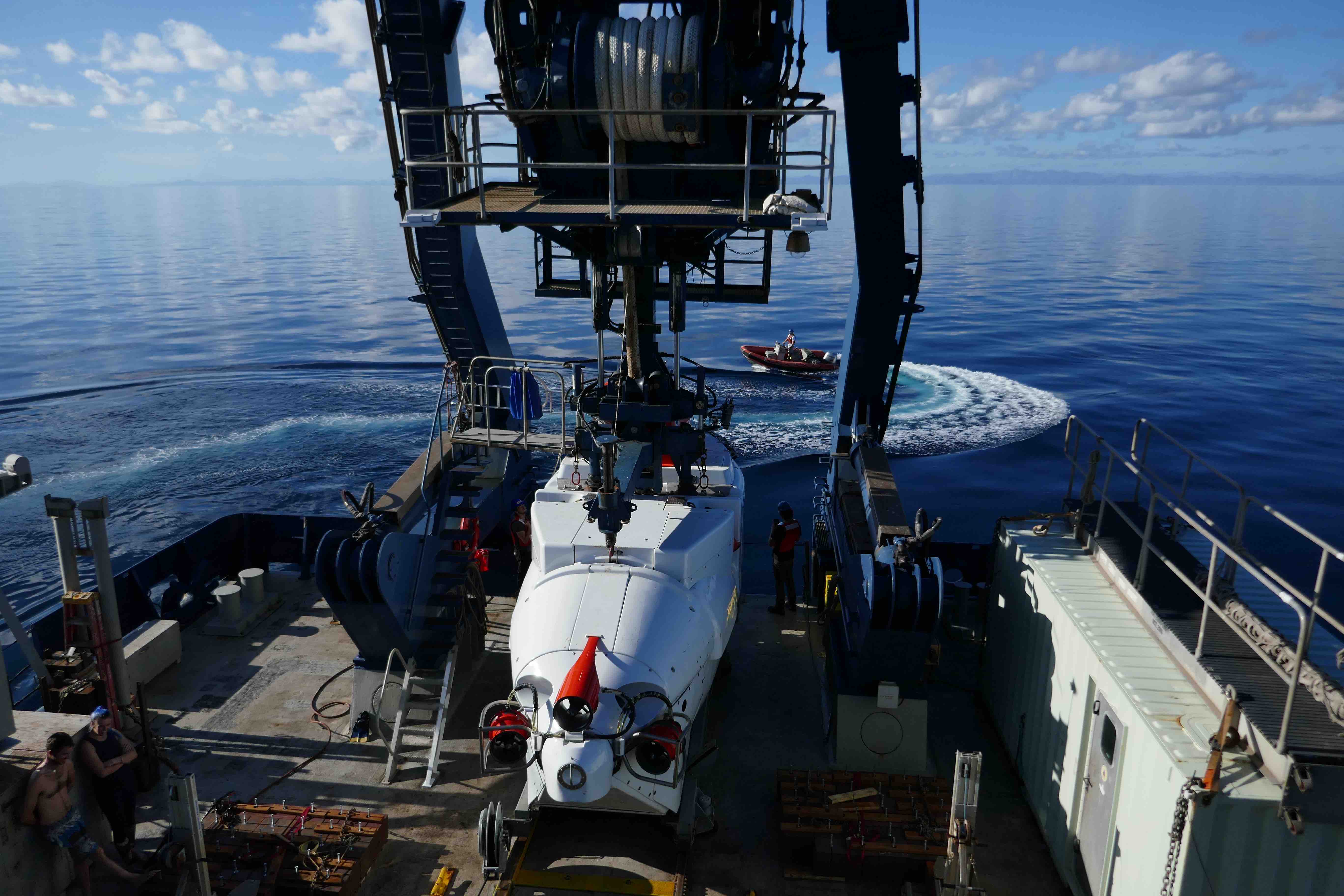 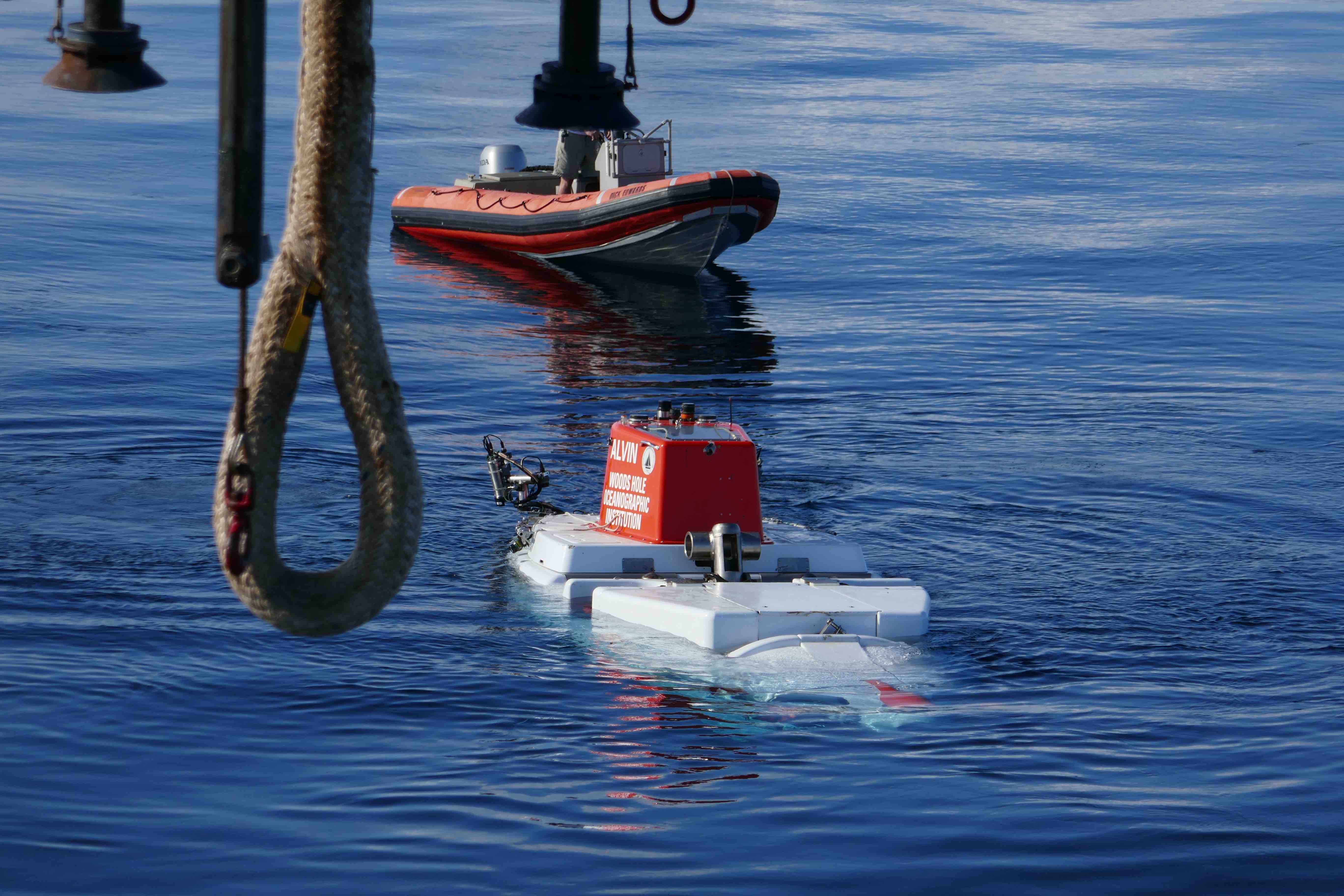 Nov 18 – Did my first dive today! We dove to 2000m (6000 ft) to a microbial mat named “aceto balsamica” where we collect over 35 sediment cores (designated site 14).  On the way down from about 300m deep to the bottom the sub stirred up bioluminescent organisms which lit up the water around us.  It looked like we were the burning head of a sparkler moving around.

While at the mat I saw all sorts of fish, glowing jellies, and 1 inch long animals darting around the sub. At one point I saw what looked like a ball rolling along the ocean floor, as it got closer it looked like a large head of a jelly that was dead, but there was on current to move it so it was actively rolling along and clearly alive.

After sampling we moved toward at a small vent just barely in view. This is where are I saw my first Riftia (tube worms) not a ton, but a few around where the fluids were venting. We can move toward a mound referred to as “Rebecca’s Roost”, but just before we made it to the location we were headed towards we hit a spot with hundreds of tube worms. This looked like just a small mound so we moved in closer and did a water temperature measurement which reach over 80 degrees C and collect a few tube worms. On my side of the sub there was a large octopus there was laying with it’s legs spread out. It then lifted one arm and moved it around as if it was waving at me. As we got around what we thought was a small mound there was a large wall that went up as far as we could see. On this wall were huge orange, white, and yellow microbial mats and tons of other animals; copepods, fish, crabs, octopus, and other stuff I have no idea what they are. We continued up the wall which was roughly 90m tall and turned out to be a spire with a venting chimney on the top!  There was also a large mushroom shaped feature at the top near the chimney. This spire was incredible and even the Alvin pilot was saying “wow” and Andreas said he had never seen anything like it. This was his 15th dive.

We collected HD videos and tons of photos of all this which I’m in the process of collecting and will add as time permits. 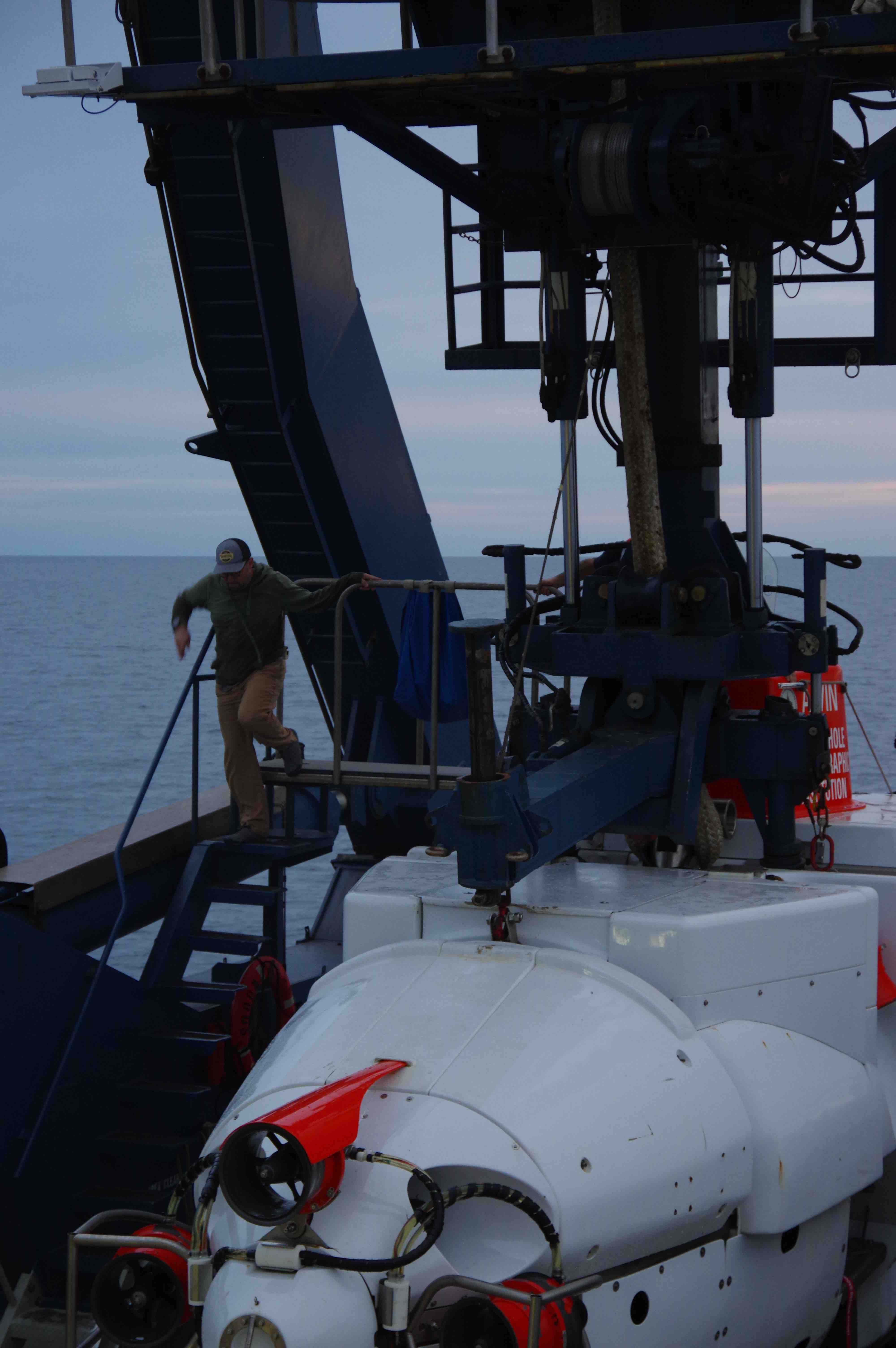 Nov 19 – Today was mostly a day to relax and catch up with emails and collect all the imaging data from various places around the ship. I was able able to do some super 4K video of Aceto Balsamico and Rebecca’s Roost. I also prepared more sample preservation tubes for new sediments that will be coming in the next week.

After this Roland and I discussed plans for the microbial response to temperature changes that we will be doing on board.  If all goes well we will be doing this experiment with samples to collect tomorrow. 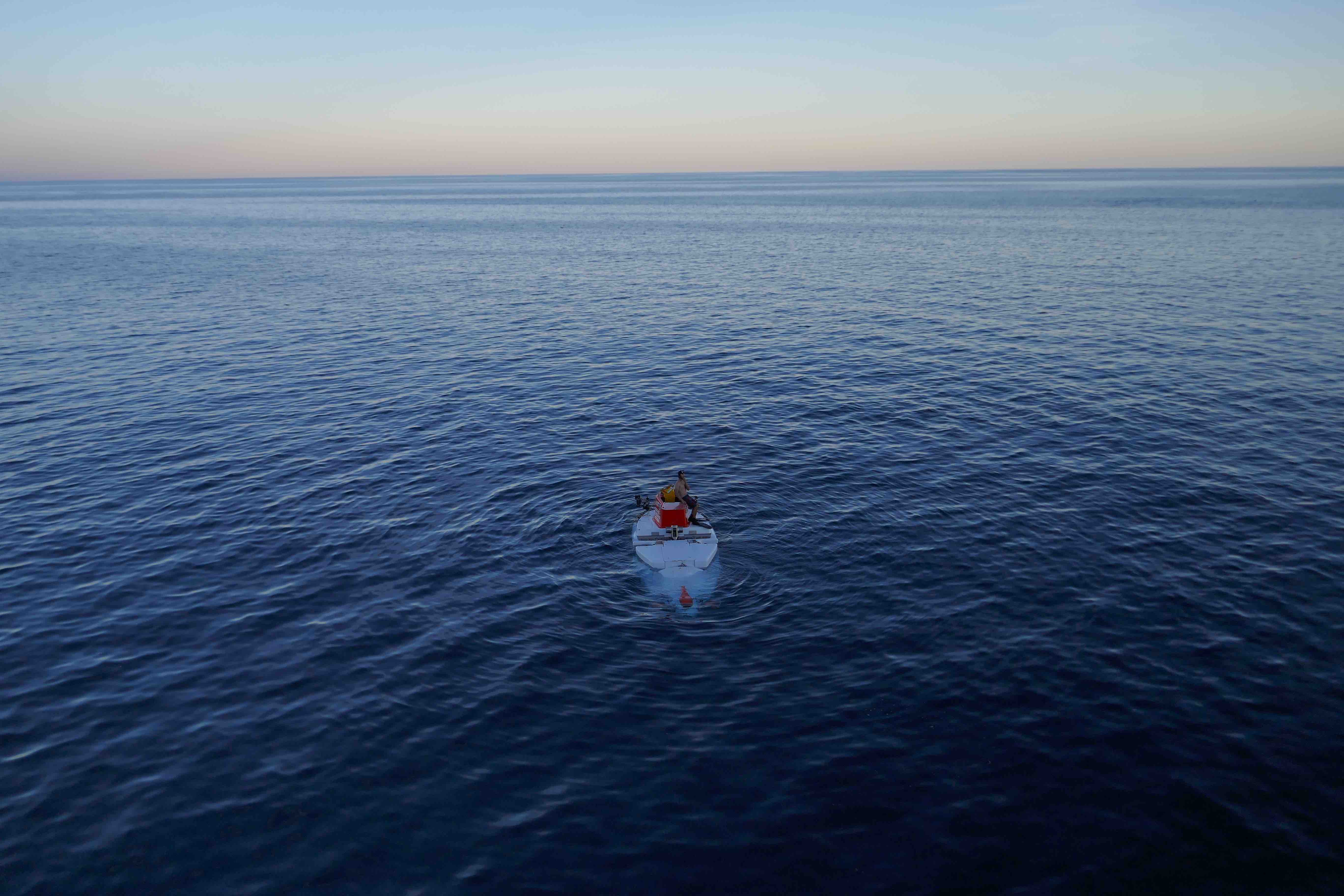 Nov 20 – Lots of excitement today. In the afternoon I was in the galley and one of the crew ran past me and told everyone there is was a large whale near the boat. That resulted in an hour of standing on the deck watching a fin whale swim around the boat.

We got some really nice sediment cores from a hot location in a area referred to as Cathedral Hill.  Up to 99 degree C at 45 cm.  As a result it is now 2:16 am the next day and we are running a microbial activity experiment, and we need to stay awake for another 2 hours to collect samples from the experiment.

Tomorrow the dive plan is to collect lots of animals, so I will likely post pictures of crab, tube worms, etc.

The rumor around the ship tonight is that the AUV (autonomous underwater vehicle) Sentry, seen here, has smelled a huge plume of methane in a new location north of us.  Which means there is a new vent that has not been seen before.  Andreas tells me the Alvin will be exploring this new vent in the coming days. I have been processing a large amount of video data from the Alvin cameras, including a really high quality 4K camera that is mounted on one of its arms. I look forward to sharing this once I have to process it and have better internet. The 4K with its zoom is able to see things we can’t see while there. 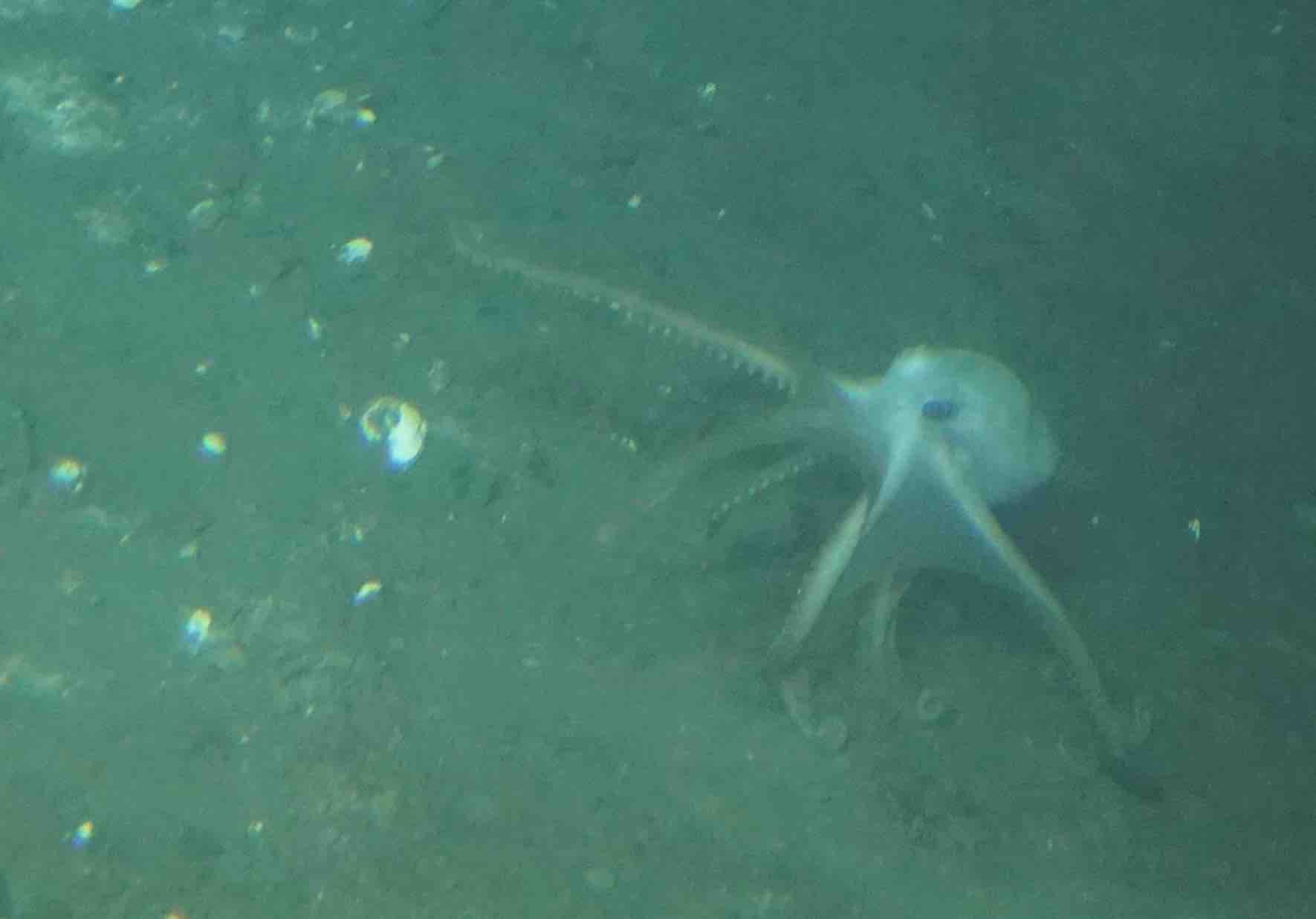 Nov 22 – Happy thanksgiving -Yesterday several people on board made hand turkeys. This American grade school tradition was new to several of the European members of the science crew, but many of the participated.

This morning the Alvin had to be aborted due to a short in the electronics so the sub had to put back on the deck and repaired. It was put back in the water roughly 2 hours after normal. This will surely reduce the number of samples that will be retrieved unfortunately.

Here is a massive cathedral hydrothermal vent chimney that was explored a couple of days ago. Nov 23 – Black Friday has a very different flavor for all the Americans on the ship this year. As my roommate said this morning, I am an early bird, after breakfast it has become routine to go to the deck and watch the Alvin deployment.  So much of a routine that most of people on the trip don’t bother to watch anymore.  Today is the first day that the boat has really been moving, and that said it is not bad at all.  The Atlantis is a very stable ship for sure, simply due to it’s large size. After the launch I spoke with Mandy Joye (Univ of Georgia) and found a unused core that is paired with geochemistry that her lab is doing. I decided to section this into several dozens of tubes that will be used for my postdoc Valerie de Anda can use to practice DNA and RNA extractions. This will be important so that once she moves to other important cores that we need to get DNA and RNA from she will be ready.

This is not the core I processed, but this is an nice example of the type of sediments we get from Guaymas. That white hair on the top is a type of sulfur oxidizing bacteria, that convert sulfide in the elemental sulfur which is white. There quite a lot of organization that goes into getting the Alvin into and out of the water. The only was to unhook and hook it up to the A-frame lift is to have 2 “swimmers” that do it by hand. Then one this is done they need to jump off and swim to a raft nearby. Once the Alvin is on deck there is a first look at what it collected. Almost all of the researchers on this cruise are interested in the sediment cores. However, it is relatively easy to collect animals as well Sediment cores are collected using the robotic arms on Alvin, by pushing plastic core liners into the mud and then pulling them out. These are then put into quivers on the front rack of the sub.