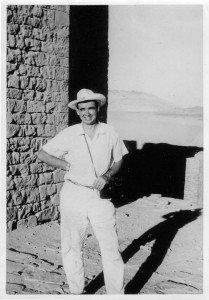 Born in Germany, August 19, 1934, Karl Butzer emigrated to England and then Canada as a child. He received two degrees at McGill University, Montreal: the B.Sc. in Mathematics (1954) and the M.Sc. in Meteorology and Geography (1955). With an Exchange Fellowship he studied in Bonn, Germany, where he received the Doctor of Science (Dr.rer.nat.) for Physical Geography and Ancient History (1957).

After two years as a research associate of the German Academy of Sciences and Literature, he was Assistant, then Associate Professor at the University of Wisconsin-Madison (1959-66). In 1966 he accepted an offer as Professor of Anthropology and Geography at the University of Chicago, where he was named the Henry Schultz Professor of Environmental Archaeology in 1980. At Chicago he was elected to various subdepartmental units, namely the Committee on African Studies, Committee on Evolutionary Biology, Committee on Archaeological Studies (Humanities), and as Professor in the Oriental Institute.

During 1981-82, Karl Butzer was Chair Professor of Human Geography at the ETH (Swiss Federal Institute of Technology), Zurich, but returned to Chicago. Since 1984 he has been the Raymond Dickson Centennial Professor of Liberal Arts in the Department of Geography and the Environment at the University of Texas, Austin. In 1995 he was Cecil and Ida Green Visiting Professor at the University of British Columbia.