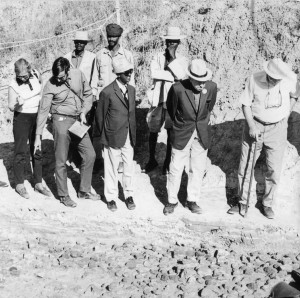 At the Melka-Kontoure Site, Ethiopia, 1971

On how the experience of emigration and ethnic prejudice can inform the educational mission, see childhood experiences in Light from the Ashes (ed. Peter Suedfeld 2001, 361-98); it cautions against ethnic scapegoating in discussing current issues (Queen’s Quarterly 99 [1992] 581-600).

“Leading specialist in both archaeology and cultural ecology, Butzer is one of the few modern geographers who research interests span both physical and cultural branches of the field. In this interview he describes some formative influences on his choice of professional vocation, his research in Africa and Near East, and his recent work on Iberian themes, both in Spain and in South-western United States. He shares reflections on the interplay of inductive and deductive approaches to geographic research and argues strongly for geography’s role as an integrative science.”