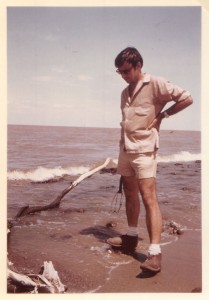 3. South Africa and Namibia, including nine field seasons between 1969 and 1983, focused on Quaternary studies and the geoarchaeology of some thirty sites, including Taung and Swartkrans.

4. Spain, including independent research in Mallorca and Catalunya (1959-72); the University of Chicago Excavations at Torralba-Ambrona (1961-63, 1967, 1980-81); and with Elisabeth Butzer, directing the Sierra de Espadán Project in historical archaeology, anthropology, and environmental history (1980-87). In 2001, Karl and Elisabeth, with Professor Juan Mateu, organized and led a series of field trips in eastern Spain for the Conference of Latin American Geographers.

5. Mexico, Butzer carried out departmental field trips 1985-91, devoted to the Spanish Colonial imprint, and he directed the Laguna Project 1995-2000, addressing the environmental history of northern Mexico. Karl and Elisabeth Butzer also organized and led urban and rural field trips in Central Mexico (1989) and Northern Mexico (2000) for the Conference of Latin Americanist Geographers.