Compact of Free Association – A Brief History and Modern Contextualization 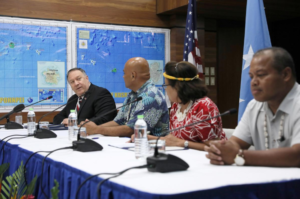 Following the end of World War II, the United Nations established the Trust Territory of the Pacific Islands (TTPI) in 1947 to administer the Pacific island territories once held by Japan during the war. Initially, the TTPI was administered by the United States Navy from Guam before transferring administration to the US Department of Interior in Saipan, Northern Mariana Islands. Administration of the TTPI was divided into seven districts that followed previous colonial divisions: the Marshalls, Ponape, Truk, Marianas, Yap, Palau, and Kosrae. Beginning in 1979, the Marshall Islands and the Federated States of Micronesia achieved independence from the TTPI and established full sovereignty after signing into a Compact of Free Association (COFA) with the United States in 1986. Both states became members of the United Nations in 1991. Palau was the last of the TTPI states to achieve full sovereignty after rejecting an offer to join the Federated States of Micronesia, establishing the COFA with the United States in 1986 and joining the United Nations in 1994.

Today, the United States continues to maintain this set of COFAs with the Federated States of Micronesia, Palau, and the Marshall Islands, having renegotiated the terms of the compacts in 2003. These compacts are often largely seen as compensation for the legacy of nuclear tests that the United States conducted on the Marshall Islands, the Bikini Atoll, and the Enewetak Atoll. These tests resulted in loss of life, long-lasting negative health effects, and a reduction in usable land and resources. The Marshallese and residents of surrounding islands were not adequately informed as to the potential risks associated with nuclear testing in the area. Children reportedly played in nuclear fallout that rained on nearby islands after weapons testing, thinking it was snow. Marshallese often faced forced relocation, radiation burns, birth defects, and cancer. The National Cancer Institute estimated that as much as 55% of all cases of cancer in the Northern Atolls of the Marshall Islands can be traced to nuclear fallout from the Castle Bravo nuclear test.

Under the compacts, the Freely Associated States (FAS) are recognized by the United States to be sovereign entities with the authority to manage and conduct their own foreign relations. In exchange for sole access to the airspace and territorial waters of the FAS, the United States provides military and financial assistance. Sovereignty of the FAS may be limited, however, if the United States feels that the foreign affairs behavior by the FAS inhibits or limits its ability to maintain the defense and security responsibilities of these states (which is stipulated in the terms of the COFAs). The majority of the citizens in these states have the right to live and work in the United States and are also eligible to serve in the US military.

The future and geostategic significance of the COFAs is beginning to morph as regional power struggles threaten to play out in the region. The current COFAs are set to expire in 2023 for the Marshall Islands and the Federated States of Micronesia in 2023, and for Palau in 2024, leading the United States to redouble its efforts to signal its security commitment to the region. In August of this year, Mike Pompeo became the first US Secretary of State to visit Micronesia. The high profile visit was aimed at helping to lay the foundation for future negotiations and to send signals to the FAS in the wake of increasing Chinese influence in the region. Maintaining perceptions of the United States’ strategic interest and willingness to provide military and financial assistance in the region is one of the most powerful strategies for countering China’s four objectives in the South Pacific: 1)  Extending the Chinese security perimeter beyond the so-called Second Island Chain, 2) getting the remaining states who recognize and maintain diplomatic relations with Taiwan to switch and recognize the People’s Republic of China (of the 17 remaining, 6 are Pacific Island States and of those 6, 2 are Palau and the Marshall Islands), 3) gaining access to the resources in the region (mainly fish and timber), and 4) expanding the Belt and Road Initiative into the region to exert economic influence and to potentially create port facilities that could handle the capacity of Chinese naval vessels.

Micronesia is the only FAS state that maintains diplomatic relations with China. Beginning with diplomatic relations in 1989, China has continued to expand its economic, political, and social influence on Micronesia. They have been responsible for developing key infrastructure in Micronesia such as the Pohnpei State Administrative Building (the largest building in Micronesia) and for the donation of the $10 million state house in Chuuk.  The relationship between China and Micronesia is summed up in an article by Grant Newsham, a retired US Marine Corps officer and a former US State Department diplomat:

“China has taken a steady, systematic approach to political warfare during the last 30 years in the [Federated States of Micronesia (FSM)]. Its agencies have insinuated themselves into its political and commercial worlds through grants, loans, donations, gifts, scholarships, educational opportunities and China-sponsored regional forums offering investment and aid.

A particularly effective approach has been “visit diplomacy” – hosting FSM leadership and delegation visits to China and rolling out a sometimes-literal red carpet. The then-FSM president Peter Christian visited China in 2017 and met with President Xi Jinping. Besides meeting senior Chinese officials, visitors on these all-expenses-paid trips are well-treated. Reportedly they receive cash payments for “expenses” that are sometimes a source of controversy back in the FSM.”

In recent years Palau, a country of 20,000, has also felt the weight a rush of Chinese influence. After being placed on China’s list of approved travel destinations, Palau was flooded with Chinese investments, resulting in a gentrification of sorts that forced locals to have to relocate after land was quickly purchased, hotel construction boomed, and rents skyrocketed. In 2017, China removed Palau from its list of approved packaged tours, causing the number of tourists to plummet. This ban is likely intended to put pressure on Palau to reconsider its recognition of Taiwan. In the local context, people in Palau were pretty split between those who benefited from Chinese business (land leases, construction, etc.) and those who were displaced or who lost out on Chinese tourist dollars. In other words, China found a way to hit Palau where it hurts.

The United States undoubtedly needs to unambiguously reinforce its commitment to the COFAs moving forward. With rumors of China’s discussions with Vanuatu to build a permanent military base in the South Pacific, and an expectation that China will continue to press for more geostrategic influence in the region, it will be in the interest of the United States to prioritize maintaining its historical relationships with the FAS. The US already sent mixed signals to the region when Congress failed to pass the economic assistance package of its renewed COFA with Palau in 2010. It took six years before the issue was finally worked out. As Newsham notes, “If the United States is seen to be less active in the Western Pacific, the governments of these territories may feel that Chinese dominance in the region is inevitable and negotiate favorable terms with Beijing.” As the struggle strategic dominance in the region has now become intertwined with local politics and economic influence, the United States cannot take for grated its historical presence in the region.