While there may be demographic, development, and economic factors that present disaster risks to Oceania states, the primary sources of disaster risk, particularly those resulting from climate change, stem from the geological foundations that make up tiny land masses these states call home. Island formations in Oceania can broadly be characterized into three types: high islands, low islands, and continental islands. Yet contrary to how they sound, these terms do not correlate to the height or elevation of an island but are instead used to express differences in island geology. This post will baseline general island geological types and provide a few brief examples of disaster considerations.

Volcanic in nature, high islands originate from underwater eruptions where the magma has cooled and built up over time. The volcanic activity creates a steep peak with ridges radiating outward from the peak. High islands are the result of relatively recent volcanic activity causing basalt outcrops to rise above the ocean surface. As a part of the “Ring of Fire”, a string of volcanoes bounding the Pacific Ocean, Melanesian island states are largely composed of these island types.

Depending on where a volcanic island is in development, the danger of volcanic eruptions is a very real threat. Many island nations have at least one active submarine volcano, but also may have populations located on volcanoes considered geologically active.  The island of Niuafoʻou in the Kingdom of Tonga is considered volcanically active and has a population of 650 people. An eruption of any sort may displace this population and require substantial island nation resources.

Despite being mountainous and having substantial elevation, high island types may be more prone to flash flooding disasters. The problem is two fold. First, populations tend to concentrate the low lying coastal areas because that is where the majority of economic activity is. Additionally, high islands mountainous topography causes water to flow along streams and rivers. During periods of extreme rainfall, these catchments are overwhelmed, resulting powerful water flows that destroy infrastructure and cause death. The island of Tahiti in French Polynesia dealt with these issues as recently as 2017 and climate change may only increase frequency of such events.

Sometimes described as coral islands, low islands are often the result of high island weathering across geological time. As volcanic islands begin to weather away and flatten out, coral skeletons and sedimentation are deposited on top. These deposits may present themselves as atolls with low lying sedimentary formations and shallow lagoon in the core. They may similarly weather down to sedimentary island types such as Nauru.

While high islands may express mountain ranges or a wide breath of topographical features, low islands rarely rise more than 7 to 8 meters above sea level at their zenith. Because these islands have little topographical diversity, rising sea levels put low lying islands at risk of being ‘passively’ wiped out in the next 100 years. As outlined in Table 1 only about 30% of low islands are 2 meters above mean sea level and less than 10% above 3 meters. If the worst case projections by NOAA are true, sea levels could rise 2 meters by 2100, leaving only 10% of islands above water and likely rendering them uninhabitable.

Furthermore, low islands do not typically have large fresh water reserves or pools to support them, relying instead on regular rain capture as regular water supply. Those islands that are lucky enough to have fresh water reserves may find them endanger of seawater contamination from rising sea levels or storm surges. A study sponsored by the USGS found that increased wave activity and wave run up would result in overwash that could contaminate the subsurface freshwater lens. 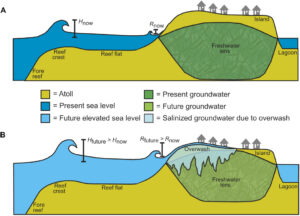 Island geography can vary depending on formation, age, and how much weathering the island has experienced over time. The islands across the Hawaiian Archipelago conveniently express the relationship between time and island type. The Big Island of Hawaii represents the latest installment of an island building event that extends 2,4000 km to the Kure Atoll.  Every island in between represents the various types of islands over the course geological time. Kauai for example, formed 5 million years ago, is the oldest of the main islands. It is believed to have lost over 3,5000 ft in elevation and 1,000 square miles since its peak formation. Eventually, Kauai may become an atoll or some other iteration of low island as its volcanic core weathers beneath the oceans surface. 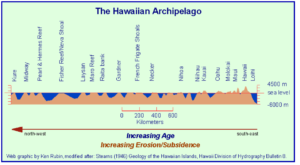 Figure 3. Cross Section of the Hawaiian Archipelago depicting the relationship of time and island weathering.

While not generally the primary focus of disaster studies, continental islands deserve an honorable mention as regional impacts to continental islands such as New Zealand and Australia may limit international cooperation efforts. Continental islands are simply un-submerged pieces of the continental shelf may be attached to continents before sea level changes or  have separated from the mainland as a result of tectonic activity. This is the case with New Guinea, which is separate from Australia only by the Torres Straight. Some change in the sea bottom could ultimately bring the two back together. Although these islands may share similar features to the previous two types, they are formed through distinctly different geological processes. It is important when discussing Oceania at large to consider the impacts of climate change on these islands. For one, increased likelihood of drought or significant damage to coastal infrastructure could limit their ability to support Oceania at large. More importantly, the impact of climate change to these islands should be considered because these islands will likely become the refuges for those who have been displaced by it.