TERA in Oceania: What Does Twenty-first Century Resiliency Look Like?

Oceania needs climate action now. The question is: What kind of action? The impetus for action in Oceania is increasingly focused on adaptation strategies and building resiliency since mitigation efforts have long gestation periods.

Adaptation is the easier of the two to conceptualize — and recognize. Atoll nations are adapting to climate change by increasing elevation, building sea walls, and purchasing land on neighboring lands. Resiliency though, is a more abstract concept. Are islanders supposed to be tougher in the face of a category five cyclone? Rebuild faster with a little extra elbow grease? No.

The best way to understand resiliency is to think about how effectively and efficiently a small island developing state (SIDS) faced with the consequences of climate change can act after a severe climate event, whereas adaptation is an attempt to act beforehand.

A New Tool on the Horizon

The Trilogy Emergency Relief Application (TERA) is one tool that has the potential to significantly increase resiliency in Oceania, and all it requires is access to a cell-phone, cell-charging, and a functioning cell-phone network. It can help pinpoint where distressed people are located, determine what immediate needs are, and communicate vital messages before, during, and after emergencies. And, it can be done with basic access to Short Message Services (SMS) — yes, the same basic technology behind your daily text volleys.

TERA was created in the aftermath of the magnitude 7.0 earthquake that hit Haiti in 2010, when over 900,000 displaced people relied on SMS as their only means of communicating their dire situation. The international Red Cross and Trilogy International Partners, a cellular service provider, teamed up to build a relief application and system that harnessed SMS’ ability to get information to and from officials and aid agencies.

Kenya deployed TERA in 2015 before the seasonal rains and flooding season. There, TERA reached over 70% of intended recipients. Of those, more than 90% found the information helpful, 83% took action, and 73% shared the information with others. Numbers showing this level of success are uncommon in an aid and development space that is often criticized as both inefficient and ineffective. Since 2014, TERA has expanded to over 40 countries. However, limited information on exactly which countries puts into question TERA’s current status in Oceania.

There are three main reasons why TERA can be deployed and increase resiliency in Oceania. First, TERA is available. Television, radio, and other traditional means of transmitting messaging are often disrupted for long periods of time in the aftermath of an emergency. Cell-phone calling is generally not useful given that mass use after an emergency overwhelms the capabilities of mobile networks. SMS though, avoids that problem. The ‘Simple’ in SMS is not just referring to the usually-short nature of your messages; it is also indicative of the space an SMS takes up in a network grid.

Accessibility is the second strength of TERA. Cell-phones are everywhere, Oceania included. Although current data on cell-phone penetration in Oceania is limited, the Association of Global Systems of Mass Communication estimates that 74% of Oceania will have cell-phone subscriptions by 2025, although this number includes Australia and Oceania. Energy poverty needs to be considered though, especially on isolated, rural atolls. 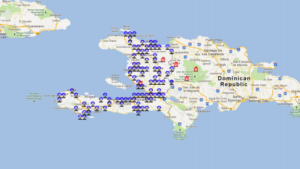 TERA’s two-way communication capabilities are the third main strength. System administrators can use the application’s platform to reach out to a certain subset of registered uses, making the technology highly specific to certain geographic areas and affected communities. Those on the ground and in need of assistance can also send messages to the system to detail their immediate needs or location. A system administrator can then access need data and view maps showing locations and quantities of those in need.

It is fair to say that TERA’s two-way communications are capable of revolutionizing resiliency efforts. Its availability, accessibility, and characteristics have made TERA a valuable asset in transmitting early warning, assessing needs, tracking vulnerable populations, and coordinating rapid response. However, TERA does not come without its downsides.

The potential costs of TERA’s infrastructure for SIDS and aid agencies are high. SIDS are not equipped with data storage facilities nor a high-skilled workforce that features statisticians and computer scientists. For aid agencies, technological tools like TERA represent a fundamental shift in the nature of delivering aid. Although the ends do not change, the means are revolutionized, which means delivery processes, worker skillsets, and supporting donors are forced to adapt — processes often done slowly.

Additionally, access will need to expand to the nearly 25% of islanders without access to cell-phones. Those without are probably some of the most vulnerable, isolated islanders. Reaching those islanders will require delivering reliable electricity and cell-phone infrastructure to far-off regions of Oceania that are not profitable for private cell-providers. Accordingly, public, aid, and development funds will be responsible for building out those capabilities.

Today, the need for climate action and the geostrategic importance of the region are attracting more actors to Oceania than ever before. Donor institutions and partner states can look at TERA as an example of what innovative and effective solutions to increasing resiliency look like. Going forward, supporting actors should reorient their aid towards similar adaptation and resiliency building efforts that harness technology, develop sophisticated workforce capabilities, and provide modern telecommunications infrastructure to Oceania.