Climate Change and the Food System

Climate change is predicted to have dire implications on national and regional food systems. In many countries, climate change has had a large impact on food security by altering landscapes, inducing new crop diseases, enhancing the intensity of existing diseases, and creating longer periods of droughts and flooding. These occurrences decrease yields and jeopardize the livelihoods of the 80% of smallholder farmers around the world.

In Oceania, specifically on the island nations whose food systems are most vulnerable, hazards like sea-level rise, salt-water intrusion, violent tropical storms, and droughts are predicted to cause major damage to the food system.

An Opportunity to Restore an Already Broken System

However, the hype around food and climate often overlooks an already broken system. Long before climate change awareness came into the picture, major shifts occurred within Oceania’s food system that led to unsustainable local economies, land degradation, and increased vulnerability to crop and pest diseases. These shifts caused major negative environmental and health outcomes prior to increasing climate instability. Hence, climate change awareness may just be illuminating a long-needed shift within the agricultural sector in Oceania. This unique opportunity should be leveraged by international actors, governments, and communities, alike, should use this entry point to drive momentum to solve their long-standing food problem.

In my previous blog titled “Climate Resilient Strategies: Innovative or Restored Systems”, I talk about the green revolution and its consequences for the food system. Traditionally, these island nations grew hearty root crops like cassava, sweet potato, taro. They grew fruits like banana, citrus, breadfruit, pineapple, mango and coconut. These crop systems were shifted during the green revolution when they were replaced by market driven crops for export. Exports crops now include oil palm, coconut, sugar, cocoa, and coffee.

These export crops are land and resource intense, grown on a monocropped designed plantation, and owned by corporations who contract business out to smaller landowners. However, this land could gain higher yields and increase smallholder farmers resiliency if put into more traditional fruits and vegetables.

For example, palm oil production has been under heat for several years because of their unsustainable practices. Together, oil palm and rice plantations are responsible for the deforestation of 38% of the world’s mangroves. Mangrove forests serve as a buffer against sea-level rise, flooding, and intense storms by acting as a physical barrier to reduce erosion and store water.  Papua New Guinea is the third largest producer of sustainable palm oil in the world. Not only have these palm plantations destroyed natural resilient landscapes, they are also more susceptible to climate hazards than traditional crops. These palm plantations are vulnerable to extreme wind damages which area predicted to increase in the region.

Another example of an already unsustainable food system within Oceania is their sugarcane production industry. Fiji transitioned from small-scale sugar cane production to large-scale production in the 70’s. Cane production is rain-fed and has been in a slow decline because of extreme weather conditions, like cyclones and drought. Yet today, 22,000 growers produce sugar cane on 100,000 hectares of arable land. This leaves families and entire communities reliant on one crop for their livelihood.

Back to the roots: Integrating traditional, resilient crops to restore the food system

Taro, a durable root crop, is grown on a small scale for people’s home consumption, but is in slow decline. Although a current market doesn’t exist outside of the community, taro requires less water, is more resilient to salt-water intrusion, and isn’t susceptible to wind damage because it’s grows underneath the soil. Further, taro upholds traditional culture, being present in many Pacific Island ceremonies and other social events. There are many options that exist like this, like cassava and sweet potato that can be turned into other agri-products like flour and snacks. 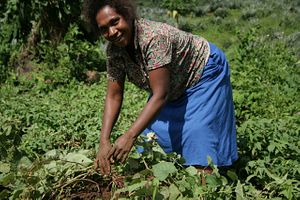 A Pacific Islander cultivating sweet potatoes in her field

Many of the Pacific Island countries depend heavily on low nutrition quality foods, leading to some of the poorest health outcomes in the world. According to the World Health Organization, in at least 10 Pacific Island countries, more than 50% of the population is overweight, some reports estimating up to 90%. Further, micronutrient deficiencies are common, including anemia, iodine deficiency, and vitamin A deficiency.

Imported foods are obviously a growing concern for many island nations, but I’d argue that these shifts were driven by the green revolution, not people’s preferences or urbanization. If this is the case, then traditional foods can easily be reintegrated into diets with careful policymaking.

There are many promising initiatives to change behaviors around food consumption at the government level. “We are also challenging our own agriculture and fishing sectors to strike a balance between local supply and commercialization,” says Dr. Temo Waqanivalu, technical officer for the WHO in Suva, Fiji.

An Opportunity to make holistic change to the food system

As climate resilient initiatives and strategies are being drawn up, an exciting opportunity arises. A restored food system could be designed that is resilient to climate hazards, safeguards local economies through diversity, and encourages healthy eating habits. It’s encouraging to see that this approach is already being put into practice.  Organizations like Caritas, are supporting a number of restorative practices, like mangrove restoration on shorelines. Networks like the Pacific Food Summit now exist to address food security challenges and promote traditional, more resilient food production and consumption. 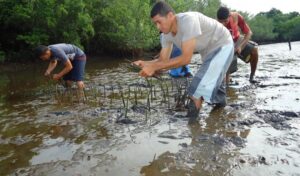 It’s important that we recognize that historically, Oceania faced pressures under globalization to forgo their sustainable practices for trendier practices, which have greatly affected their food sovereignty status. Climate change only compounds this issue. However, with climate adaptation and mitigation funding streaming in to support these island countries, it is important that we take this opportunity to design a restored food system that increases crop availability, relies on traditional crops and knowledge reducing the vulnerability of the current system and feed the 11 million inhabitants of these islands.

Lauren is a program design specialist committed to promoting food security by co-creating innovations alongside vulnerable communities. She is a technical advisor to two program portfolios in West and East Africa. Her focus is to build up communities to be the drivers of their own change using a participatory and adaptive approach, recognizing that the barriers to food security are complex. By empowering farmers to dissect information about climate, environment, culture, market access and supply, community and household dynamics, Lauren aims to support resilient, self-reliant communities. Lauren actively works towards cultivating teams that develop effective monitoring, evaluation, and learning tools to strategically inform programming to better serve their partner communities. She's a Masters Candidate in Global Policy Studies at the Lyndon B. Johnson School of Public Policy, specializing in evaluative methods and non-profit management. Lauren holds a BSc in Natual Resources and Environmental Science.