↓ Skip to Main Content
Home › Agriculture/Water › Developing Resilient Systems: How can we make sure the right decision makers are gathering at the table?

Developing Resilient Systems: How can we make sure the right decision makers are gathering at the table?

The planning and implementation of effective climate change resilient strategies is dependent and reflective of who is invited to the table during key decisions making events. I argue that local voices need to be at the core of every meeting, workshop, forum, and planning event, and that currently, we should be doing better. External stakeholders such as international organizations, donors, and foreign government assistance programs have been providing technical and financial support to make strides that will build the resilience of Oceania against climate change and are the current stakeholders at the table. However, these initiatives require a not only a high level of technical expertise, but also a deep knowledge of the Oceania’s social, economic, and governance systems from at the community level and they need to be included in the conversation.

Oceania is comprised of over 10,000 islands, representing 20 countries, territories, and/or dependencies. These countries are home to 10 million people who inhabit 300 islands, have countless dialects of language and distinct cultures. As an example, Papua New Guinea alone is home to over 780 distinct dialects.  According to the policy Brief by the Toda Institute, aside from Papua New Guinea, no the other nation state has more than 1 million people residing amongst their islands, demonstrating the complexity of people and culture. Each of those cultures comes with its own set of history, norms, rules, and systems that governs it.

Many of these countries operate on a dual-governance system or a multi-governance system in which governments formally rule, but informally, traditional authorities, or chiefs, elders, tribal leaders or religious authorities, still govern rural areas.  Colonialism shifted power from local authorities to mirror Western nations governments, and left without creating space for local authorities within these new governments.  In the unique case of Papua New Guinea, indigenous groups are explicitly recognized as viable units of society within their constitution, giving them formal rights and a voice within their system. Unfortunately, this is a unique case amongst the small islands nations, where traditional authority is largely left out of recognized government, leaving traditional leaders no platform for their voices to be heard.

Despite the lack of formal recognition, many of these leaders have continued to govern at the community level, making important decisions about natural resources, land, and solving communal disputes. These leaders understand the unwritten laws that have ruled these communities for centuries, but yet don’t have a seat at the table when it comes to todays decisions. For example, if you scroll through the leaders of the Pacific Island Forum, the leaders working to foster relationships with regional governments and international agencies, are all from the formal government sector. These leaders are making decisions about economics, trade, and most importantly, climate change policy and programs without having local representatives present. 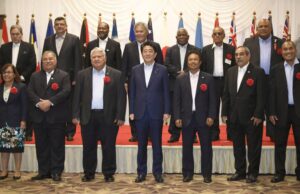 The Power of Local Voices

Being inclusive of these diverse voices is often recognized as an important step, but hardly carried out because it is challenging to do in practice. Giving space for multiple voices to be heard, disparate opinions, can be time consuming and challenging when the goal is have a concrete action point within a given time period. However, one initiative shows that local, grassroots mobilization and coordination can effectively catalyze regional change. The Climate Challenger Voyager was a community-driven project launched in 2012 with it’s mission to sale from Melanesia to Micronesia over the course of two months to raise awareness about climate change and inspire grassroots conservation and resilient action. This grassroots initiative was carried out by ten native Papua New Guineans but gained traction and support from Australian Aid, The Nature Conservancy, Manus Provincial Government, and the Wildlife Conservation Society.

Several grassroots projects exist like this, demonstrating the tenacity of these indigenous people. One poet who joined the awareness campaign wrote

“….tell them about the water, how we have seen it rising, flooding across our cemeteries gushing over our sea walls and crashing against our homes. Tell them what it’s like to see the entire ocean level with the land. But most importantly, tell them we don’t want to leave. We’ve never wanted to leave and that we are nothing without our islands.” -Kathy Jenil-Kijiner, Marshall Islands.

Voices such as Kathy’s have been heard at the United Nations Climate Summit, in National Geographic, COP23, NBC News and more.

In addition, better funded initiatives are also recognizing the importance of ensuring that indigenous voices are heard. In Ocean Cities Regional Policy Guide for Delivering Resilient Solutions in Pacific Island Settlements, they put an emphasis on integrating local knowledge, culture, and authorities into the decision making process, using the term ‘nature-based solutions’ coined by the IUCN. Nature-based solutions are ‘actions to protect, sustainably manage and restore natural or modified ecosystems, that address societal challenges effectively and adaptively, simultaneously providing human well-being and biodiversity systems.” Although a mouthful, this distills down to theme that my blogpost series focuses on; resilient solutions must come from the bottom-up in order to adequately address unique barriers within the complex social, governance, and local economic systems.

Further, the highly recognized Intergovernmental Panel on Climate Change, the IPCC, also recognizes the need for inclusion. They state there is a need to acknowledge the “heterogeneity and complexity of small island states and territories” within their recommendations. 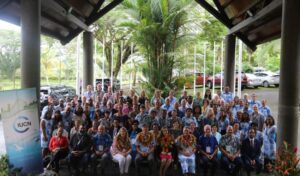 As it’s been pointed out to our class, Oceania has gained international attention in the wake of climate change. However, no matter how much funding is thrown at Oceania, no matter how many technical experts are sent abroad to provide recommendations and develop strategies, and no matter how many high-level government agencies attempt to solve this imminent challenge, all voices need to be present to make viable and sustainable impacts towards our climate goals.

I urge stakeholders to consider the importance of community voices and involvement in their processes. Their roles should not be downplayed. As the United Nations Educational, Scientific and Cultural Organization, UNESCO puts it, “Appreciating local agency and perspectives also allows for including indigenous and informal knowledge into the assessment of risks and the development of strategies to enhance resilience.”

Lauren is a program design specialist committed to promoting food security by co-creating innovations alongside vulnerable communities. She is a technical advisor to two program portfolios in West and East Africa. Her focus is to build up communities to be the drivers of their own change using a participatory and adaptive approach, recognizing that the barriers to food security are complex. By empowering farmers to dissect information about climate, environment, culture, market access and supply, community and household dynamics, Lauren aims to support resilient, self-reliant communities. Lauren actively works towards cultivating teams that develop effective monitoring, evaluation, and learning tools to strategically inform programming to better serve their partner communities. She's a Masters Candidate in Global Policy Studies at the Lyndon B. Johnson School of Public Policy, specializing in evaluative methods and non-profit management. Lauren holds a BSc in Natual Resources and Environmental Science.