Target E from the Sendai Framework is a measure that estimates the number of countries and local actors that have Disaster Risk Reduction (DRR) strategies in place. Its goal is to: “Substantially increase the number of countries with national and local disaster risk reduction strategies by 2020.” However, as it was the case with its predecessor, the Sendai Framework relies on self-assessed scores especially for Target E. Such scores usually include an element of subjectivity which often leads to discrepancies in reporting.

Target E is divided into two indicators E1 and E2; the first assesses national strategies and the second assesses local ones. The indicators are described as follows:

E1: Number of countries that adopt and implement national disaster risk reduction strategies in line with the Sendai Framework for Disaster Risk Reduction 2015-2030.

For E2, the UNDRR defines “local government” as any subnational public administration responsible for DRR whether it is a city council, a municipality, or on a district level. The specificity is to be determined by the country itself.

For E1, countries provide a score of 0 to 1 (with 1 being the highest) to each of the ten sub-indicators enumerated in figure 1. Once all ten sub-indicators have been filled, the total score for E1 is simple summation of the different sub-scores divided by 10 (the number of sub-indicators):

Figure 1: Score to inputted by a country for each sub-indicator

The following scores have been reported for Australia and New Zealand:

Figure 4 provides a breakdown of these scores: 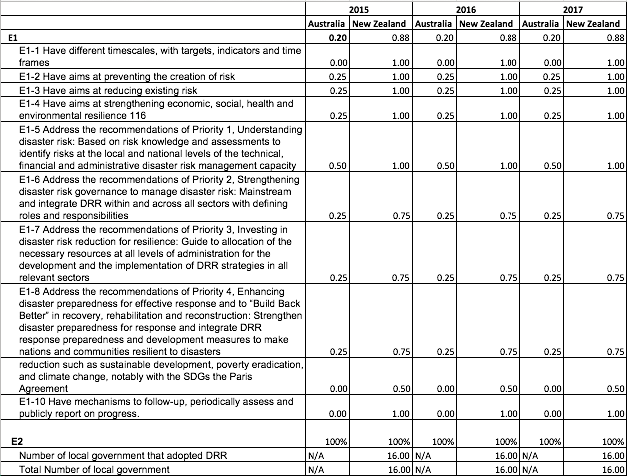 All of these numbers are based on self-assessment and the monitor does not publish a justification for each of the score a country reports. However, we were able to find the 2017 Sendai Framework Data Readiness Review Report for both countries to help understand the reasoning behind the reported scores.

Figures 5 and 6 are answers provided by Australia and New Zealand respectively in their data readiness reports. Only questions relevant to Target E are included here: 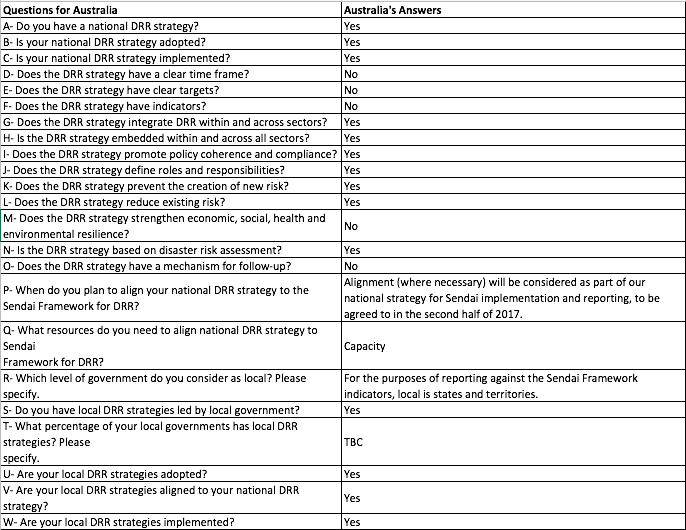 Matching the question/answer to each of the ten sub-indicators one notices a lot of discrepancies. For instance:

All in all, as noted by the United Nations International Strategy for Disaster in 2019:

However, whether or not the scores are objective and reliable, understanding how the scores for Target E are computed will allow us to ask better questions once on the field.

Lara Eid is a Fulbright scholar pursuing a master’s degree in Global Policy Studies at the LBJ School of Public Affairs with an emphasis in International Development and a portfolio certification in security studies from the Clements Center for National Security. Overall, she has 7 years of experience in communications and Middle Eastern affairs. She managed, in 2018, the campaigns of three candidates to the Lebanese parliamentary elections and undertook, from 2016 to 2017, extensive research in French, Arabic, and English on over a hundred designated terrorist organizations. She is also the co-founder and former CEO of Hayda Baytak, a local Lebanese NGO that covers the tuition fees of orphan students. Most of her coursework at LBJ has been focused on migration studies and refugee laws and policies.