My first post reviewed the challenges of creating and maintaining data sets in Oceania. My second discusses how this will affect our research, specifically our maps.

Our goal is to “evaluate the adequacy of preparations for climate-related natural disasters … and identify priority action areas for the U.S. to address climate-related risks in the Asia Pacific.” Our eventual audience will be the Center for Excellence in Disaster Management and Humanitarian Assistance (CFE-DMHA), a Department of Defense organization that reports directly to U.S. Indo-Pacific Command.

In other words, we want to help decision-makers make informed choices by communicating the realities of climate-related risks in Oceania.

To accomplish this, our maps have to actually represent said reality.

The Challenge of Mapping

As the turn of phrase goes, a picture is worth a thousand words.

Images convey information rapidly and effectively. This can make them efficient decision-making tools in complicated circumstances.

It can also make them dangerous.

Maps can only depict reality insofar as the underlying information is complete and current. A map using inaccurate or misleading data is likely misinform its audience if the deficiencies are not readily apparent. While seeming to work, the decision aid would unknowingly lead the decision-maker to potentially erroneous conclusions.

This is an acute problem in Oceania, where data sets are often inaccurate, incomplete, or out of date. To effectively help decision makers and the CFE-DMHA and beyond, therefore, we must take steps to avoid presenting misleading maps.

An inaccurate data set, on the other hand, is difficult to manage for two main reasons.

First, the mapmaker does not always know when information is inaccurate. A data set could be out of date, fail to depict important variation that exists on the ground, or simply be wrong. Data sets rarely come labelled with their defects and a map maker cannot communicate inaccuracies of which she is not aware to her audience.

Second, it is difficult to share data deficiencies effectively on a map even if the mapmaker knows of them.

Maps convey information quickly by their nature. That ease of conveyance comes with a trade-off of nuance. Mapmakers can disclaim deficiencies, but such disclaimers might not be effective. Similar to alert fatigue in healthcare (in which busy workers become desensitized to alerts and thus ignore them), map audiences may ignore disclaimers as they become more numerous and more complicated. Too many disclaimers will also impede a map’s ability to help quickly communicate information, which is the purpose of the map in the first place.

A map full of disclaimers about the inaccuracy of the underlying data will bog down its audience and contradict its primary purpose as a decision aid.

The map below displays their data set on maternal mortality from the Pacific Community, an intergovernmental organization focused on scientific and technical cooperation in Oceania, through their Pacific Data Hub. 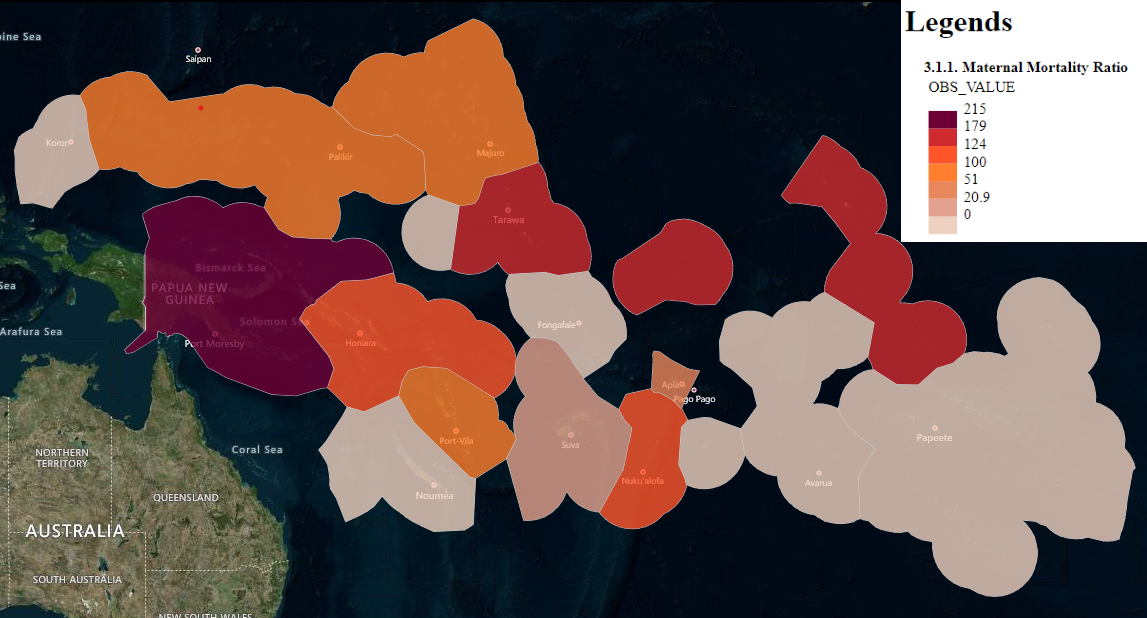 On first glance, the map appears uniform and accurate. Nothing indicates any deficiencies in the maternal mortality data that inform the color scheme.

On a deeper dive into the data set (Table 1), however, there are several issues.

Some of the data are likely inaccurate – it is unlikely that 7 countries have a maternal mortality rate of 0, the lightest color above. This is improbable in a region where countries struggle to ensure “reliable, uninterrupted, and good quality” healthcare services and facilities.

Some of it is out of date – the most recent data set is 2 years old and the oldest are extrapolated from estimates using information up to 30 years old.

All of it fails to distinguish between diverse and dispersed sub-national regions. This is particularly important in Oceania, where countries consist of tiny islands spread over an area slightly larger than North America. On average, countries in our study area have 64 distinct islands – Kiribati, for example, has 33 islands separated by thousands of miles.

A decision maker might be confident that she was making an informed, data-driven choice if she used this map to determine how to handle a climate-related crisis in Kiribati’s easternmost islands.

In reality, the map is likely inaccurate and likely to mislead its audience.

Maps are only as accurate as the information that informs them. This is particularly challenging for making maps of our subset of Oceania. Accordingly, to present meaningful decision aids, we must carefully examine data sets before using them, use only accurate current, and acknowledge and disclaim any known deficiencies.

We also have an opportunity to identify gaps that were not previously apparent and provide recommendations for further research.

While policy practitioners in Oceania are aware of a data gap, there is limited knowledge in the larger policy community. Pointing out where information is missing will help inform CFE-DMHA policy and help guide future research and field work efforts.

Caleb Ray is pursuing an MA in Global Policy Studies at the LBJ School of Public Affairs and a JD from the University of Texas Law School. Before coming to the University of Texas, Caleb earned a BA in Anthropology from Lawrence University in Appleton, WI. He also served as an Agroforestry Peace Corps volunteer the Republic of Guinea and an Americrops volunteer at a Soil and Water Conservation District in Ottertail County, Minnesota. He speaks French and is interested in sustainable management and use of natural resources to facilitate development. His ultimate goal is to be involved with implementing environmentally sustainable development policies, either at home or abroad.