In May of 2019, the Tuvalu Coastal Adaptation Project (TCAP), in partnership with the United Nations Development Programme (UNDP), contracted the company Furgo to conduct an airborne LIDAR survey across nine of Tuvalu’s atoll islands. The purpose of this survey was to collect bathymetry data, or data on the topographic features of the ocean floor, around the islands at a maximum depth of 50 meters. Why did the government choose to prioritize this bathymetry data and why didn’t it exist already?

The State of the Sea Floor

Though it may seem surprising, challenges to precisely and economically measuring bathymetry are so difficult that less than 1% of the world’s ocean floor is properly mapped to a high degree of accuracy. The 99% of remaining bathymetric data that we often see is predicted using satellite imagery data which approximates the shape of the seafloor using gravitational measurement tools with low accuracy. In fact, we know more about the topography of other planets than we do our own ocean floor.

Due to the high cost, much of the efforts on bathymetry data collection methods have been led by mining and oil and gas companies or governments for wartime applications. In modern history, the development of and desire for more accurate sonar technology has increased, particularly with a commercial desire to locate the position of the Titanic. Another rise of particularly high interest occurred after the disappearance of Malaysian Air flight MH370. The tragedy led to a push for the development of more accurate sonar (ship-based) bathymetry data collection technology.

Why is Bathymetry Data Important?

Bathymetry data has applications in many sectors but has a critical function in disaster risk planning. Inundation and freshwater availability, cyclones, tsunamis, erosion and other climate models all depend on highly accurate bathymetry data. Other applications include marine conservation, fishery management, natural resource extraction, natural hazard tracking and many others. According to TCAP Project Manager, Alan Resture, their group’s reason for prioritizing bathymetry data collection was:

How do we Map the Ocean Floor and Why is it Challenging?

Topographic mapping uses LIDAR, or Light Detection and Ranging technology, which is a remote sensing method that uses a laser to pulse light and measure ranges. This can be done in a variety of ways, with helicopters and aircraft being the most common.

Measuring from an aircraft closer to the Earth’s surface gives more accurate results, while satellite-based LIDAR relies heavily on ocean-optics and/or estimation. While these remote sensing methods from planes and satellites can easily measure the surface of the ocean, the challenge for bathymetry lies in the fact that scientists can’t easily model the transfer of light in a water column, where electromagnetic energy, necessary for measurement, gets dissipated.

To get around this, the development of remote sensing from sound waves enabled us to map bathymetry similar to how we map topography. Here, ships emit sonar beams that bounce back to a sensor on the ship. The intensity of their reflection is measured and analyzed to stitch together a picture of the ocean floor (Figure 1). Of course, this method cannot be done by distant satellites or aircraft and requires a lot of money and time to get a wide, complete picture. 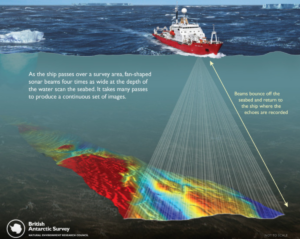 Unfortunately, high-resolution sonar has yet to be perfected for deep ocean measurement, though it still maintains a high degree of accuracy in more shallow waters. Ship-based sonar in shallow waters has its limitations as well, with the sonar beams only able to measure a set area of the ocean floor at a time; they are confined to a certain beam length and their own pathways (See Figure 2). Ships often have to make many passes on a similar route to stitch together a complete image. Additionally, as large ships are confined to certain depths, this makes it difficult for ships to get close to shore to measure bathymetry close to the land on a large scale. 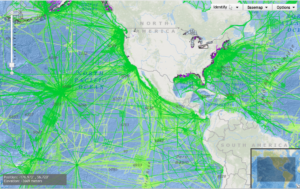 Figure 2. An image of the extent of coverage of bathymetry data mapped on the ocean floor.

Many scientists are interested in collecting accurate bathymetry data close to shore, leading to a data gap where boats cannot reach and aircraft LIDAR cannot penetrate through the water. Thankfully, a few recent developments have allowed us to find methods to estimate bathymetry to a high degree of accuracy: 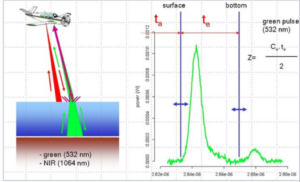 One promising method for bathymetry data collection is Airborne Laser Hydrography, which is the method used in the Tuvalu study (Figure 3). This method involves using an infrared light that scatters off the surface, combined with a water-penetrable green light (usually at 532nm) that scatters at the seafloor. The plane’s sensor measures the time it takes between the infrared and green lights to quantify the depth at that location.

Although this method can’t be used accurately for depths over approximately 50 meters, this is a fast and comparably economical method for gathering data. These images can be combined with traditional sonar wave measurements from boats to paint an accurate picture of the bathymetry close to the shore. Figure 4. An image of a combined method of collecting bathymetry data by air and boat.

Unfortunately, air and ship data collection methods also come with a hefty price tag. The average price for ship-collected data is approximately $1,000 per ship, per hour. It’s unlikely that these measurement techniques will be able to be implemented across the globe, much less for all of the vulnerable areas that need it. One cost-effective development that might prove more feasible for tracking bathymetry economically over time is satellite-derived near-shore bathymetry or SDB. Recently, a study on atolls in the Marshall islands used SDB spectral band ratio-based techniques (commonly called the natural logarithm approach) that produced highly accurate results at 6 meters. This method of analyzing images for light and color and predicting water turbidity could be a promising alternative to costly air-based and ship-based data collection methods.

Tuvalu will be ahead of its neighboring countries who are facing similar climate adaptation problems without this baseline data. Unfortunately, with current economics and accuracy levels of remote sensing bathymetry technology, it is unrealistic to expect that every island with high climate vulnerability will be able to map their data to a high degree of precision. Advancements in SDB and increasing accuracy of these techniques will hopefully soon provide a cost-effective means to gather bathymetry data so that vulnerable populations can best prepare themselves to plan for the changes ahead.