↓ Skip to Main Content
Home › Agriculture/Water › In Oceania, Fisheries are Life. And They are Disappearing. (Part 2)

In Oceania, Fisheries are Life. And They are Disappearing. (Part 2)

Fisheries play a prominent role in the cultural identity, economy, and ecology of Oceania. Climate change and other man-made drivers of biodiversity loss, such as illegal, unreported, and unregulated (IUU) fishing, are decimating the fisheries that Pacific Islands rely upon for their subsistence and survival.

In part two of this three-part blog series (see also: part one and part three), I’ll talk through the state of Oceania’s fisheries as they face the compounding threats of climate change and IUU fishing. I’ll end this post with a spotlight on the fishing activities of a country that has recently been making waves in the region: China. 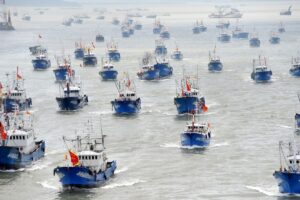 The Chinese fishing fleet has become increasingly active all over the world, including in Oceania. Photo courtesy of the South China Morning Post.

Today’s global fisheries are in crisis. Climate change threatens the chemical balance of our oceans. Human utilization of marine resources worldwide has led to the overexploitation of 30% of global fish stocks. Fish species that are integral to the diets of over 3.2 billion people and account for 17% of the world’s animal protein are being fished at biologically unsustainable levels. This overall drop in fisheries health will have negative consequences not only for the people of Oceania, but of the global population.

Climate change is a major driver of oceanic biodiversity loss

The consequences of climate change are being felt across the world, but especially in Oceania. Pacific Island countries and territories are facing increasing ocean temperatures, rising sea levels, ocean acidification and deoxygenation, coastal erosion, and saltwater intrusion into crucial freshwater resources. In response to greenhouse gas emissions, the world’s oceans are doing the bulk of the mitigation work, absorbing 93% of the heat generated by carbon dioxide in the atmosphere and sequestering carbon dioxide. As a result, oceans are becoming more acidic, oxygen levels are decreasing, currents are shifting, and sea surface temperatures are on the rise.

Oceania’s tuna fisheries will feel the consequences of climate change

A 2017 study published in Marine Policy found that if emissions continue under a ‘business as usual’ scenario, Oceania can expect to lose between 50-80% of its marine species by 2100. Within the next thirty years, the Cook Islands, Federated States of Micronesia, Niue, and Tuvalu are expected to undergo a 50% decrease in their maximum fisheries catch. Oceania’s fisheries are facing the same existential threat as fisheries around the world.

Climate change in the Oceania commercial tuna fishery will produce winners and losers. Tuna are highly mobile species with migration patterns that cover large swaths of the ocean, spanning twenty Pacific Island nations’ EEZs and international waters. These tuna favor warm currents and as climate change prompts a shift in currents, tuna are expected to move east in alignment with this warmer water. In the near term, islands such as Fiji, Vanuatu, Cook Islands, French Polynesia, Tuvalu and Kiribati will benefit from increased numbers of tuna within their EEZs. In comparison, nations such as Palau and Papua New Guinea that have traditionally benefited from an abundance of tuna in their EEZs will see their economic staple diminish as tuna move eastward. In the long term, as tuna migrate east they may vacate Pacific Islands’ EEZs to the point where these nations’ EEZs are no longer profitable tuna fisheries at all.

In her analysis of this climate change-induced phenomenon, Conservation International’s Sarah Hauck identifies another complication: as tuna move farther out of EEZs and into international waters, risks of IUU fishing will increase.

IUU fishing is an additional threat to Oceania’s fisheries

According to the Western and Central Pacific Fisheries Commission, or WCPFC, for the four species of tuna that are of commercial importance to Oceania – bigeye, skipjack, South Pacific albacore, and yellowfin – none are currently considered ‘overfished’ in Pacific Island states’ EEZs. In Oceania, although there is no one unified intergovernmental organization governing fishery resources, groups like the Pacific Islands Forum Fisheries Agency (FFA), the Pacific Community (SPC), and the WCPFC are actively working to strengthen the capacity of Pacific Island states to effectively manage the tuna fisheries within their EEZs. The problem is that although these programs provide monitoring and scientific support for tuna fisheries, these management activities occur within EEZs. In international waters, regulation and monitoring are limited, which allows for exploitation through IUU fishing.

IUU fishing refers to all fishing that breaks fisheries laws or occurs outside the reach of fisheries laws, and is a multibillion dollar global illicit industry that occurs primarily in international waters. IUU fishing not only leads to ineffective regulation of fisheries because it is impossible to gain an accurate status of each species, but it also causes environmental damage, loss of key species for fisheries and the ecosystem, bycatch of species like dolphins and turtles, and criminal activity on the high seas.

Determining the prevalence of IUU fishing in Oceania is a regulatory challenge for the same reason as in other oceanic systems – we lack data. Not only is it difficult to monitor and catch IUU fishing activities in international waters, but many countries in Oceania do not have the capacity or coordination ability to police illegal fishing activities in the region, leaving them vulnerable to exploitation without recourse.

All eyes on China

With approximately ⅔ of the world’s tuna resources in Oceania, a significant portion of Pacific Islands’ fisheries revenue comes from selling access to EEZs to extra-regional countries’ fishering operations. In 2014, South Pacific Island countries earned over US$340 million in fishing licensing fees from a range of countries, notably Japan, the U.S., China, Australia, New Zealand, and Canada.

Several of my colleagues have written eloquently about China’s desire to expand its influence in Oceania (see posts by Charlotte, Chris, Claire, and Jonah). As we discuss the impacts of China’s movement into the region, it is important to acknowledge that China is also, in part, motivated to gain access to Oceania’s profitable yet dwindling fisheries resources.

The Chinese populace eats twice as much seafood as the global average. China’s growing economy coincides with an increased demand for high-value tuna and an expanding long-distance tuna fleet, capable of fishing the vast waters of Oceania.

Chinese fishing is a growing presence in the region, with China now accounting for the largest share of foreign-operated vessels in Oceania’s EEZs (600 Chinese ships out of 1,300 total). Not only has this facilitated competition with other extra-regional countries over finite tuna resources, but is pushing Pacific Island nations’ operations out of the market because they do not have the capacity to compete.

Although access to fisheries is by no means the only reason China is showing an interest in Oceania, it is an important component of their motivations in the region. The U.S., Pacific Island countries, and other interested parties should take this into consideration when interpreting other actions by China to grow their soft power influence in the region.

The outlook for Oceania’s fisheries is bleak. If the world maintains business as usual, climate change and IUU fishing will continue to put the people of Oceania in a situation where they will face the consequence of a problem they did not create. What options are left to them when it comes to dealing with the state of fisheries today?

In part three, I’ll explore this question through the lens of one potential remedy: migration.

One comment on “In Oceania, Fisheries are Life. And They are Disappearing. (Part 2)”