↓ Skip to Main Content
Home › Managed Retreat/Migration › When is a refugee not a refugee?: ‘Climate migrants’ in Oceania

When is a refugee not a refugee?: ‘Climate migrants’ in Oceania

Climate change is reshaping Oceania. Rising sea levels are physically changing the boundaries of island nations, rendering some coastal areas uninhabitable and leading to saltwater contamination of freshwater resources. Increasing ocean temperatures are causing fundamental shifts in fisheries’ food webs, with consequences for both sustenance and the economic livelihoods of Pacific islanders. In the potential eventuality that the international community cannot stem the tide of climate change before rising sea levels overtake the islands of Oceania, what does this mean for the people who have lived in this region for countless generations?

For this blog post, I ask what climate change means for the people of Oceania, who have joined the ranks of the legally disenfranchised ‘climate migrants.’ 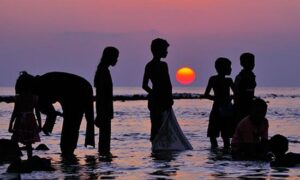 The coastal lives of Pacific Islanders make them particularly vulnerable to the effects of climate change. Photo courtesy of the Pacific Media Center archive.

Pacific Islanders are one of the most vulnerable communities in the world when we talk about the impacts of climate change on their way of life. The highly oversimplified logic is: Climate change causes rising sea levels, islands are inundated with salt water, and then residents are forced by these changing conditions to leave their homes and islands behind.

In the common definition, a refugee is “a person who has been forced to leave their country in order to escape war, persecution, or natural disaster.” The people of Oceania are increasingly being described as ‘climate refugees’ but this terminology, though intuitive, oversimplifies a complex reality: Pacific islanders, and their fellow ‘climate refugees’ around the world, do not actually have any legal standing as refugees in terms of international law. While this problem is salient for our study of Oceania, climate refugees are a global concern that will escalate in the coming years. According to a World Bank analysis of sub-Saharan Africa, South Asia, and Latin America, climate change could lead to displacement of over 143 million people by 2050.

The definitive document on refugees remains the 1951 UN Convention and Protocol Relating to the Status of Refugees (the 1951 Convention was updated with the 1967 Protocol), which defines a refugee as “someone who is unable or unwilling to return to their country of origin owing to a well-founded fear of being persecuted for reasons of race, religion, nationality, membership of a particular social group, or political opinion.” The Convention and Protocol outline the responsibility of a host government, which must protect refugees who come to their shores by guaranteeing them basic human rights. These documents also prohibit refoulement, meaning that a host government cannot forcibly return a refugee to their origin country where they fear persecution. The sticking point here is two-fold: the mid-20th century Convention and Protocol do not address the effects of climate change on habitability of regions sensitive to climate, nor do they allow for someone to be considered a refugee without a credible “fear of persecution” in their home country.

For those impacted by climate change, the lack of legal standing as climate refugees leaves them in a state of legal limbo, where they are not afforded the same protections as internationally recognized refugees. The UN took a step toward protecting climate refugees in the 2018 Global Compact on Refugees, which recognized that “climate, environmental degradation, and natural disasters increasingly interact with the drivers of refugee movements,” yet stopped short of formally including as refugees those who are displaced due to these climate-related drivers.

According to Dina Ionesco, UN Migration Agency Head of the Migration, Environment and Climate Change (MECC) Division, there are several reasons to be hesitant to push for a climate refugee distinction, including the primarily internal nature of most climate migration, the necessity for countries to think about adaptation rather than only migration, and the difficulty of isolating environmental and climatic drivers of migration from “humanitarian, political, social, conflict, or economic ones.” And so, in lieu of a refugee distinction, people who migrate as a result of climate change and its impacts are referred to as ‘climate migrants’ with no additional legal protections when they decide to leave their home country.

What does it mean to be a climate refugee in Oceania?

And yet, the lack of refugee status protections for the people of Oceania may be changing. This discussion is the most prominent as it pertains to Kiribati, the Pacific island nation that the IPCC suggested “could become uninhabitable as early as 2050.” In late January, in response to a case brought by Ioane Teitiota of Kiribati, the UN ruled that non-refoulement applies to those who flee their homes due to climate. According to the UNHRC ruling, “without robust national and international efforts, the effects of climate change in receiving states may expose individuals to violations of their rights … thereby triggering the non-refoulement obligations of sending states.”

Although this ruling stopped short of considering Teitiota a climate refugee, it did open the door to further cases in the future as the climate outlook becomes more bleak for the people of Oceania, stating “given the risk of an entire country becoming submerged under water is such an extreme risk, the conditions of life in such a country may become incompatible with the right to life with dignity before the risk is realized.”

As potential refugees from Oceania remain in legal uncertainty, the migration team are working to further understand this dynamic in the larger picture of forced migration in Oceania. We are currently attempting to identify the most at-risk areas, where people are most likely to migrate to, what climate change means in terms of peoples’ capacity to move, and what structures are in place to deal with migration in Oceania.