(This blog post completes my three-part series on France’s role as a stakeholder in our considerations of grand strategy. You can find part 1 here and part 2 here.)

What are the French stakes in disaster risk reduction in Oceania? And how does the French role influence the United State’s challenges, risks, and opportunities for engaging in this space?

France has been a security and humanitarian actor in the region long before the recent surge of interest in the Pacific. Looking at the facts and figures, French armed forces are stationed in New Caledonia and French Polynesia. France has played a major role in more than 15 relief operations in the Pacific region over the last 25 years in Fiji, Vanuatu, the Solomon Islands, Niue, Papua New Guinea, Tonga, Tuvalu and the Cook Islands.

Broadly, foreign policy is important to the French, being central to national identity. The president has extensive authority on matters of defense and national security. The past is a major force in the present: when now-President Emmanuel Macron was running for office, he cited the so-called “Gaullo-Mitterrandist consensus”, the foreign policy worldview inherited from former French presidents Charles De Gaulle and Francois Mitterrand, as his guiding light. It makes sense that presidents of the Fifth Republic would have to define themselves in reference to the man that founded it, but Macron has proved to be mostly traditionalist in his foreign policy. As opposed to the more interventionist approaches of his predecessors Nicolas Sarkozy and François Hollande, who fostered closer ties with the US and NATO, Macron has focused more so on European affairs. 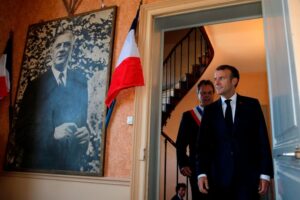 French President Emmanuel Macron (R) looks at a portrait of former French President Charles de Gaulle at the city hall in Colombey-les-Deux-Eglises, on October 4, 2018 during a trip to mark the 60th anniversary of the French Constitution. (Photo by VINCENT KESSLER / AFP)

How does this affect the state of play in Oceania, though? Regardless of who is occupying the Élysée Palace, France’s international standing benefits from its willingness to offer money and manpower in times of need. Emergency humanitarian action has been a regular feature of the last several diplomatic strategy documents issued by the government.

What the Future Holds

Given the escalated Chinese presence in Oceania, it’s a possibility that France will move towards greater engagement with the region. Conversely, France may not want to wade into a US-China geopolitical game. If the US embarks on re-engagement in Oceania, this could signal a containment strategy. Though China has become a strong ally of some Pacific island states by increased its investment and aid, none of the three central French-linked states have been major targets for Beijing. Even if the overall balance of power in the region shifts, it may not be the case that French policies will change if their core interests are unaffected. These are not the only two routes, though. France may well institutionalize multilateral cooperation with peer states like Australia, India, Japan and ASEAN on military, economic or diplomatic issues where interests converge.

As Françoise Nicolas of the French Institute of International Relations commented in the East-Asia Forum, in a sense Paris is damned if they do, damned if they don’t: “Some Western analysts picture France’s move as a desperate (and vain) attempt to regain its past grandeur and most of them consider the strategy doomed to fail, while Chinese commentators criticize France for following in US footsteps to contain China’s rise.” The French Indo-Pacific strategy released in 2019 seemed to many to reflect a more comprehensive vision of the Indo-Pacific beyond just its own citizens and territories, which felt new both in terminology and approach.  The strategy seems to incorporate defense, economic, and environmental concerns with a special emphasis on maritime routes for freedom of navigation and trade purposes. Ultimately, though France is as self-interested as anyone else, French interests are served by a stable, rules-based international order based on the rule of law where trade and the movement of people are free.

The FRANZ Agreement, highlighted in my last post, has a monopoly on emergency response and so is influencing actors to find their own niches. The question is: should FRANZ stay laser-focused on what it does, or does it need to expand beyond beyond simple emergency management and investing in disaster risk reduction and capacity building? An instructive case study here is the French response to Cyclone Winston, a Category 5 cyclone that wreaked havoc on Fijian islands in February 2016. The government of Fiji requested international assistance the day after the disaster, and a United Nations Disaster Assessment and Coordination (UNDAC) team coordinated civil-military response between the Royal Fijian Military Forces and the FRANZ partner forces. Given the diversity of capabilities and languages, the response appears to been rapid, sustained, and informed by lessons learned from other recent disasters. France has proven success in working with Australia, New Zealand, and regional and multilateral partners, but new entrants into the security landscape (I’m thinking of the United States, China, Japan here) are untested quantities. 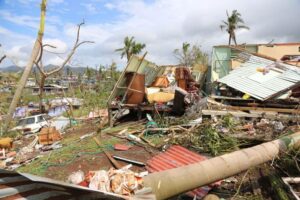 In terms of French engagement with other Oceanic states that it does not have close historic ties with, stay tuned for my next post on multilateral organizations in the region. As the 2019 United Nations Global Humanitarian overview stated, “With the threat of the next major disaster constantly looming, governments and regional bodies have achieved important progress in recent years in increasing their capacity for disaster response. As a result, countries in the Asia and the Pacific region are now less likely to appeal for international assistance but more likely to request support in specific areas that complement their national and regional capacities.” Aside from FRANZ and bilateral French support to its former possessions, French engagement would be expected primarily through international organizations like the UN.

President Macron is expected to visit Fiji in mid-April to host two major conferences (assuming that travel restrictions from the worldwide Coronavirus, COVID-19, outbreak do not hinder the events). The fourth France-Oceania summit of the countries belonging to the Pacific Islands Forum and the One Planet Summit will take place over three days. Macron will be only the third French president to visit Oceania. French Polynesian president Edouard Fritch has said that climate change will be a priority of his at the One Planet Summit. Given that other issues, such as economic development and the legacy of French nuclear testing, are on the agenda, neither climate change nor international security will get the full limelight.

Macron’s visit comes on the heels of New Zealand Prime Minister Jacinda Arden’s widely-lauded announcement in Fiji last week that New Zealand will be contributing an additional $2 million dollars to the $150 million package of climate change assistance to resettle populations at risk from displacement due to rising sea levels. It will be interesting to follow the developments coming out of these two conferences. France should not be counted out as an important player in the Pacific.