↓ Skip to Main Content
Home › Disaster Preparedness › How Prepared is the Kingdom of Tonga?

Question 1: Does Tonga have a DRR strategy in place?
The short answer is yes.
Question 2: Has it been proactively reporting on the Hyogo and Sendai frameworks?
While Tonga has a strategy that is mostly in line with the Sendai and Hyogo platforms, said strategy is not fully reflected on the Sendai monitor.

In Oceania, only Australia and New Zealand have effectively reported their scores on the Sendai Monitor for Target E which is a measure that estimates the number of countries and local actors that have Disaster Risk Reduction (DRR) strategies in place.

However, while Tonga has not yet done so, the Kingdom has submitted its data readiness report that reviews the availability of data needed to measure the global targets of the Sendai Framework. By glancing over the answers that Tonga provided for Target E, we can infer that Tonga does have a national and local DRR strategy in place. It follows that if Tonga were to actually report final Target E scores, said scores would most likely be in the high margins.

However, with the absence of a definition of what constitutes a “sound” DRR strategy, high scores do not necessarily mean that the DRR strategy in place is adequate nor that it is comparable to other countries; each country might have a different concept of DRR. Moreover, Tonga answered “N/A” to questions 16 and 17 which means that it has not yet fully engaged with the Sendai platform.

In his address at the 6th session of the Global Platform for Disaster Risk Reduction in May 2019, Mr. Mafua I Vaiutukakau Maka, director of Tonga’s National Emergency Management Office (NEMO) pledged Tonga has established “a work plan to guide a structured process ensure that the data gaps are addressed including the development of consolidated assessment templates.”

Tonga seems to have made some progress since it last reported on the Hyogo Framework for Action in 2012. The country admitted then to having shortcomings when it comes to establishing systematic policies and instilling institutional commitment; but with JNAPII (covered in the section below), Tonga seems to be on the right track towards disaster preparedness.

Question 4: What is the status of implementation?
The short answer is Work in Progress
Question 5: What are the biggest barriers to implementation?
Lack of capacity, funding, and technological know-how

In 2010, Tonga was a pioneer in its adaptation of a Joint National Action Plan (JNAP) which provides guidelines for the government to build resilience and reduce disaster risks through an iterative process. In 2018, a revised version of the plan (JNAPII) was released. The plan highlights six targets and strategies to be implemented by 2035:

The targets laid out are consistent with the Hyogo and Sendai frameworks and are in line with international and regional agreements such as the Paris Climate Agreement and the Resilient Development in the Pacific.

JNAPII aims to provide Tonga with a “country-as-a-whole” approach to disaster management and accounting tools. It was developed with support from the European Union, Gesellschaft für Internationale Zusammenarbeit (GIZ), Green Climate Fund, USAID and the joint UNDP-UN Environment NAP-GSP. According to the Tongian Acting Prime Minister Vuna Fa’otusia, through the embedded accounting systems, JNAPII will:

“Be able to increase the technical capacity of our government and NGO’s and be able to learn more about the projects we will implement in the future. Through this new knowledge we will be better equipped in the adaptive management of resources and close in on achieving our sustainable development goals.”

Despite this pioneering endeavor, as a developing nation, Tonga is still short on funds, capacity, and technological know-how. A full implementation of JNAPII and, by extension the Sendai Targets, can only take place if there is a steady flow of investments from international multilateral funds. In 2012, when the Kingdom responded to the Hyogo reporting questionnaire, there were over 21 occurrences where the government stated in its responses that there is a need for: “capacity”, “financial”, and technological resources.

To be sure, the financial and technological know-how have improved since 2012 especially that the first JNAP succeeded in attracting donor support for resilience projects. However, there is much to be done, for instance, with regards to improving coordination of donors. Some of the financing of JNAPII will be done through the Tonga Climate Change Fund especially for the Plan’s objective #5. Nonetheless, with an indicative budget for JNAPII estimated at USD 147,173,000, Tonga will definitely be on the lookout for additional funding for the years to come. 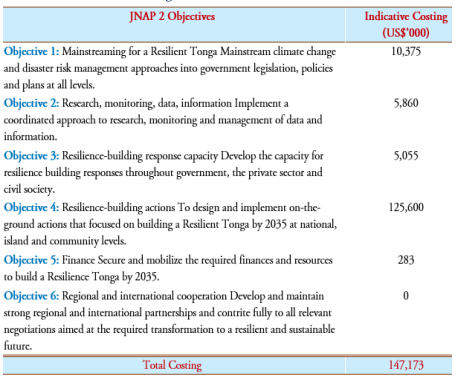 Lara Eid is a Fulbright scholar pursuing a master’s degree in Global Policy Studies at the LBJ School of Public Affairs with an emphasis in International Development and a portfolio certification in security studies from the Clements Center for National Security. Overall, she has 7 years of experience in communications and Middle Eastern affairs. She managed, in 2018, the campaigns of three candidates to the Lebanese parliamentary elections and undertook, from 2016 to 2017, extensive research in French, Arabic, and English on over a hundred designated terrorist organizations. She is also the co-founder and former CEO of Hayda Baytak, a local Lebanese NGO that covers the tuition fees of orphan students. Most of her coursework at LBJ has been focused on migration studies and refugee laws and policies.