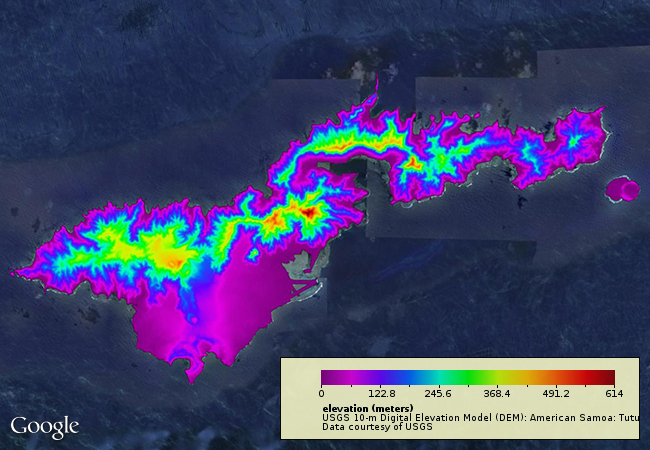 Figure 3: Juxtaposed Maps; shows all urban centers except A’oloau (D) are situated in less than 100 meters elevation. The three largest cities (Pago Pago (A), Tafuna (B), and Leone (C)) all lie in areas near sea level.

Additionally, juxtaposition of the topographic and population density maps allows insight into which islands may have overpredicted populations at risk and vice versa. Table 1 breaks island groups into three tiers based on the percent of population that is within one kilometer of the coastline. The tiers are:

However, including mean elevation shows that a tier-2 state such as the Wallis and Futuna Islands may have a much higher at-risk population due to a low average elevation on Wallis island, which hosts about two-thirds the territory’s population. Conversely, with 93% of its population within one kilometer of the coastline, Nauru is defined as a tier-1 state, but it is a rock island with an approximately 30-meter plateau just off the coast. Internal migration appears quite feasible in the case of Nauru.

Once a general idea of populations at risk can be determined, likely locations of migrant flow can be estimated based on historical migration and external relations. The United States has a Compact of Free Association (COFA) with the Federated States of Micronesia, Marshall Islands, and Palau. The Northern Mariana Islands are part of the US commonwealth, while Guam and American Samoa are US territories. The Solomon Islands, Fiji, Tonga, Kiribati, Nauru, Tuvalu, and Vanuatu are all members of the British Commonwealth of Nations and former British colonies. Cook Islands and Niue are in free association with New Zealand, while Samoa is a former colony. French Polynesia, New-Caledonia, and Wallis and Futuna are all collectivities of France. Vanuatu, in addition to being a member of the Commonwealth of Nations, is a member of the Organisation Internationale de la Francophonie. Finally, Nauru is also a member of the Commonwealth, but has particularly close ties with Australia. Table 2 summarizes these relations.

The COFA agreement between the US and Micronesia, Marshal Islands, and Palau allows most citizens to live and work in the US. Residents of the Northern Mariana Islands, American Samoa, and Guam are US citizens. Therefore, most of the 443,000 people in these territories, 280,000 of whom live within one kilometer of the coast, have a legal right to live in the US.

Commonwealth of Nations citizens lack the right to live in the United Kingdom. However, a major argument for Brexit centered on the idea that immigration quotas would increase for Commonwealth citizens after limitations were initiated on European migration. Despite the Brexit campaign’s victory, it is currently unclear if more Commonwealth citizens were admitted to the UK. Of the nearly 1.7 million residents of these states, nearly 870,000 live within one kilometer of the coast. This group represents the largest population of at-risk people without a clearly defined migration route. Kiribati, Tuvalu, and Tonga all have six figure populations, average elevations lower than 5 meters, and only Tonga, with 84%, has less than 100% of its population within one kilometer of the coast.

All 783,000 residents of French collectivities are French citizens by birth and have the right to move to other French territories abroad or within Oceania; 523,000 live within one kilometer of the coast.

The 16,000 residents of the Cook Islands and Niue are New Zealand citizens and have the right of residency in New Zealand. New Zealand also has an existing quota system of 1,100 Samoans, 250 Tongans, 75 Kiribatis, and 75 Tuvaluans per annum. However, the combined populations of these states is just over 400,000 with 334,000 living within one kilometer of the coast.

Nauru has a population of about 10,000, with 93% being at-risk. Its close relations with Australia make it likely that Australia would be willing to absorb the population in the case of forced migration. The government had previously offered citizenship to Nauruans in the 1960s.

Of greatest importance in humanitarian terms are the peoples in countries with limited options for migration. The islands associated with the UK (Kiribati, Tuvalu, Fiji, Tonga, Vanuatu, and the Solomon Islands) represent about 65% of the population of Oceania and just over half of them live within one kilometer of the coastline. These states also lack existing immigration programs with other countries. Fiji, however, represents a state that could host populations from other states due to its relatively large land area and high elevation. Kiribati has previously bought land on Fiji.

The other 35% of Oceania has preexisting immigration arrangements. Nearly all residents of the French collectivities, American territories and free associations, and New Zealander free associations have citizenship and guaranteed rights to relocate into French, American, or Kiwi territories. Samoa represents the sole outlier but existing avenues of immigration to New Zealand, Australia, and the US signal a constituency to publicly support hosting refugees.

The US, thus, needs to be prepared to accept up to half a million people from its territories and free associations in the region. It also should develop contingency plans for the people of Commonwealth states that lack existing migration options. Should the UK resist or reject citizens of these states, the US should be prepared to identify other countries that may host populations in addition to itself. Australia and Canada may be prime candidates.

Aaron Wolfson is a third-year graduate student at the LBJ School of Public Affairs and the Center for Middle Eastern Studies. Aaron graduated from the University of Minnesota - Twin Cities with a BA in international relations. His research mostly focuses on Islamist policies and US foreign policy in addition to broader Middle Eastern concerns. He has recently worked with the Bahrain Young Ladies Association and the Armed Conflict Location and Event Data (ACLED) project.