Together, these three methods of flooding interact and compound on each other thus increasing the severity of a flooding event when occurring simultaneously. Lately, this effect has been getting more attention and is being analyzed specifically in the context of extreme weather events in the United States. However, the complexity at which these flooding mechanisms converge in coastal areas is difficult to model and forecast, therefore it is left out of the majority of preventative planning. This makes it incredibly dangerous in urban settings, as storm water infrastructure is not built to withstand the proper capacity, causing failures in areas that were thought to be resilient and protected. With 68% of the population residing in coastal urban areas in Oceania, it can be particularly dangerous for citizens.

Hurricane Harvey is a commonly cited recent example of the effects of compound flooding. Storm surge from one direction and rainfall from the opposite surrounded downtown Houston as the water had nowhere else to travel. Specific to Oceania, similar patterns can be observed during Cyclone Winston, the most intense tropical storm on record in the Southern Hemisphere. Storm surges carried water 600 feet inland. Already saturated rivers due to heavy rainfall only added to the inundation level. 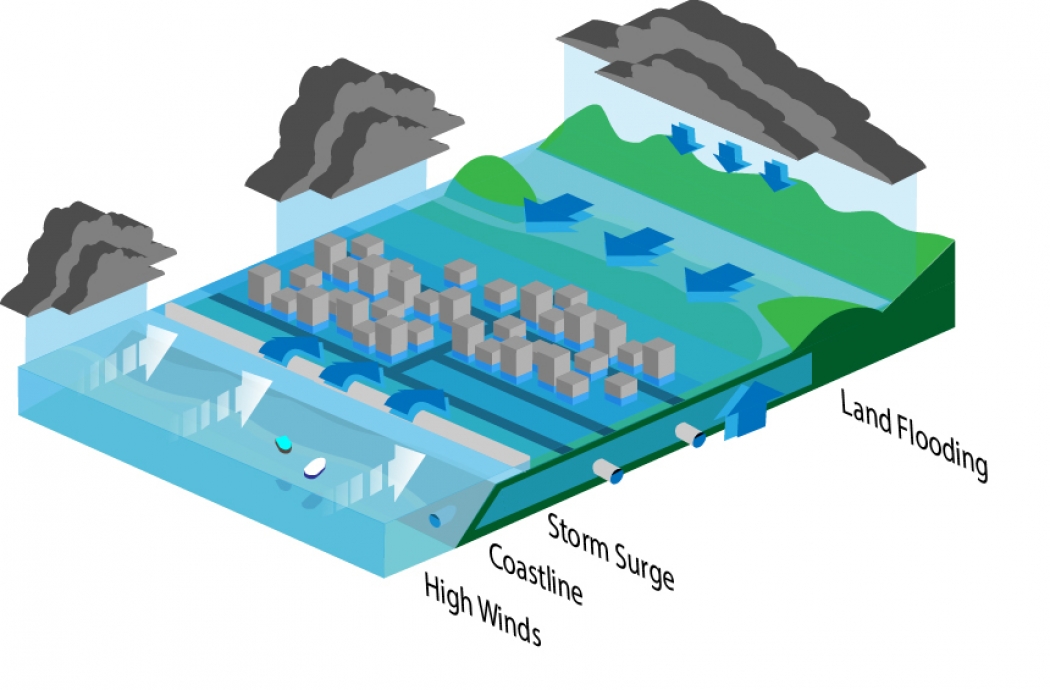 Compound flooding and inundate coastal urban areas from all directions

Globally, the number of hydrometeorological disasters has increased exponentially between 1950 and 2000. Whether this can be attributed to climate change or not is inconsequential because extreme weather events will continue to affect people regardless of its cause. Regionally, there have been numerous studies to forecast the climate changes. Unfortunately, there is a high degree of uncertainty around rainfall patterns. Projections suggest that the dry season will get dryer and the wet season wetter, meaning annual rainfall could stay constant. This is however a major threat when it comes to flooding. Less frequent but more extreme rainfall days (compared to more frequent and less extreme rainfall days) have a higher chance of leading to catastrophic flooding. Similarly, less frequent but more intense tropical storms, another predicted trend in the region, overloads limited storm infrastructure.

Sea level rise is a known threat in the region, being featured often in popular news stories from NPR, The Guardian, National Geographic, and other sources fairly consistently. This can overshadow the threat of other flooding sources though, which must be considered in resiliency planning. Here are three examples of deadly flooding in Oceania not caused from sea level rise that have all occurred in the past two weeks at the time this blog post was published.

In the Papua province of Indonesia, flashfloods are triggering mudslides burying complete neighborhoods. Some of the early reports indicate more than 4,000 homes have been abandoned and over fifty people have been killed. This flooding threat has been exacerbated due to local deforestation in conjunction with intense upstream rainfall. The combination of in place rainfall (pluvial flooding) and upstream rainfall (fluvial flooding) is causing riverbanks to overflow as well as destabilizing slopes causing deadly debris flows (ex. mud, land, and rockslides). While Papua province may not be directly in the Oceania region we have been focusing on in this course, what they are experiencing is not an isolated occurrence.

Earlier this month parts of Guadalcanal Island in the Solomon Islands experienced 365 millimeters of rain in less than 24 hours. Residents are being advised to move away from rivers and streams and also to avoid unstable roadways in the region. From this storm along, eight people are presumed dead after being buried by landslides.

Compound flooding and the co-occurrence of rainfall events and storm surges pose a serious threat to coastal urban areas around the globe, including Oceania. However, the majority of the research into this phenomenon occurs in other regions of the world (i.e. Australia, the UK, the USA, China). More work needs to be directed towards quantifying the potential effects of compound flooding in small island developing states. This is increasingly important as rainfall trends suggest this will occur more frequently in the region.