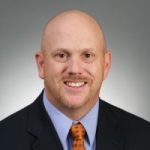 Dr. Stoner received his Doctor of Pharmacy degree from the University of Nebraska College of Pharmacy in 1994. He has been with UMKC since 1996 when he joined as a Clinical Assistant Professor, following his post-doctoral completion of an ASHP Accredited Psychiatric Pharmacy Practice & Administration Residency and a Psychiatric Pharmacy Fellowship at Western Missouri Mental Health Center in Kansas City, Missouri. In 1997 he was awarded an NCDEU-NIMH Young Investigator Award and in 2001 the CPNP AstraZeneca Clinical Pharmacy Practice & Administration Award. Dr. Stoner has also been the recipient of both teaching and preceptor of the year awards while at UMKC. Dr. Stoner served as the director of an ASHP accredited psychiatric Pharmacy Practice & Administration residency program for 10 years (1998-2008) at the Northwest Missouri Psychiatric Rehabilitation Center in St. Joseph, Missouri.  In 2006, he completed the American Association of Colleges of Pharmacy Academic (AACP) Leadership Fellows Program. Dr. Stoner has been a member of CPNP since 1997 and has served on numerous committees, including terms on the Board of Directors as Member-at-Large and President (2010-2011). Dr. Stoner currently serves on the Board of Directors for the CPNP Foundation. Dr. Stoner is also a member of the American Association of Colleges of Pharmacy, and has served on a number of committees as well as serving on the AACP Board of Directors (2016-2019), as the Chair of the Council of Sections (2017-2018), and the Chair of the Pharmacy Practice Section (2014-2015).  He is currently a Clinical Professor and the Department Chair of the Division of Pharmacy Practice and Administration at the UMKC School of Pharmacy.

Disclosure: Dr. Stoner has the following relevant financial relationships, potential or perceived, with commercial or conflicts of interest to disclose:

Review of Conflicts Policy:  The UT Austin College of Pharmacy has a very strict policy to ensure against commercial conflicts of interest in CE programming.  For this conference, the planning committee picks two committee members who have appropriate backgrounds to review content, and report any potential conflict of interest to the CPE Director.  If conflict issues are discovered, they are addressed with speakers to make appropriate changes. Evaluations are collected from all participants with specific questions around the listed conflicts of commercial interest.