Small states by definition are too small to be good at everything. So they tend to bundle their resources to excel at one or two things. Like chocolate, or watches. But small states are also laboratories for ideas–like the plan to make Sweden an oil-free society by 2020. The Swiss contribution to the global melting pot of ideas is direct democracy. In Switzerland, a sufficient number of signatures can force a popular referendum on any federal law or can require a vote on a constitutional amendment on any issue imaginable.

The advantage of this system is that politicians are forced to come up with laws that most likely would withstand the test of a popular referendum. So compromise is essential for the system to work. The drawback is that ordinary people like you and I could come up with something really stupid at the kitchen table and get enough signatures to force a popular vote on it—like the successful initiative to ban minarets in Switzerland. This creates opportunities for populist groups to bypass the parliamentary system altogether. This can be a good thing as long as an educated electorate can be trusted to act in the interest of the republic. This assumption will be seriously tested in the votes coming up in Switzerland this coming Sunday, November 30.

Swiss direct democracy is the envy of democratically-minded people all over the world. But the tool of the constitutional initiative has been mostly used by populist groups on the left and on the right who do not have broad parliamentary support. While leftist initiatives, like the constitutional amendment to abolish the Swiss Army, have failed consistently, the initiatives and referendums launched by the right frequently have been successful, like the vote against Swiss membership in the European Economic Area in 1992 or the vote to curb “Mass Immigration” earlier in 2014.

It has become fashionable among the populist right in Europe to promote direct democracy, most prominently the United Kingdom Independence Party (UKIP) in Britain and the Alternative für Deutschland (Alternative for Germany; AfD) in Germany. There are reasons to doubt that these movements are more democratically inclined than mainstream parties—in fact, there is evidence to the contrary. Rather, they promote direct democracy because of its populist potential: they see it as a tool to implement their anti-immigration and anti-EU agendas. One of the outspoken supporters of Swiss-style direct democracy is the euroskeptic Daniel Hannan, a journalist and Conservative British Member of the European Parliament. When Swiss voters banned minarets in 2009, Hannan wrote a column with the title “Switzerland bans minarets: long live referendums, even when they go the wrong way.”

So Europe will be watching as Swiss voters will cast their ballots on November 30. There are two contentious issues to be voted on, both with consequences that will reach far beyond Switzerland’s borders. One of them is the popular initiative with the official title Rettet unser Schweizer Gold (Save Our Swiss Gold). Its declared intent is to secure the Swiss National Bank’s gold reserves with the specific stipulations that the National Bank needs to hold at least twenty percent of its assets in gold, that it does not have the right to sell gold reserves, and that the gold must be physically stored in Switzerland. Its populist appeal is evident in the language: the phrases “our Swiss gold” makes it sound like the Swiss have a birth right to the gold that has been chiseled out of Swiss Alpine granite–rather than mined by sweat labor in Botswana.

“Protecting the wealth of the people”: deceptive imagery to support the Gold Initiative.

Experts agree that the initiative does not make sense economically as the gold standard to support currencies has long been abandoned around the globe. But the impact would be felt globally as gold prices would rise substantially because the Swiss National Bank would be required to buy large quantities of gold. Furthermore, the Swiss Franc would rise in value to unprecedented heights which would do serious damage to the Swiss export industry. Already before the vote, the Euro briefly dropped to below the magic barrier of 1.2 Swiss Francs.

The second ballot issue is the so-called Ecopop initiative. It is a hard-core anti-immigration measure sugar-coated in language that feigns concern for the environment. It creates a horror scenario in which twelve Million people would live in Switzerland by 2050—the current resident population is eight million–which would cause the Swiss landscape to be paved over by concrete and destroy biodiversity. It seeks to limit net migration into Switzerland at .2 percent of the resident population or at currently about 16,000 individuals per year in order to keep the resident population stable and  to limit the environmental degradation associated with overpopulation. The increase in 2013 was about 100,000 so the impact on migration indeed would be serious. 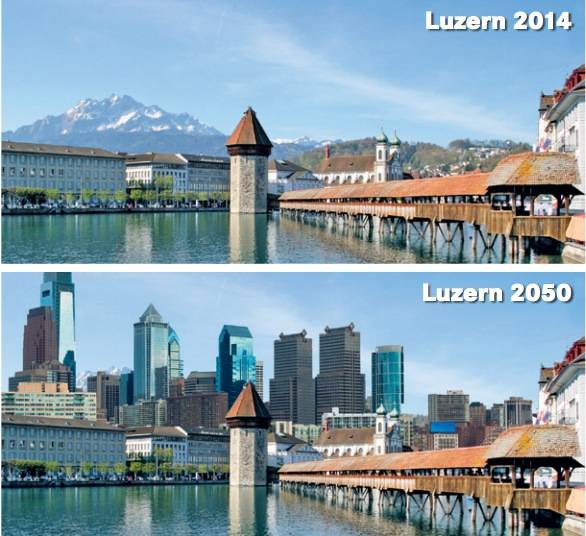 The consequences would be dire: it would stop immigration almost completely (which is the true intent of the initiative), deprive the Swiss economy of a much-needed labor force, irreversibly harm Swiss universities and research institutes, and force the cancellation of the extensive system of bilateral treaties with the EU which are critical for Switzerland–which is another undeclared objective of the initiative. As a result, Switzerland would lose direct access to EU markets and all the benefits the country enjoys from its current status of de-facto integration without the burdens of full membership. It also would embolden Euroskeptics in EU member states to demand similar measures in their countries.

Both ballot initiatives show the difficulties of addressing complex issues in a globalized and networked world by means of direct democracy. It is easy to convince ordinary voters to tell the National Bank to keep their gold in their piggy bank and to keep the Swiss landscapes from getting sullied by concrete. All that is needed are simplistic slogans using emotion-laden language that caters to  base fears in the population. But it is much harder to make a reasoned argument that demonstrates the extreme dangers these ballet issues will pose if passed. While the ramifications for Switzerland and Europe would be extremely serious, it is unclear if Swiss voters have the capacity to understand them. Of course, this could be decried as an elitist viewpoint–an argument often used by populists to defend their brand of direct democracy.

Direct democracy is a good indicator for popular sentiment and allows for a more nuanced expression of popular will than parliamentary elections and therefore is a very important political institution. But it also is prone to falling prey to populist seduction and deception. Many in Europe believe that some form of direct democracy could help address the perceived democratic deficit within the European Union. But recent Swiss votes raise doubt whether direct democracy really offers a viable alternative. The vote this coming Sunday will go a long way to answer that question. In a sense, the two ballot issues also will be referendum on the viability of Swiss direct democracy.