This study presents a theoretical method for planning and controlling agile bipedal locomotion based on robustly tracking a set of non-periodic keyframe states. 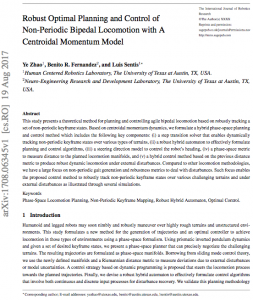 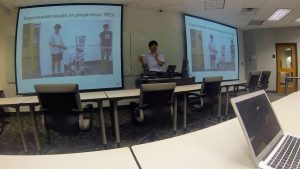 This video summarizes the deployment of applications on Valkyrie performed by Steven Jens Jorgensen from the U. of Texas at Austin and other researchers at NASA, IHMC, and U. Michigan. Given desired end-effector poses, a nonlinear optimization routine is used to solve the whole-body Inverse Kinematics (IK) of NASA’s Valkyrie robot while satisfying balance constraints. The joint position solutions are converted to the appropriate messages and are sent to IHMC’s controller interface, which interpolates between the robot’s initial (current) configuration to the desired configuration using third-order functions (polynomial for positions and a hermite curve for orientations). By specifying just the hand pose, a preliminary grasp planner uses the Whole-body IK solver to command Valkyrie’s hand to the desired pose. The Whole-body work is a collaboration between NASA and the Human-Centered Robotics Lab (HCRL) at the University of Texas at Austin. The grasp planner is from The Laboratory for Progress at the University of Michigan. This work was partially supported by a NASA Space Technology Research Fellowship (NSTRF) under the grant number NNX15AQ42H.