The Human-Centered Robotics Lab co-lead the Austin Villa DSPL team together with the Learning Agents Research Group, the Socially Intelligent Machines Lab, and the Personal Autonomous Robotics Lab. We took home the Third Prize being the only US team in the podium. 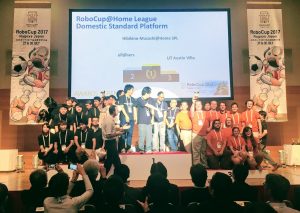 Prior rehearsals at the Human-Centered Robotics Lab are shown here:

The Human-Centered Robotics Lab joined forces with NASA Johnson Space Center to build the Valkyrie humanoid robot and competing at the DRC Trials in Miami. Our laboratory guided NASA to built six of Valkyrie’s high-performance linear series elastic actuators, develop whole-body controllers for upper-body manipulation, and develop embedded force controllers for the most series elastic actuators. A video of the process of building Valkyrie is shown below:

A video of our rehearsals is shown here: