For the Facility Thermal Management Project, Veliz construction spent the week preparing and finally pouring the concrete pad for the large liquid nitrogen tank which will feed VIRUS and eventually the HPF. 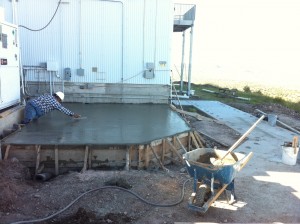 Weathers Electric began working on the Krabben hut exhaust fan wiring after ARC installed the fan early in the week. Veliz Construction also finished the cinder block wall around the new Mitsubishi compressors out in the remote thermal area.

One of the engineers from Austin came out this week to work on the tracker mount model using the laser tracker. They were able to run several long tests at night and will start the analysis of the data.

The work to clean and rejuvenate the hair seals continues. The newest
technique involves removing the seal clean it and then reinstall it such that the hairs are not curled the opposite direction as before. We are about one third complete with this effort.

Our new Opto-mechanical technician started today. She joins us from Austin and has already driven the JLG above the mirror and done an inspection of the coating tank in the clean room.

We received the work platforms for the VIRUS enclosures. These go on the inside of the enclosure but outside the truss. We found that the top set of platforms are to wide and will have to be modified.