For our large project which we call “Facility Thermal Management project” Veliz Construction began the mounting of the access stairway that serves the LN2 tank. ARC was onsite to continue the pipe insulation and insulation protection. Weathers Electric landed the Advantage Chiller power line into the HET main panel and replaced the 400 amp fuses in the the 112 KVA transformer disconnect panel with 350 amp fuses. Weathers Electric made the final connections for the new telescope Advantage Glycol chiller 3 phase power. This glycol chiller will help us cool the tracker motors and keep all of the electronics in the tracker at ambient temperature.

We continue to work on the VIRUS Safety system which will have alarms for dealing with the large liquid nitrogen tank behind the control room. It senses liquid nitrogen flow and oxygen levels around the facility. It is a fairly fast system that will take more than another week to complete its installation.

This week we began cleaning up the spectrograph room including moving around the large air tanks to make more room for the HRS insulation and the HPF enclosure, which will show up the 2nd week in November. Our goal is to hold the inside of the HRS enclosure to a very tight tollerance so we are current experimenting with RTD temperature sensors for the Spectrograph room to monitor how tightly we can control the temperature with the new air conditioning system recently installed.

This week we had some night time engineering work using the CAT (Celestron Alignment Telescope). This small telescope is mounted in some V-blocks near the center of the tracker where the future corrector will go. This small telescope will allow us to test guiding metrology and TCS software on the sky. This week we spent the time trying to align the telescope parallel to the rho axis, moving it to the center of the rho axis and then finding the offsets to align it along the central optical axis of the primary. Once done we were able to take a quick image of an open cluster, NGC 869, and confirm the plate scale and orientation and do some preliminary analysis of the newly installed TCS commands for rho, theta, phi, RA and DEC offsets. We have some debugging to do but this is a big step forward and will allow us to get valuable feedback before the corrector arrives in January. 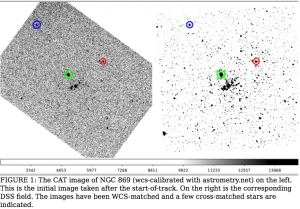