Much of the work in the last couple of weeks has focussed on the imminent delivery of the wide field corrector from Arizona later this month. We will have to test that the optical alignment of the corrector survived the trip down HWY 10 by placing it in a make shift clean tent put together in the loading bay of the the HET. This tent has two HEPA air conditioning units and a dry nitrogen purge line to keep the optics clean. Although it takes up most of the loading bay we still have just enough room to squeeze around it to allow operations to continue. See the picture below. 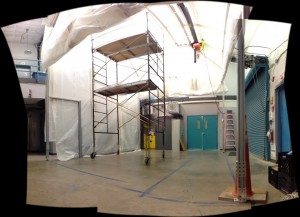 Because of the slight delay mentioned in the previous blog post we have been looking at sub-systems which might cause further delays during the commissioning effort. This week we spent several days trying to increase the reliability of the communications in the CCAS tower and to shorten most copper cables and replace them with fiber where possible in advance of lightening season.

The night operations and software development teams continue to make progress on the Telescope Control System. Despite several weeks of delays due to poor weather we can now run trajectories on the sky with the tip-tilt camera and Distance Measuring Interferometer running to make refinements to the mount model of the telescope. We have also exercised the system with a few score of trajectories finding small bugs in the code well in advance of the bulk of the commissioning which will take place when the wide field corrector is mounted on the telescope in June.

In the last few weeks we have had an opening for a telescope operator. If you know of someone with a STEM (Science, Technology, Engineering and Math) background who would be excited by the idea of running one of the largest telescopes in the world and living in the the lovely Davis Mountains be sure to have them apply:
Positions open at McDonald Obs.