VIRUS recently celebrated the installation of its 59th unit. Below is a representation of the sky area covered by the current IFUs: 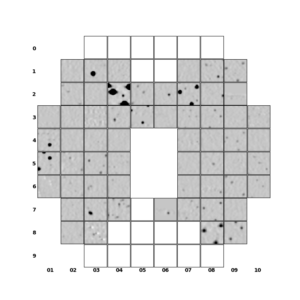 (Note: the VIRUS units (grey squares) do not actually touch each other, but are shown doubled in size to fill in the gaps between them, graphically.)

VIRUS units continue to multiply!  Shown below is a representation of 52 units on the sky: 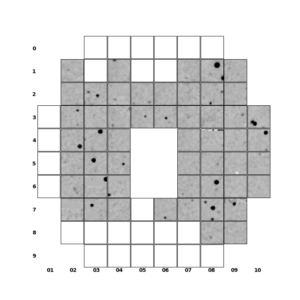 The grey squares with stars on them are looking at the sky (with more than 23,000 fiberoptic cables taking simultaneous spectra!), and the white squares are empty slots for future units.

The VIRUS units (grey squares) do not actually touch each other, but are shown doubled in size to fill in the gaps between them, graphically.

Much like it is for the blogger, it is a real milestone for VIRUS to hit 50.    In the case of VIRUS it is 50 units.   This was achieved over this past weekend after spending several months with just 47 units. 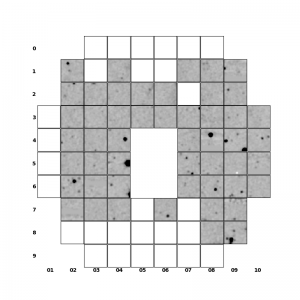 This means with every 6 minute exposure we take on the sky we get over 22,000 spectra!

On Monday we installed 2 more units bringing us to 52!!!   Well on our way toward HETDEX science!

This week at the HET we have taken the top end of the telescope so that we can rework the layout of the IFU fibers and add 11 new fibers.       That will leave just 17 IFU fibers to be installed.   Just to be clear this is not spectrographs being installed but just the IFU fibers that feed future spectrographs.   At the moment we have 41 spectrographs units installed and stable.     This means we are not more than half way towards our total goal of ~78 units.

It has been a while since I posted and I think one of our biggest pieces of new is that we are now regularly observing with HPF.    Not only is this instrument being used to observe host stars for planets but there are astronomers who are using it to observe planetary nebulae looking for new elements being born in the deaths of stars just slightly heavier than our sun.   This new instrument is easy to use, reliable and a great addition to the HET.

The other big news is that we now have 40 double barreled spectrographs installed within VIRUS.   That means that we are now more than half way to have VIRUS fully populated.

This week we had a number of break through moments. Perhaps the most prominent is that after weeks of rewiring and adding new shielding we may finally be at a point where the VIRUS array is fairly stable. We have 36 VIRUS units installed (each unit is 2 spectrographs) so a total of 72 spectrographs up for the last 5 days.

Another big breakthrough is in observing automation. We have a piece of software called OCD (Observatory Conditions Decision tool) which monitors the metrology (seeing, transmission and sky brightness) from the telescope and decides if HETDEX observations can be made. If allowed it will also take over the control of the TCS and VIRUS instrument and start observing HETDEX targets with only brief pauses to get confirmation from the telescope operator that we are on the right setup star. Using this new tool we were able to observe a full night of HETDEX targets with a minimum of overhead (even a few targets with just 3 minute setup times). This is faster than the fastest resident astronomer and telescope operator pair working together. Congratulations to the HETDEX software team who traveled out from Germany to help us get it all working efficiently.

This week we continued with HPF and Laser Frequency Comb (LFC) commissioning. We made a lot forward progress in getting spectra with the comb and had our official “first light”. Below are a few pictures that might help visualize some of what transpired.

A slide that shows the basement of the HET where the HPF and LFC live. 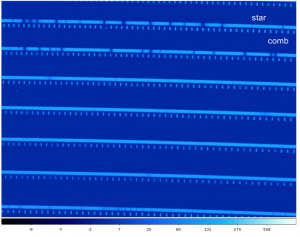 A part of the spectrum from HPF which shows the very regular picket fense of emission lines generated from the LFC just below a stellar spectrum. The spectra are stacked up in an echellogram. 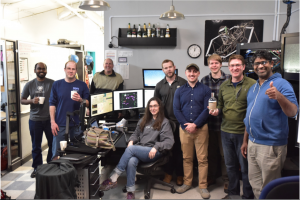 A very happy HPF team, NIST team and HET Night Operations team celebrate first spectrum on the sky. It took a large number of people to get this entire effort going but here are the lucky ones to see it live!

In the last week we have had a few updates for two of our instruments. For VIRUS we are up to 29 working spectrographs. We actually have several more units but some of the oldest and slightly mis-behaving units have been sent back to Austin for realignment and recommissioning. For HPF we are thrilled to announce that a NIST laser comb has been installed in the calibration room in the HET basement. This allows us to send a picket fence of spectral features through a separate fiber next to the science fibers. During the data reduction and analysis of the HPF spectra they can look at the position of these pickets and determine how the instrument might be subtly moving and correct for it. So far it seems like it is working great.

A brief advertisement before we get into this week’s news: One of our Resident Astronomers is retiring. If you are a PhD astronomer and interested in working on one of the largest optical telescopes in the world doing cutting edge research please consider applying: https://utdirect.utexas.edu/apps/hr/jobs/nlogon/171020014209

This week the big changes to the telescope have been the removal of the Prime Focus Instrument Platform (PFIP) work platform and the arrival of 3 more VIRUS units. The PFIP work platform, as the name suggests, allowed us to drop people off to work on the PFIP. We will still be able to work on the PFIP but now we have to do it from the JLG worker-lift. The work platform covered up a number of mirrors (about 10% of the light collecting area) as can be seen in the images below taken with our pupil viewing camera. 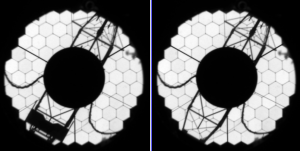 Two images of the HET pupil taken with our pupil viewing camera before (left) and after (right) the PFIP work platform was removed.

With the delivery of 3 more VIRUS units we now have 28 working VIRUS units or 56 spectrographs or more than 12,000 fibers on the sky!

The exciting news this week has been the arrival of the Habitable Planet Finder (HPF). This is the first of our new high resolution instruments and an instrument well suited to working in bright moon conditions. The HPF was designed and built by our Penn State partners and arrived on the 16th. 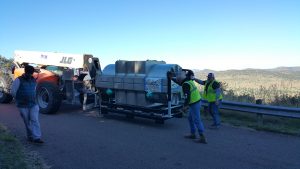 was able to open their instrument and after a very through inspection proudly announced that they have just as many pieces of glass as they did in the assembly lab at Penn State (an optics joke). After a few final checks and the inclusion of their single moving part inside of the spectrograph they sealed up the vacuum chamber which, if things continue to go very well, may remain sealed for several years to come. The process of pumping the vacuum out of the large chamber took the rest of the weekend.

In the coming days and weeks the HPF team will monitor its stability, install the laser metrology system and get the systems ready for on-sky commissioning.

Quite an exhausting and exciting week at the HET!