In 1907, Eugen Sandow, a strength performer 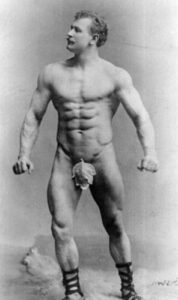 famed for his muscularity and lean physique, opened his most ambitious business adventure centered on the eradication of disease without “harmful” medicines. Sandow’s “Curative Institute” was located in the heart of London, employed several registered physicians to act as advisers, and enjoyed the patronage of thousands. Claiming to heal a variety of diseases through exercise and diet alone, Sandow’s Curative Institute has not previously enjoyed a sustained study.

Surveying Sandow’s Institute, the talk demonstrates the manner in which Sandow leveraged his celebrity status and a growing British distrust of traditional medicine to run a successful alternative medical clinic. In doing so, the talk discusses the General Medical Council’s 1912 trials of several registered physicians employed by Sandow’s Institute. Charged with infamous conduct, the three doctors were struck from the medical register thereby discouraging any other physicians from officially associating with Sandow in the future. Exploring Sandow’s initial successes and the trial, the talk sheds light on a previously unstudied aspect of alternative and traditional medicine in Great Britain.

Conor Heffernan is Assistant Professor in Physical Culture and Sport Studies at the University of Texas at Austin. He joined the University in 2019 following his doctoral research on physical culture in Ireland from 1893–1939. In the past he has published on sport and identity in post- colonial Africa, the transnational history of Indian club swinging in Victorian England, physical culture in Ireland, and the possibilities offered by animal history to sporting historians.