There’s little question that China’s coal dependency in economic growth has contributed to its air pollution and significantly impacted the health of its citizens. China relied on coal for 70 % of its electricity generation in 2009, and China consumes more coal than the rest of the world combined.  Efforts are underway to reduce emission and air pollution levels, but the shift away from coal will continue to challenge Chinese economic development.

The impact of China’s use of coal is increasingly evident in the level of air pollution that its citizens suffer each day. Many Americans remember the significant discussion of Chinese attempts to reduce air pollution during the 2008 Beijing Olympics. The problem seems to have worsened. A recent report estimates that coal-related pollution has reduced the life expectancy (on the average) for as many as 500 million people by more than 5 years. This level of air pollution poses a threat to internal security and threatens sustained economic growth.

One solution that the leadership has adopted is the production of synthetic natural gas (SNG) from coal. While the technology for this process originated in the United States during the energy crises of the 1970s, the technology never achieved wide scale adoption as a natural gas substitute. 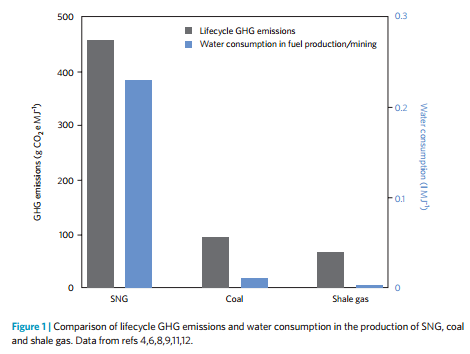 Adoption of this technology as a natural gas substitute in China, however, could yield even larger climate related problems. According to researchers at Duke University, the process could exacerbate emission levels and only add to global warming in the long-run. The use of synthetic natural gas could increase emissions from 36-82% from just burning coal. Adoption of this technology as a substitute for coal generated power would amplify the environmental impact of China’s economic growth.

In the United States, however, the shale gas boom continues to allow cheaper (and cleaner) natural gas to replace traditional coal-fired power plants. Coal’s share of US electricity production fell from 50% in 2005 to only 37% in 2012. This combined with the economic downturn in 2008 has allowed the US the potential to remain on track for meeting its emission reduction commitments.

Could China emulate this decline in coal reliance and reduction in emissions? A seemingly simple solution would entail US export of  liquified natural gas to China to allow the increased adoption of natural gas in electricity production. Exports of US LNG could both allow US exporters to take advantage of significant world price differentials and impact the geopolitical balance in Europe and Asia. According to the Federal Energy Regulatory Committee (FERC), there are 13 proposed LNG export terminals with many more potential sites for LNG export. The Obama has already allowed the approval of four NGL export terminals this year, and the Department of Energy seems poised to approve ten more.

The Realities of LNG Exports

US industrial interests advocate restricting liquified natural gas exports (LNG) as they could threaten the US competitive advantage of low domestic gas prices, which averaged $2.75 / mmBTU in 2012.  According to the American Petroleum Institute, a trade organization, the impact of sustained LNG exports would only increase prices from $0.32 to $1.02 mmBTU on average from 2016-2035.  This suggests that the slight increase in price in the domestic market could allow significant near-term emissions reductions.

LNG exports could encourage the shift from coal generated to natural gas generated electricity worldwide. This shift would assuredly affect US coal exports and further shift investment from coal to natural gas extraction. LNG exports are not, however, a panacea for China’s coal dependency.  The process of liquefying natural gas is costly and typically adds between $5 and $8 per mmBTU. These costs narrow the competitiveness of US LNG exports in Chinese energy markets.

Practical and realistic solutions to China’s coal dependence must consist of a combination of policy options. An option that could have a larger more long-term impact on Chinese coal usage in electricity generation is to encourage the Chinese development of its own shale gas fields. This could take the form of increased information and technology exchange for hydraulic fracturing (fracking) technology and other unconventional extraction methods that have spurred the US shale gas production boom.

While the concept of forced technology sharing and transfer from US oil and gas corporations is not necessarily feasible, the Obama administration could give incentives to encourage joint partnerships between US and Chinese oil and gas companies to explore and develop Chinese shale gas fields.

This shift towards the adoption of Chinese domestic natural gas in electricity production would serve to reduce emissions in the medium-term and allow for the exploration of other energy alternatives for long-term emissions reductions. More importantly, US policy encouraging technology sharing would serve to bolster our credibility and commitment to helping developing nations deal with reducing their emissions. At this point many options seem more appealing than a synthetic gas revolution.

Spencer Jones is a second year student at the LBJ School of Public Affairs. His career in business process consulting and risk management led him to pursue a career in international economic policy and particularly the intersection of national security and economics.