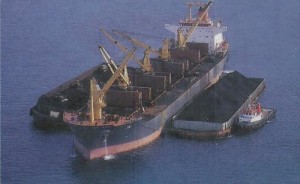 Over the past two decades, Indonesia has seen significant growth in coal production, exports, and domestic sales, driven primarily by an increase in foreign investment in the coal sector. Currently exports account for up to 80% of production, which should increase by 10% per annum over the next 5 years. With some of the world’s largest coal reserves, Indonesia’s production was 383 million tons in 2012 (up from 194 million tons in 2006) and is expected to be around 400 million tons by the end of 2013 according to the Ministry of Energy and Mineral Resources. 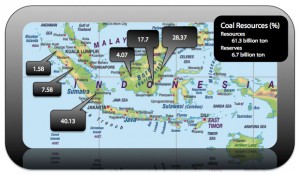 Increased domestic production, driven largely by skyrocketing demand for cheap low-quality coal from China, India, Japan, and Korea, have been the impetus for Indonesia’s rising exports. In 2005, the country overtook Australia as the world’s largest thermal coal exporter. Coal accounts for 80% of state mining revenue and, as prices are expected to rise over the next five years due to rising demand, Indonesian companies are more incentivized than ever to secure reserves of the commodity now. 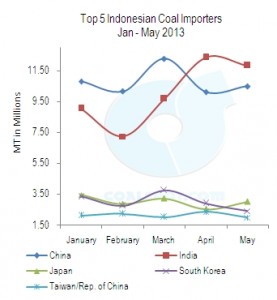 Following the implementation of the 2009 Mining Law, a number of mine concession contracts were given to smaller producers. The national industry is currently comprised of a few large producers – including Bumi Resources and Thiess – and many small miners. The national government has the ability to significantly affect the coal mining industry, setting reserve quotas for producers to set aside for domestic consumption. For months the government has toyed with the idea of implementing coal export taxes. Last month, it announced a possible plan of restricting the number of ports allowed to export coal while also taxing exports (or increasing royalties) next year.

Post-2009 miners currently pay 3-7% (depending on the caloric content of their coal) of their net sales to the government in the form of royalties. Earlier this year, the government planned to raise this to 13.5%; this is the current amount that all pre-2009 licensed miners pay regardless of coal quality. On the other hand, the government is considering a strict weight-based export tax on all producers and leaving royalties unchanged. Currently, the country levies a 20% export tax on raw material ores and uses this as a potential model for coal.

The simple answer to the question is that Indonesia wants to increase domestic coal consumption. As a country attempting to shift to more fossil-based fuel for energy consumption, it is looking to avoid overexploitation in the industry. Coal accounts for 24% of the domestic energy mix and the government intends to increase this amount to 30% by 2025 according to EDSM. Are there other motivations? 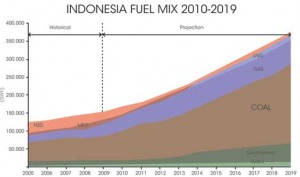 The potential export tax will obviously burden small producers who already suffer from weak prices. Many will have to shut down operations and the larger producers will be comparatively better off. Government officials defend the plan claiming it will result in greater energy security, less overexploitation, and less environmental degradation; the claim of environmental degradation is questionable as they look to increase coal consumption by 20% over the next decade. Is the government playing favorites with large producers, attempting to consolidate the industry and concentrate profits in the hands of a few?

Another possible motivation could stem from expectations of future prices. Seeing as global demand will exceed global production in the next few years, prices will rise but they have not risen yet. The Indonesian government could very well see this as an opportunity to temporarily stifle exports until the global price significantly rises, resulting in a vast increase in non-tax revenue. If the country holds on to more supply now and focuses on domestic consumption, maybe it can bide its time for two or three years and sell off its built up reserves at a higher premium.

Be the motivation energy security, corruption, or sly economic planning, the effect of this plan could be felt throughout the global energy market. China and India will have to focus on other sources if Indonesian exports significantly decrease. Domestic competition within Indonesia will become fierce and could possible alter the dynamic of the industry significantly. More research is needed on the potential effects of this policy on aggregate GHG emissions. Will China find a way to emit just as much without Indonesian coal? Will increased coal burning by Indonesia offset the benefits of this policy? Will local coal miners stand for this?