A Closer Look at the Global Nuclear Industry

On the other side of the spectrum is Austin Chronicle journalist Robert Bryce. In his 2010 book, Power Hungry, Bryce championed his own energy plan called “Natural Gas to Nuclear” or N2N. Bryce argues that the world will increasingly reply upon natural gas and nuclear power to meet the energy demands of the 21st century, which in his opinion, is the answer to global warming.

Luckily for us, the nuclear industry is very carefully regulated by the International Atomic Energy Agency, and thus, the data for global nuclear power generation is widely and easily available. With just a little effort, we can sidestep these nuclear hedgehogs and dive into the numbers themselves, which tell a very interesting story.  All of the numbers for this analysis come from the IAEA PRIS database.

As of May 6, 2014, there were 435 operating nuclear power reactors in operation around the world, 100 of which were located in the USA. The US has long been a leader in nuclear power generation but now risks losing that lead to France and China. Worldwide, there are over 60 reactors under construction in 13 countries, most of them located in China, Russia, India, and the US.

A long view of the global nuclear industry shows a clear uptick in the number of new reactors under construction compared to the industry’s decline in the 80s and 90s.

This graph shows the status of reactors that began their construction in a given year. The IAEA defines “construction start date” as the date when the concrete base mat for the reactor has been completed. Thus, these dates represent reactors that have successfully completed the planning phase. The green bars to the left indicate that all of the permanently shut down reactors in the world were constructed before 1980. Furthermore, the stagnation in new construction after Chernobyl in 1986 is quite clear in this graph. However, the most interesting trend is apparent “nuclear renaissance” before the Fukushima disaster in 2011. This trend in new construction retreated briefly, but appeared to be on the rise immediately following the disaster, which is surprising. The decline in construction start dates after 2014 is misleading because they represent “projected” start dates in the PRIS database, but not all of the proposed reactors around the world today have officially announced their construction start dates.

Another way to look at these numbers is by construction starts, grid connections, and shutdowns by year.

The years 1990, 2011, and 2013 stand out for their significant number of shutdowns. If the late 1960s and 1970s represent the greatest expansion of the global nuclear industry, then the 1980s and 1990s represent what Amory Lovins calls its “decades-long collapse”. But when we look more closely at these significant shutdown years, it becomes apparent that these retreats are driven by a handful of countries. When we further consider the vast improvements in capacity since the very first reactors in the US and UK in the 1950s, three countries stand out as driving worldwide nuclear retirements: the US, Japan, and Germany. 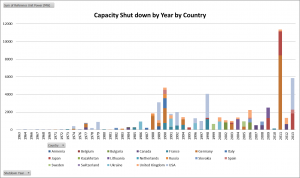 Germany’s reaction to Fukushima shocked the world when Chancellor Merkel announced in 2011 that Germany planned to shut down their entire nuclear fleet by 2022.

Japan understandably made a similar announcement in 2012 responding to the public’s incredibly fierce anti-nuclear sentiments. Indeed, it appeared that nuclear power was on its way out. However, in a stunning policy reversal, Shinzo Abe announced in April 2014 that Japan’s future energy plan would include nuclear power and that existing plants which passed safety inspections would be allowed to return to normal operation. As it turns out, since 2011 only 6 reactors in Japan have been permanently shut down, all of which were located at Fukushima Daiichi.

In the US, reactor shutdowns have far less to do with issues of public safety and everything to do with cheap shale gas. Multiple utilities in the US are making plans to retire their unprofitable nuclear reactors in favor of natural gas combined cycle power plants.

At this point, I would not wager on a nuclear renaissance just yet. But with the increasing number of reactors under construction in China (29 as of this morning) and the greying of the US nuclear industry, I would keep an eye on China’s nuclear industry. Right now, the PRC needs immediate solutions to its urban-smog problem caused primarily by its coal-fired power plants. As it stands today, nuclear power may be the only technology able to provide enough baseload power to curb the country’s overwhelming reliance on coal for electricity generation. For these reasons, I expect China to lead the world in installed nuclear capacity by 2050.