The United States’ transport and energy production sectors are the nation’s key sources of emissions.  Together they produce well over one half of the country’s greenhouse gases. As a result, the majority of climate policies that the U.S. currently has in place or is pursuing target these two areas.  And, with CAFE standards already well-established and quite effective, a number of the new proposed regulations turn their focus on electricity production.

Because over a third of carbon dioxide emissions in the United States stem from the electric power industry, this sector has been targeted as one with significant greenhouse gas mitigation potential—especially in light of new and cleaner power generation technologies.   The majority of emissions from this area are released through the burning of coal.  Under President Obama’s Climate Action Plan, the EPA is mandated to develop a solution for setting power plant greenhouse gas emission standards in the United States.  The EPA, in turn, has turned to sections 111 (b) and 111 (d) of the Clean Air Act (established in 1970 under President Nixon) as the framework and justification for establishing hard caps on new and existing power plant emissions.  While the use of this law is somewhat clunky, given that it was originally developed to address acute air pollutants, it provides a surprisingly flexible basis for states to regulate their plants as they best see fit.

Section 111 (b) of the Clean Air Act was used as the basis for an EPA proposal to regulate emissions from new gas- and coal-fired power plants.  On September 20, 2013, the EPA announced this proposal and it currently remains open for comment in the federal registry, although it will be closing on May 9, 2014.  The proposal states that newly constructed power plants must adhere to the following standards:

Under these regulations, coal plants would need to install Carbon Capture and Sequestration technology, which has already been explained in the Energy Production Sector report.  The timeline for installation, given that such equipment is near-prohibitively expensive, may follow one of two paths.  New coal plants may be constructed with CCS installed immediately, so that they meet the 1,100 lb CO2/MWh goal over their first 12-month average, and then maintain it moving forward.  Alternatively, new coal plant owners may install CCS anytime within seven years after startup, but must then achieve between 1,000 and 1,050 lb CO2/MWh for that initial seven-year average.

Section 111 (d) of the Clean Air Act will be used as the basis for the upcoming EPA proposal to regulate emissions from existing power plants.  Proposed standards and methods of regulation for existing power plants must be released by June 1, 2015.  States then have until June 30, 2016 to develop their own unique plans for meeting the new federal emissions caps.  It is anticipated that setting such standards will not actually have too detrimental an impact on the power generation industry, as natural gas has become quite abundant in the United States and coal has become uneconomical in light of this.  Ergo, anticipated and current plans to build coal-fired power plants are quite low, regardless. 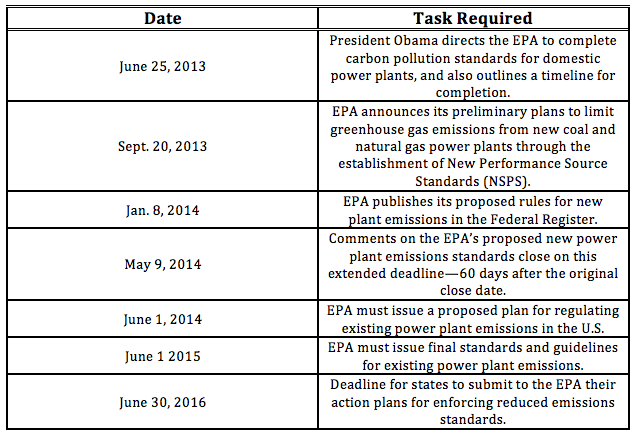 While the Clean Air Act allows the federal government to take immediate action toward regulating power plant emissions, it was not designed for this purpose.  Legislation that is targeted specifically toward carbon dioxide and other greenhouse gases (like methane, which can be released through leakages) needs to be written and passed.  It must be flexible and attentive to states’ specific needs, but also set a firm bar on emissions that directs the nation toward the IEA’s low-emissions scenario.  Additionally, this cap must be easy to downscale, in light of the possibility that new studies may uncover more threatening information about the dangers of greenhouse gas release.  Though perhaps a long-term solution like this is a ways down the path for the United States, it still remains a cornerstone necessity for our electricity production sector and our efforts to mitigate greenhouse gas emissions.
Tagged with: Clean Air Act, Existing Power Plant Regulation, New Power Plant Regulation