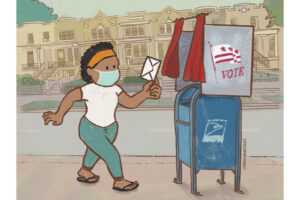 “The Nation’s Capital,” “Chocolate City,” “The District,” and “The Douglass Commonwealth” are just a handful of monikers people use when referring to the seat of government in America. We chose to highlight voting rights efforts in Washington, D.C. partly because of the imagery it presents of our democracy, but also to serve as a Northern and urban counter to the Southern and rural nature of Texas. As seen in our work on Texas, we decided to look at structures that can inhibit or prohibit individuals from participating in voting — from locations for and numbers of polling stations to legislation directly aimed at increasing enfranchisement.

The infographics below are presented to show how equitable voting practices can lead to a more robust voting populace. We focused on polling locations, in regard to their placement in different communities, and voter registration trends to see how simple measures can have a significant impact.

Note: Some of our research used older data as  the 2020 Census is yet to be completed.

The maps below show that polling locations were equitably placed all over “The District” with population density and racial demographic components in mind. A poling location (total of 144) was present in each of the 144 precincts throughout the District of Columbia for the 2020 Primary Election. 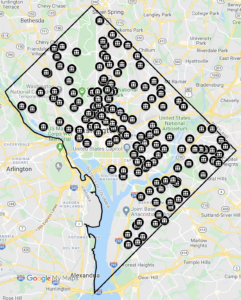 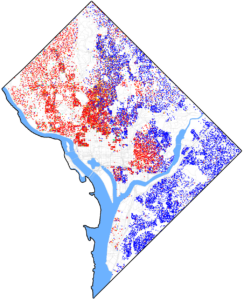 The following graphs (one for Primary Elections and one for General Elections) show how voter registration has been trending in Washington, D.C. since 1992. 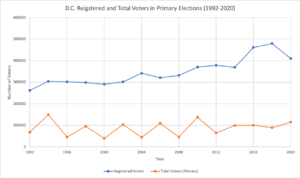 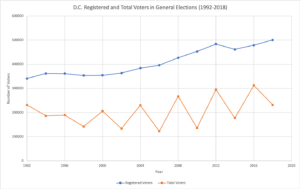 While the number of citizens who come out to vote fluctuates over the years, there is a consistently increasing number of total registered individuals in the District of Columbia. The D.C. government has made progress in advancing voter enfranchisement through their legislative efforts. Although D.C. does not recognize Election Day as a local holiday (due in part to the nature of its statehood/federal ties), some of the actions taken include Automatic Voter Registration (passed in December 2016 and implemented in 2018), online registration (implemented in October 2014), same day registration (implemented in 2010), and vote by mail (recently enacted during the 2020 primaries). The implementation of these voting rights efforts align with spikes in voter registration numbers as well as the continued rise of registration totals.