Research indicates that polling wait times are a significant barrier to voting, and nationwide, up to 520,000 people did not vote in 2016 due to long lines (1). Based on this, we wanted to understand how wait times might be impacting people of color in Travis County. Our findings inform the recommendations we have for policy makers in Texas and Travis County as we approach the 2020 Presidential Election. 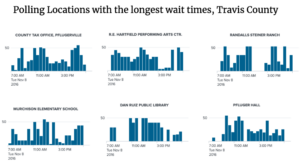 At the polling location with the longest wait time, the County Tax office in Pflugerville, voters routinely waited upwards of 50+ minutes to vote throughout election day. 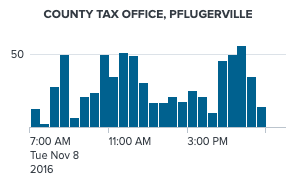 These locations stood in stark contrast to many areas of Travis County where there were never wait times longer than five minutes, even during the peak voting hours.

We were interested in determining where in the city these polling locations were located spatially, to determine which voters might be being impacted. To do that, we geocoded polling locations in Travis County and mapped out the 22 locations with the longest wait times, and overlaid that with demographic data (obtained from the census) to understand what areas of the city (and by extension, what citizens) were being impacted by long wait times. 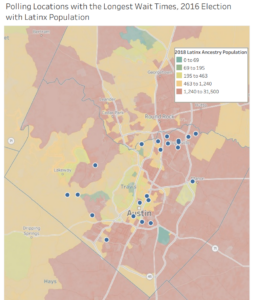 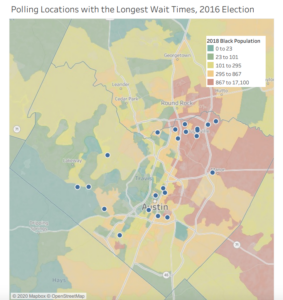 Based on these maps, it is clear that 16 of the 22 polling places with the longest wait times are located in predominately Black and Latinx areas. The trend is particularly clear in Pflugerville, an area whose black population has grown significantly in recent years as people of color have been pushed out of central Travis County, specifically East Austin, by gentrification and rising property taxes.

Given what we know about the impact of long wait times on the ability of people to vote, the fact that over half of the polling locations in Travis County with longest wait times are in areas of the city with high numbers of voters of color has significant social justice implications.

Many well known barriers exist in Texas which discourage voters of color from exercising their constitutional right to vote, including voter ID laws, a lack of online voter registration, and polling place closures. Based on our research, we believe that inadequate poll workers and polling booths in precincts with high numbers of voters of color are another area of significant concern. Unlike many other structural barriers, the distribution and staffing of polling locations is something Travis County has the authority to make an impact over. This is also important given that the Covid-19 pandemic has the potential to exacerbate long lines at polling places, as safety procedures and a potential shortage of poll workers make voting more difficult.

Travis County needs to expand the number of voting booths and poll workers at the polling locations we’ve identified with excessive wait times, or alternately provide a greater number of polling locations in those immediate areas. This is lessen the burden on voters of color so that they are able to easily exercise their right to vote.