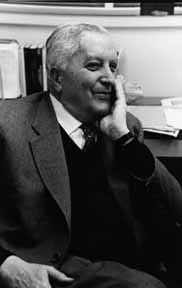 Ilya Prigogine was awarded the Nobel Prize in chemistry in 1977 for his contributions to nonequilibrium thermodynamics, particularly the theory of dissipative structures. He was born in Moscow, Russia on January 25, 1917. He obtained both his undergraduate and graduate education in chemistry at the Universite Libre de Bruxelles. He was Regental Professor and Ashbel Smith Professor of Physics and Chemical Engineering at the University of Texas at Austin. In 1967, he founded the Center for Statistical Mechanics, later renamed the Ilya Prigogine Center for Studies in Statistical Mechanics and Complex Systems. Since 1959, he was the director of the International Solvay Institutes in Brussels, Belgium. In 1989, Prigogine was awarded the title of Viscount by the King of Belgium. He was a member of 64 national and professional organizations, among which are the National Academy of Sciences and the American Academy of Arts and Sciences. The most recent of Prigogine’s many international activities were Special Advisor to the European Community in Brussels, Belgium and Honorary Member of the World Commission of Culture and Development of UNESCO, chaired by Perez de Cuellar.

The main theme of the scientific work of Ilya Prigogine was a better understanding of the role of time in the physical sciences and in biology. He contributed significantly to the understanding of irreversible processes, particularly in systems far from equilibrium. The results of his work on dissipative structures have stimulated many scientists throughout the world and may have profound consequences for our understanding of biological systems.

Ilya Prigogine Institutes and Centers of Study in the World