Two groups of RFSA members went on the same Panama tour one day apart, 14 leaving on Feb 11 and 10 on Feb 12. As we were driven from the airport into Panama City, we were surprised to see many tall skyscrapers lining the horizon, one shorter one in a spiral shape. They have been built since 2000 and comprise Panama City #3. If you think driving is scary in Austin, lanes were not often marked so cars drove at their own risk, wove in and out of crowded lines and entered traffic when small spaces presented themselves. We were glad we were in a large bus! 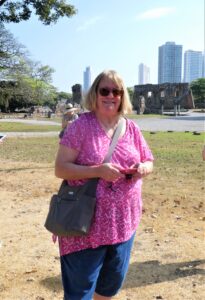 Panama Viejo, Robin Fradenburgh with ruins behind her and modern Panama City in the distance – courtesy of Janet Hicks

We visited the ruins of Panama Viejo (Old Panama), founded by the Spanish in 1519. It burned down, and was rebuilt about 15 minutes away, Panama City #2. Panama City #3 could be seen across the bay. We went to the Miraflores Locks on the Pacific side where there was a museum about the locks, but we spent most of our time at the observation deck, patiently watching a ship go through. On the way back to the hotel, we drove through the City of Knowledge. When companies want to come into Panama, they are asked what new knowledge they will bring with them, so new universities and schools have been established. We were treated to a show that evening by a Caribbean dance troupe. 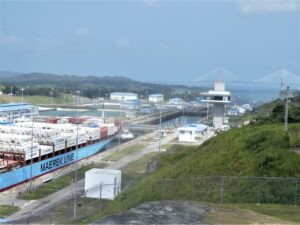 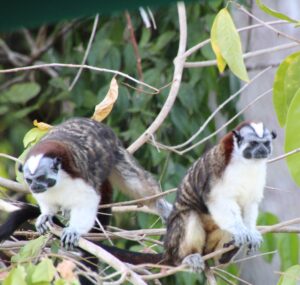 The next day we drove north to Colon, going passed the Free Trade Zone to the Agua Clara Lock where we saw the locks on the Caribbean Sea/Atlantic side. Very large cargo ships were going through and we were told somewhat how the pricing structure was done. Large cargo ships with a full load may pay up to $1,000,000 to go through the locks, but it beats going around South America. Payment had to be made in advance and it may take up to 48 hours for their turn to get through. Several ships were always waiting far out in the water for their turn. In the afternoon we took two 22 seat passenger boats on Gatun Lake, going by small islands and saw capuchin, tamarin and howler monkeys. After dinner we saw an old filmstrip by David McCullough of previous attempts to build a canal. In the 1600 & 1700s it was desired, but the land was very inhospitable. The French in 1881-89 tried building the canal at great human expense, with thousands dying of typhoid, yellow fever and malaria, as well as in landslides. In 1904 the US took over the project, and the director said first they had to take care of the mosquito problem, which was done over a period of time, saving many lives. President Teddy Roosevelt was filmed when he visited the site. Finally, the monumental task and engineering marvel of the canal was opened in 1913.

In the very early morning, as the second group left our Gamboa Rainforest Reserve hotel grounds, we saw a capybara family group with three young ones. We drove to the Pacific locks and boarded a two deck sightseeing boat to go through the Miraflores and Pedro Miguel Locks. We were told our boat paid $4,100 to go through the locks. There was a lot of waiting, but we did see how it worked. Only Panama Canal pilots are allowed to guide the ships and boats through the canal, so they are brought by an official boat to board the ships to take them through. If we weren’t napping that afternoon, we were enjoying the beautiful outdoor Gamboa hotel pool, or maybe both. 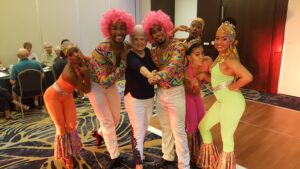 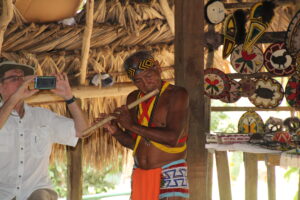 Embera flute player under roof with hand woven baskets behind him, Ted Aanstoos of group 1 in pic – courtesy of Ella Quinlan

We took small boats on the Chagres River to go to the Embera indigenous tribe village. We were greeted by a lightly but colorfully clad couple who helped tie the boats and help us off, then we went up a hill, welcomed by music, a wooden flute, gourd shakers, handmade drums and a stick beating on an empty turtle shell. We sat under a large square structure with a long grass or palm frond roof and open sides while learning about their culture. Willing souls got to dance with the Embera women and children to the music, then we had a chance to see and purchase crafts Embera families had made. Beautiful carvings from cocobolo wood, tightly woven baskets of palm fiber with designs, small carvings made from tagua nuts, jewelry and more were on display. Earnings were used to purchase special cloth for the women’s skirts and beads to make the women’s tops and men’s bottoms. We could even get a temporary 10 day tattoo. There were a few cuipo trees, very straight and very tall with no branches or leaves except at the top. This is where their
national bird, the Harpy Eagle makes its nest. 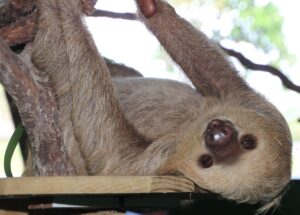 At the Gamboa Sloth Sanctuary & Wildlife Rescue Center it was fun to see sloths which were being taken care of before being released to the wild again. Some actually moved! We also went through a butterfly enclosure and into an orchid garden. Lastly was a very large habitat tank with small colorful poisonous frogs.

The next day was free time at our Westin Hotel by the Pacific Ocean with lovely pools in the back and our own beach. Different iguanas would roam and stop to look at us. When the tide was out, we could stroll the beach for shells. Being in the ocean water was discouraged by the jellyfish and rays. 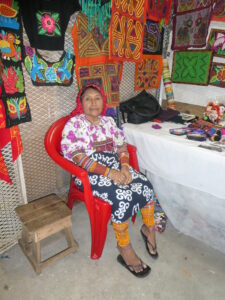 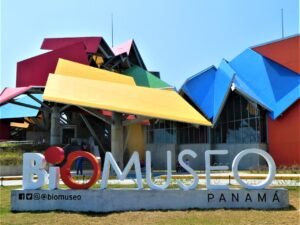 Going to the Kuna Indian Market was a treat. The Kuna women tend to be around 4’ tall and wear banded colored string wrappings on their arms and legs and very colorful clothing. They are known for their hand sewn multi-layered cloth designs, called molas. Many small booths lined with handmade and other wares had much to choose from. From there,
we went to our last hotel in Panama City. The second group went to the Bio Diversity Museum. The first group had gone there at the beginning of their trip. It explained how many thousands of years ago when the Panama land bridge formed, it changed the ocean currents and affected weather all over the world. It also allowed animals to travel from South America to North America and visa versa. 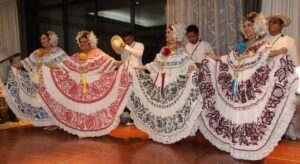 Our last evening, a professional Panamanian dance troupe performed their native dances for us, the men dressed in traditional men’s clothing (including Panama hats) and women in beautiful hand embroidered Pollera dresses and petticoats, each one unique. There are rules about how the dresses are made and the 6-12 necklaces that can be worn with them, as well as the intricate multi hairpieces they wear. The embroidered petticoats alone cost around $1,000 and the dresses much more.

We all enjoyed our taste of Panama, learning about the locks and their multicultural country. 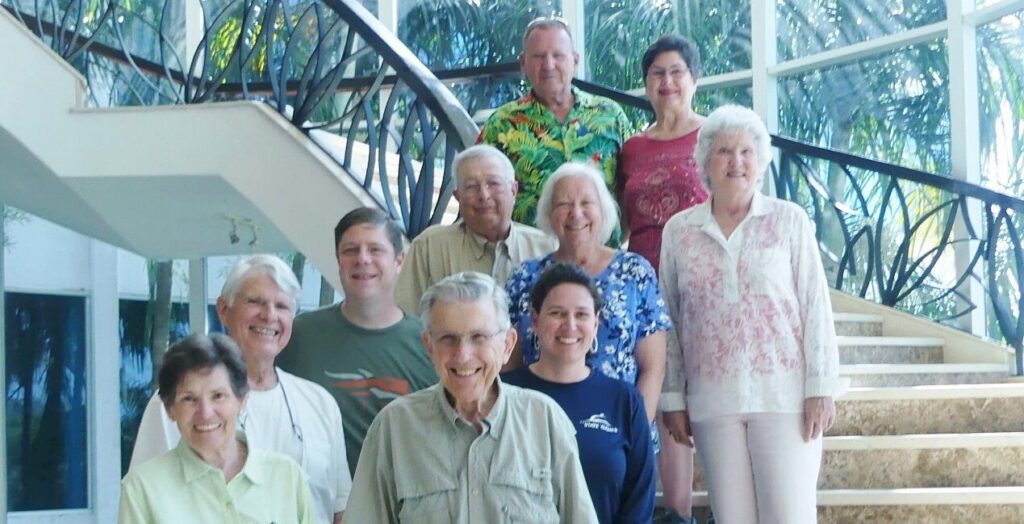