During the last week of April, the Program for Aegean Scripts and Prehistory (PASP) hosted its first ever “Late Bronze Age Clay Time! Study Break” in the Classics Lounge in Waggener Hall at the University of Texas at Austin. Approximately twenty undergraduate and graduate students, along with some staff and their children, produced a veritable archive of Late Bronze Age (LBA) tablets. We provided attendees with the clay (local-fire “Longhorn Red” clay from Armadillo Clay), three types of styluses, and one of three different instruction packets. The first type of instruction packet pertained to Mycenaean Greek and Linear B, the second to Ugaritic, and the third to Cypro-Minoan. Each packet included instructions for how to make one of three tablet types, a signary in the corresponding script, and a model text to write in the corresponding language. Each of the texts, once combined, tells the story of the Late Bronze Age copper trade as mediated by Cypriot traders.

The idea for “Clay Time!” arose at the suggestion of our archivist Garrett Bruner. I was in the midst of telling him about my recent experiments in making Cypro-Minoan (CM) clay boules (or balls) at home. Driven by an interest in the distinctiveness of the CM “tear drop” ductus, 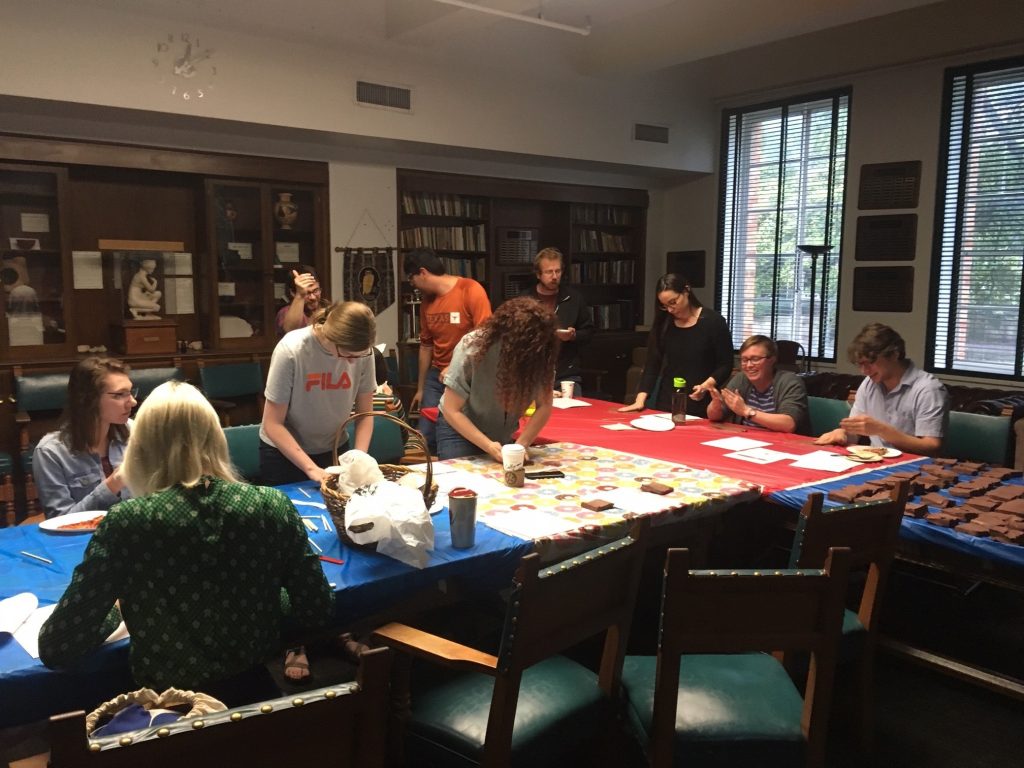 or method of inscription, which features on some CM tablets and balls, I had been experimenting with whether the tear-drop shape comes from the stylus being impressed or drawn into the clay. The former method, of impression, recalls the technique used for making cuneiform wedges, while the latter method of drawing was used to inscribe the signs of the Linear scripts. Registering my enthusiasm for clay time, Garrett figured it would be easy enough to spread. For my part, I figured it would be a nice way to spread the LBA gospel. I may have also been keen to test a hypothesis or two concerning stylus choice and impression vs. drawing styles.

The only thing we did not tell them was which stylus matched which script. The three stylus types on offer were bladed styluses, after the Linear B model, pointed, round-tips for Cypro-Minoan, and rectangular tipped styluses for Ugaritic. The first two stylus types were shaped from wooden dowels using an exacto knife and a pencil sharpener, respectively, and the third, rectangular styluses were unworked chop-sticks. As for the tablets, there were three shapes on offer: for Linear B, leaf shaped tablets, for

Ugaritic, cushion-shaped tablets, and for Cypro-Minoan, convex-shaped tablets (modeled CM ## 208). Instructions for how to shape the tablets were drawn from the work of Thomas Palaima in the case of Linear B, and Jonathan Taylor in the case of the Ugaritic tablets. As both authors have noted, very little is written on the subject. In the case of the Cypro-Minoan convex tablet, no instructions were supplied as none exist (I am mean, I know). In addition to the written instructions, we assembled a powerhouse of script and tablet consultants: Kevin Pluta and Joann Gulizio for the Linear scripts and Øyvind Bjøru and Aren Wilson-Wright for Ugaritic. I was the lone CM expert.

Overall, the day was a success. No one threw their tablets down in disgust or frustration, though one or two people were serial re-pulpers. The places where people needed the most help were in the creation of the Linear B tablet (there was a tendency to make very thin tablets), and in deciding which styluses to use for the Ugaritic and CM scripts. The overwhelming tendency in both cases was for people to try and use the blade styluses first. In the case of Ugaritic this appears to be due to the triangular shape of the blade. In the case of Cypro-Minoan, I believe this was because of the ambiguity regarding whether the script is drawn or impressed. One of the most interesting outcomes to me was that two different people who made Cypro-Minoan tablets, once they hit upon the right stylus-type, experimented with both drawing and impressing signs. They ultimately settled on a combination of the two styles, which is where I myself had landed when inscribing my own clay balls.

All-in-all, the day was educational and fun, both for the participants and for the observer’s alike. A great thank you to Garrett for coming up with such a fun idea!

Updated on May 15, 2019 by Garrett R. Bruner. garrettbruner@utexas.edu