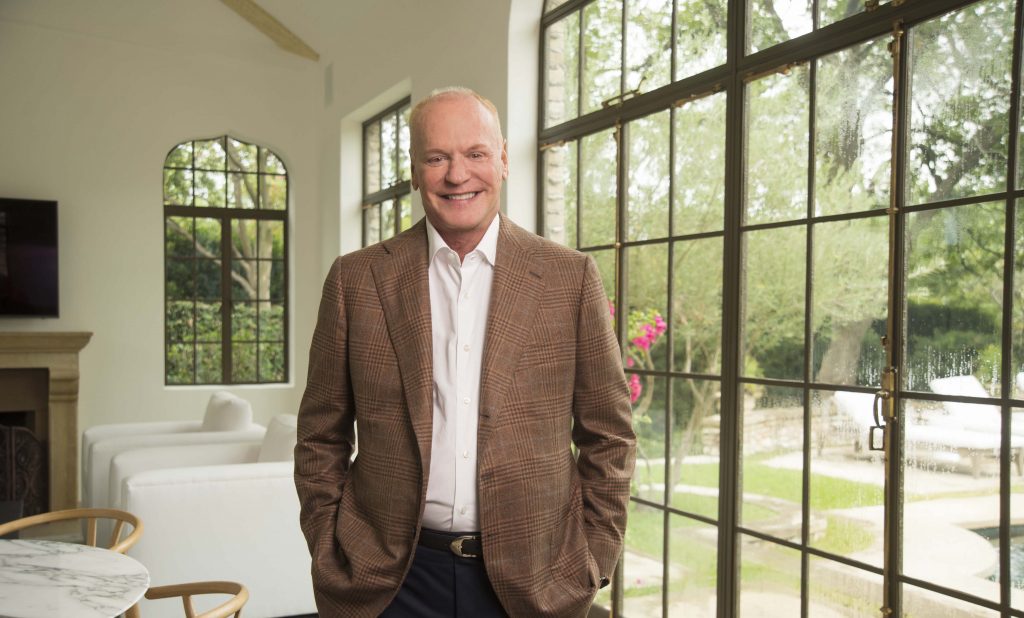 So why has this Texas telecommunications pioneer and regent of The University of Texas System decided to make, in his words, “the biggest gift I will ever make,” to social work? In answering this question, Hicks reflects on his life as a businessman, his love for UT Austin, and how life challenges led him to discover social work and the therapeutic power of helping others.

He grew up around radio, working as a part-time board operator during high school in one of his father’s stations and spinning Perry Como and Frank Sinatra records. He is best known in the telecommunications world for inventing the “local marketing agreement,” which allowed the consolidation of radio station operations and helped turn many stations back to profitability. In 1996 he founded Capstar Broadcasting Corporation, which two years later was the country’s largest radio station holding company.

He is a proud Silver Spur who graduated from UT Austin in 1972 with a BA in government. “I got to be on the field for the games, and during the time I was in school we had 30 straight winning games! I bleed burnt orange.”

He first experienced the power of social work through his involvement with Austin Recovery and the Center for Students in Recovery. “I am in long-term recovery myself. That’s where you can see the backbone of social work, helping people live a sober life. It has been a miracle in my life.” He is also deeply impressed by the role of social workers in hospice care, which he witnessed personally at the death of his parents. “What they do is a true gift to people, as they help them pass on to the next life.”

He believes in the therapeutic power of helping others. “I try to live a life of humility today, but I got to that point by being humiliated many times by making many mistakes. I have been through death and divorce and many of life’s challenges. The only answer to me in terms of my personal journey is to take whatever that experience is, learn something from it, grow from it, and try to help others.”

His secret, as a philanthropist, is how much he gets out of what he gives. He still remembers his feelings when a preschooler at the RISE School of Austin climbed on his lap and gave him a hug.

When he felt ready to make a lifetime gift, he looked at the Forty Acres and found the School of Social Work. “Once I saw the mission of the School of Social Work and realized what the school needs — the fact that students graduate with a lot of debt — I thought it was the place where this gift could make the most impact. I want to be able to say that in my life I made a difference and helped other people.”

He understands that the economics of obtaining a social work degree often require taking on substantial debt: the average student leaves with $42,000 of debt, and the average entry-level social work job pays $35,000 a year. “It is virtually impossible for them to service their debt. I hope my gift and matching gifts going forward reduce that debt burden to something more manageable, where graduates can stay in the field they were trained for, doing what they love to do.”

He is a businessman who likes to see a good investment. “The fact that every social work graduate possibly affects the lives of one thousand people over their career … it is the ultimate leverage. You graduate 200 students every year, that’s 200,000 people that this gift is going to help influence. I like the numbers, it makes sense.”

He always roots for the underdog. “The School of Social Work is under-recognized. You don’t see philanthropists lining up for it. It’s No. 7 in the nation, but it’s one of the most underrated schools on campus. I love underdogs, and that’s why I’m so excited about this opportunity, I think we can make it one of the schools we are proudest of. I hope to live another 15 years to watch what is going to happen.”

He does not want to be too prescriptive with his gift, other than dedicating more than half of it to financial support for master’s-level students. “It is for students, faculty, and the dean to decide what are the most important things that need to happen. But I am really looking forward to seeing Steve Hicks Social Work Scholars out in the world.”

His eyes light up when he sees a white baseball cap with a burnt-orange Steve Hicks School of Social Work logo embroidered on it. He takes four, one for him and one for each of his three children.

The power of giving to social work