You are here: Home / Research

We are interested in the interface between control and information theory. In the case of designing an optimal controller for a platoon of agents which are allowed to communicate information about their states with one another, it is assumed that the channels over which this information is transmitted are precise (the values are real numbers). This does not apply to real-world applications where digital communications (quantized information) are utilized. By applying techniques from information theory, we can generate controllers which account for communication architecture in addition to maintaining stable control.

The figure below shows an impact of control-communication co-design applied to a platoon of vehicles. The 64-bps and 32-bps communication structures both rely on 128-bps to be sent/received per vehicle and result in similar string stabilities (Σ x^TQx), but the 64-bps model utilizes more inputs or “fuel” (Σ |u|^2). 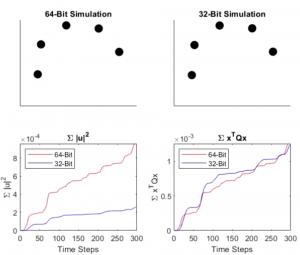 We are researching the use of metrics founding in information theory in order to generate path planning algorithms which support more self-reliant autonomous systems navigating complex, stochastic environments. In current common practice path planning is usually first formulated to minimize a given path efficiency metric (Euclidean distance, energy, etc) and then perception activities are scheduled as part of the path execution. By including information theoretic topics into the path planning algorithms, it is possible to instead jointly account for both the path efficiency and the required amount of perception (data rate, number of sensor actuations) in the planning phase. A by-product of this method is that the algorithms can be designed in such a way that they mimic the intuition of a human expert path planner to generate a simplistic path, or a path which balances efficiency and simplicity to navigate. 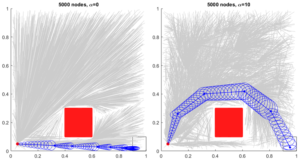 Traffic networks are difficult to accurately model as they are complex systems dependent upon a large number of variables. For example, consider how many drivers travel in and around Austin on any given day, and note that every driver behaves differently. Furthermore, accurate traffic network models must also be able to capture their time-varying nature (consider the difference in traffic density between rush hour and the middle of the night), which adds additional complexity.

To model realistic traffic networks, we use path integral control which allows us to use Monte Carlo sampling in order to capture the variations in the conditions on the traffic network in a computationally tractable manner. Through this approach, we can quickly model complex traffic networks while accounting for varying road sizes, speed limits, and user demand. Furthermore, the robustness of path integral control allows us to define costs that can be arbitrarily complex. In the following example, we consider that the objective of the ride-hailing provider is to minimize the total traffic delay for their users; however, it is also possible to incorporate additional costs such as tolls to examine driver behavior in various situations.

In Figure 1, we show a traffic network where there are two possible input locations, nodes A and B, with two corresponding output locations, nodes C and D. The problem of the ride-hailing provider is how to route its demand along the links to ensure that the users reach their desired output while simultaneously minimizing the total traffic delay incurred across all users. The routing problem for the ride-hailing provider is complicated by the presence of additional uncontrolled vehicles that behave stochastically along the network. The ride-hailing provider uses the path integral control framework to account for this stochasticity when synthesizing its routing strategy. In this example, we randomize the initial densities on each route and consider that the demand of the ride-hailing provider for each input-output pair dynamically changes over the planning horizon. Figure 2 shows the resulting density on the uppermost edges over the course of the time horizon. The large spike at edge 23 is due to merging traffic from the split below.

Cloud-based control is a popular platform in recent years. This motivates us to tackle the confidentiality issues that naturally arise from the use of such shared networks. We investigate both cryptographic (homomorphic encryption) and non-cryptographic (differential and information-theoretic privacy) security measures. We are interested in the security-enhanced networked control system and its performance compared to its counterpart. Figures below show demonstrations of a simple encryption-based control using homomorphic encryption. In this case, the controller (i.e. cloud computing base) itself cannot interpret the incoming data but can perform the evaluation of linear control law blindfolded, thus reducing the risk of data leakage. Recent developments in Fully Homomorphic Encryption may allow for more sophisticated control to be executed privately.

The first figure below describes a simple PID control over homomorphic encryption.

The second photo below shows a physical demonstration of an inverted pendulum stabilized over a Partially Homomorphic Encrypted controller. 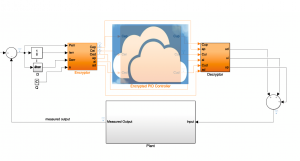 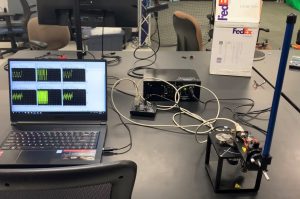