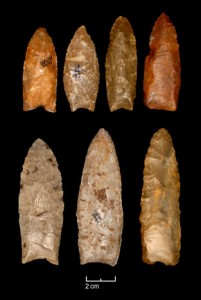 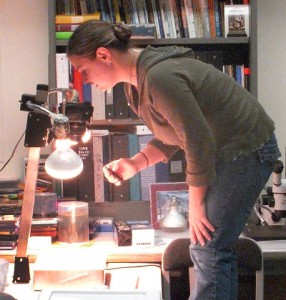 This January, the UT Press released a landmark volume entitled The Collections: The University of Texas at Austin. This beautiful coffee-table volume, edited by Andrée Bober, highlights more than 80 collections of historical, artistic, and scientific objects held by the University. TARL is honored and delighted to have some of our most beautiful artifacts included in this publication. 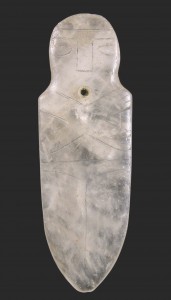 Cat. No. 16SA48-209, Incised effigy on ground and polished quartz crystal from the Coral Snake Mound in Sabine Parish, Louisiana. Featured in The Collections: The University of Texas at Austin.

The Collections showcases only a small amount of the 170 million objects of significant cultural, historic, and scientific value owned by UT Austin—making the University the largest repository of these objects in the state and possibly in the U.S. Some of UT’s collections date as far back as 1883 when the university was founded. Materials from TARL highlighted in the volume include gorgeous lithic, ceramic, and perishable items, some of which date to 10,000 to 13,000 years ago.

Cat. No. 68, Corner-tang knife of grey chert, excavated by the University in 1974-75 at the Ernest Witte site in Austin County, Texas. Featured in The Collections: The University of Texas at Austin.

The inclusion of TARL materials in The Collections was made possible by the work of TARL Director Emeritus Darrell Creel and former TARL Head of Collections Laura Nightengale. Work on this massive volume began more than five years ago, and we are all gratified to see the realization of their labor of love. 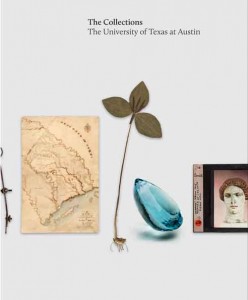 The Collections: The University of Texas at Austin, now available from UT Press.

For more information about the book or to purchase a copy, please visit the UT Press website.

Last year, TARL received a grant from the Texas Historical Commission’s Texas Preservation Trust Fund grant program to conduct a collection rehabilitation project on one of our oldest collections of archaeological material. For this project, TARL chose the collection from the Harrell Site, a fascinating site in North Texas that was excavated by the WPA in 1938-1939. This rehab project was designed to make sure that the site collection is preserved for many years to come, and catalogued in such a way that it can be studied by future researchers. The rehab efforts also served as a pilot project to establish effective and efficient rehab procedures for use on other collections here at TARL.

The Harrell Site excavation was one of the largest projects conducted by the North Texas WPA team. Sitting on bluffs above the Brazos River, the site included a massive midden and hearth feature, known as the “Great Midden,” as well as numerous smaller hearths and burials. Two main occupations, dating to the Late Archaic and Late Prehistoric periods, are seen at the site, with continued usage of the site in the intervening period suggested as well. The Harrell site is the namesake for the Harrell Point, a small arrow point, and was considered the type site for the Henrietta Focus by archaeologist Alex Krieger, who analyzed the site collection in 1945. Read more about the Harrell site excavations here. 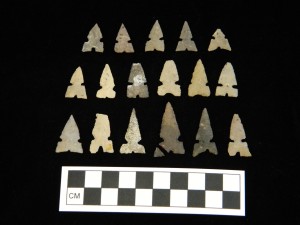 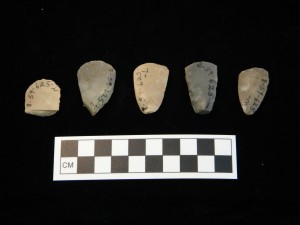 Harrell Points and Thumbnail End Scrapers from the Harrell site.

The WPA excavations of the 1930s and 40s were conducted in partnership with UT, and many of the materials recovered were brought to the University back in the 1940’s. But, curation standards in 2015 are much different than they were 75 years ago! While our newer accessions are stored and catalogued using modern practices, many of our older collections are still stored in the same condition they have been in for 30 years, or 50 years, or longer.

Our grant from TPTF was a rare and important opportunity to dedicate resources and staff time to bringing these collections up to modern standards. Eventually we hope to apply what we’ve learned from this project to all of our older collections.

TARL’s Harrell site rehabilitation project consisted of three main components:
1. Digitizing, inventorying, and improving storage for all of the field notes, reports, maps, and other records associated with the Harrell site’s excavation and subsequent analysis;
2. Cataloguing, photographing, and repackaging all of the artifacts remaining in the Harrell site collection, and re-analyzing the human remains from the site; and,
3. Creating a searchable, state-of-the art database that contains all of the data relating to the site artifacts, features, and records. 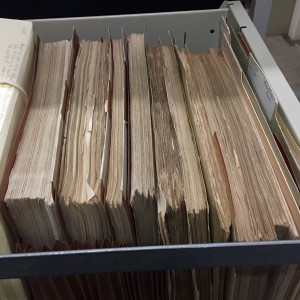 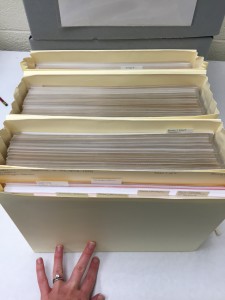 Harrell site records before and after rehabilitation.

As a result of these rehab efforts, the 2,300+ artifacts that comprise the Harrell collection are now individually tagged and repackaged, and their storage conditions will ensure that they are safe for a much longer time. All the site records are organized, protected, and available for digital viewing. And, our database will make it simple to see what excavators found at the site, what we still have, and where to find every single artifact within TARL’s collections. This work has paved the way for future analysis of the Harrell site collection, and for our future rehab efforts on other collections. 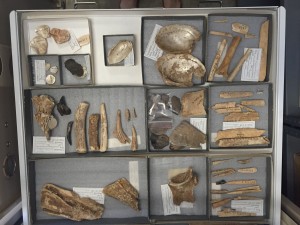 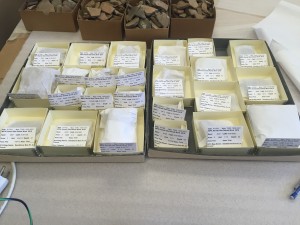 Bone and shell tools from the Harrell site before and after rehabilitation.

Rehabilitating the Harrell collection has also been a valuable opportunity to revisit some of the past work that has been done on the site. The artifact assemblage plainly shows that many of the cultural practices inferred by Krieger and others were clearly present at the site: residents were grinding food with manos and metates, probably practicing s ome horticulture or agriculture, and utilizing the abundant mussels from the river as a major food source. Numerous projectile points of many sizes and types were used for hunting during both major occupation phases. Ceramic pipes and ochre indicate that ceremonial or ritual activity took place at the site, and intrusive burials suggest that the locations of earlier grave sites were preserved in cultural memory over some length of time.

TARL’s rehab work on the Harrell site collection has opened the door for future work on the site significant contributions to our understanding of North Texas in prehistory could be made by researchers:
• conducting usewear analysis of the stone tool collection,
• studying the assemblage in comparison to other sites, or
• close analysis of the ceramics, mussel shell, or bone artifacts.

These are just a few examples of the types of work that could be done using this collection. We hope that this work will spark interest in additional research on this site and other WPA-era collections housed here at TARL.

We hope to have a full report on our rehab work—including an online database with photos—available to the public through the TARL website very soon. We are extremely grateful to the THC for making this important work possible!