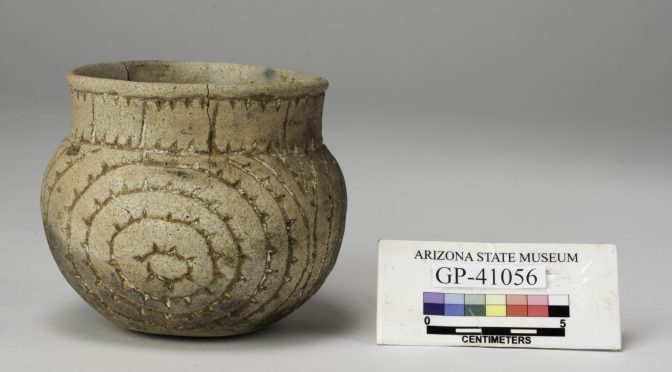 Timothy K. Perttula is a visiting researcher at TARL. This article was part of the September 2017 TARL newsletter.

In the summer of 2017, 21 ancestral Caddo ceramic vessels held since 1933 by the Gila Pueblo Museum and then by the Arizona State Museum were returned to the Texas Archeological Research Laboratory at The University of Texas at Austin (TARL). These vessels had not been properly or fully studied and documented when the University of Texas exchanged these vessels, so the purpose in documenting these vessels now is primarily to determine the stylistic (i.e., decorative methods, motifs, and decorative elements) and technological (i.e., vessel form, temper, and vessel size) character of the vessels that are in the collection, and assessing their cultural relationships and stylistic associations, along with their likely age. In 1933, little was known about the cultural and temporal associations of ancestral Caddo ceramic vessels from East Texas, but that has changed considerably since that time (e.g., Perttula 2013).

Harold Gladwin of the Gila Pueblo Museum (GPM) in Globe, Arizona, first proposed to The University of Texas (UT) an exchange of ceramic materials in November 1931 with Dr. J. E. Pearce of UT. Pearce was not prepared to exchange any ceramic vessels or sherd collections then because the ceramic materials in his possession had not been studied because they had only recently been recovered from excavations at East Texas Caddo sites.

However, by November 1933, Pearce felt an exchange of Southwestern vessels with ancestral Caddo vessels between the GPM and UT was worth doing, and 20 Caddo vessels from eight East Texas sites were selected by E. B. Sayles of the GPM. After Pearce obtained permission from UT President H. Y. Benedict and the Board of Regents, the vessels were shipped to the GPM. The eight ancestral Caddo sites that had vessels selected for the exchange included the Richard Patton Farm (41AN26, 2 vessels); Goode Hunt Farm (41CS23, 2 vessels); Mrs. H. L. Culpepper Farm (41HP1, 1 vessel); H. R. Taylor (41HS3, 7 vessels); T. M. Sanders Farm (41LR2, 2 vessels); Hooper Glover Farm (41MX4, 1 vessel); Russell Bros. Farm (41TT7, 1 vessel); and the J. M. Riley Farm (41UR2, 4 vessels). The vessels remained in Arizona museums until the summer of 2017.

The exchanged vessels from the T. M. Sanders site are from burial features in a Middle Caddo period (ca. A.D. 1200-1400) Sanders phase mound on the Red River. They include a Maxey Noded Redware bottle (Figure 1) and an East Incised bowl.

Finally, the ceramic vessels from the Richard Patton and Goode Hunt sites are from late 17th to early 18th century Historic Caddo burial features in the upper Neches River and Big Cypress Creek drainage basins, respectively. These burial features were in cemeteries created and used by Hasinai and Nasoni Caddo peoples. The historic Caddo ceramics from the Richard Patton site include two different varieties of Patton Engraved (Figure 4), while both vessels from the Goode Hunt site are Simms Engraved carinated bowls (Figure 5).