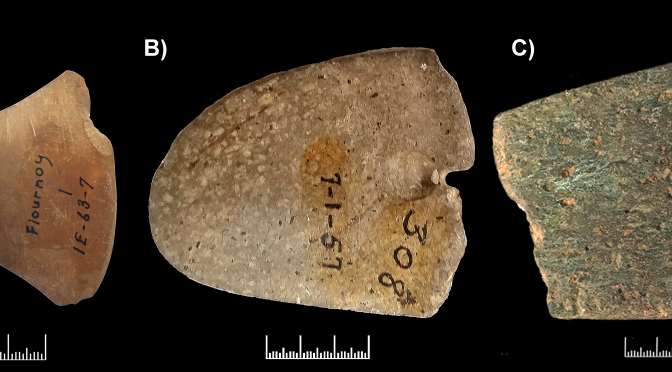 Gus Costa is a visiting researcher from Moore Archeological Consulting, Inc. This article is a part of the March 2018 TARL Newsletter.

Last year our team unearthed several curious bits of groundstone items in advance of road construction on Houston’s west side. One of these objects had been drilled all the way through; a defining characteristic of problematic, perforated, groundstone objects commonly known as “bannerstones.” As the leading “rock geek” of our office, I had the chance to help better determine what these broken bits represent, what they might mean, and why they’re important.

Descriptions of bannerstones go back to the Civil War era when they were regularly labeled as “problematicals”. Some authors called them whale-tails, thunder-bird emblems, ceremonial axes, maces, and butterfly stones. Charles Conrad Abbott coined the term “bannerstone” in 1876. Most early observers were stuck by the elaborateness of these soft and fragile stone items. For nearly half a century the academic consensus was that these items represented non-utilitarian, ceremonial items. In the 1920s bannerstones found alongside antler hooks and handles led to the popular inference that bannerstones were used as spear-thrower or atlatl weights. The debate continues today as to what function(s) these enigmatic artifacts might have served.

Bannerstones appear during the Archaic Period between 6000-5000 B.C. in the Ohio River Valley and parts of the Mid-Atlantic. They proliferate during the Middle Archaic and are replaced in the Late Archaic (at approximately 1800 B.C.) by boatstones (another type of groundstone artifact) and gorgets. Bannerstones are scarcely known in the archeological record of Texas. Only a handful of bannerstones are present within the Texas Archeological Research Lab (TARL). Last year I visited TARL to examine some of these artifacts as part of a larger effort to characterize the Archaic bannerstones of Texas. At present I’ve documented nearly 40 bannerstones from all over Texas, primarily in the southeastern areas along the Gulf Coastal Plain. Bannerstones are fascinating, uniquely American artifacts that are rare, neglected and difficult to make. They can also be useful indicators of long distance exchange of materials and ideas. Petrographic analysis of the bannerstones found by the Moore Archeological team show that an exotic source of granite, hundreds of miles away from Houston, was exploited by Archaic people.