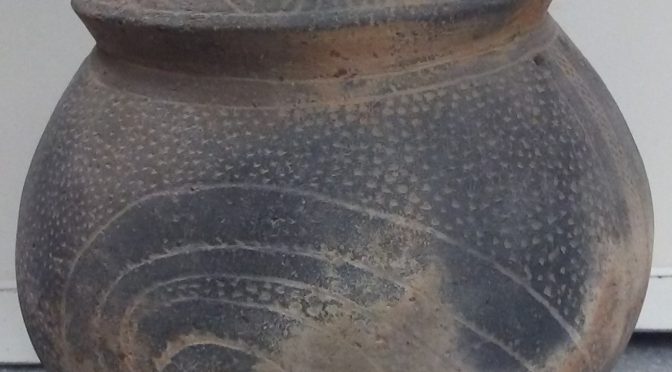 Timothy K. Perttula is a visiting researcher at TARL. This article is part of the September 2018 TARL Newsletter.

For several months this year, I have been focused on the study of ancestral Caddo ceramic vessels in the Texas Archeological Research Laboratory, The University of Texas at Austin whole vessel collections from 20 different Titus phase sites, dating generally from ca. A.D. 1430-1680, in Camp, Franklin, Harrison, Marion, Morris, Titus, and Upshur counties in East Texas (Figure 1). The purpose of this vessel documentation has been to obtain new but comparable vessel attribute data for use in the East Texas and larger Caddo area vessel databases, since the vessels of interest had not been examined and documented in full detail before the vessel documentation I am completing. Furthermore, the vessel metadata and figures are to be included in a Caddo vessel gallery website currently under construction by Dr. Robert Z. Selden, Jr. (Center for Regional Heritage Research, Stephen F. Austin State University).

The ca. 900 ceramic vessels are from different Titus phase sites in the Big Cypress Creek and Sulphur River drainage basins in East Texas. Almost all of the sites were investigated by archaeologists from the University of Texas (UT) in the early 1930s, led by A. T. Jackson, Field Foreman. At that time, UT archaeologists were interested in amassing a material culture record of the aboriginal peoples that lived in the region before Anglo-Americans began to settle in East Texas in the early 19th century, and their particular focus was on the sites and cemeteries established by ancestral Caddo peoples, and their associated artifacts and features. This led to the investigation of a number of Caddo cemeteries and the recovery of numerous funerary offerings, most notably ceramic vessels of many types and forms. Titus phase cemeteries are especially common in the Big Cypress Creek basin, and UT archaeologists investigated a number of them in the 1930s.

The ceramic vessel assemblages from Titus phase sites in East Texas have been the subject of considerable scrutiny by Texas archaeologists since the 1950s, beginning with the development of the typology of Caddo ceramics by Dee Ann Suhm, Alex D. Krieger, and Edward B. Jelks, Robert L. Turner’s ground-breaking studies of the cemetery at the Tuck Carpenter site (41CP5), and then the recognition of the many varieties of Ripley Engraved, the most common Titus phase fine ware, by J. Peter Thurmond. This has been followed in recent years by detailed documentation studies of assemblages and collections from disparate parts of the Titus phase area, to a myriad of other research studies today that are concerned with stylistic, functional, iconographic, mortuary, and social network issues and themes. In my work, the principal concern is the detailed documentation of Titus phase vessels, including several of very distinctive form and decoration (Figure 2a-b) from less well-known mortuary assemblages held in the TARL collections. The hope is that the detailed analyses of these Titus phase ceramic vessel assemblages in East Texas will be of use in continued studies of the social and political organization of Titus phase settlements and communities in East Texas.