Archeologists have known of the painted pebbles in southwest Texas for about 100 years. Extensive excavation of dry rockshelters in the eastern and central Trans-Pecos region began in the 1920s. Initial digging by local collectors was followed in the 1930s by over half-dozen institutions that mounted multiple museum-stuffing expeditions.

Davenport and Chelf (1941) compiled 281 pebble designs observed in various collections from Val Verde county made during the 1920s and 1930s. The Amistad Reservoir salvage program carried out by UT Austin’s Texas Archeological Salvage Project (TASP) from 1958 to 1969 provided numerous additional samples that were recovered from various rockshelters in the Lower Pecos River portion of the eastern Trans-Pecos. As a result, the greatest number of known painted pebbles are from Val Verde county.

UT Austin student and TASP employee Mark Parsons (1967) studied painted pebbles intensively during the early 1960s. His full research paper, in which he worked with a sample of roughly 400 specimens (interpolated from his 1967 references), was never published, but a summary of it appeared later (Parsons 1986). Parsons’ work provides a foundation for continuing study of these fascinating artifacts. He demonstrated that the narrow end of most pebbles is the top portion of the design, but importantly he also defined a Core Motif comprised of 3 elements, and he described six proposed styles of pebbles.

The three elements of the Core Motif defined by Parsons include a Bisecting Element consisting of one or more vertical lines, a Central Element that is horizontal and located toward the lower portion of the pebble, and Flanking Elements positioned on either side of the bisecting element (Fig. 1). Each of these elements may comprise a variety of motifs. 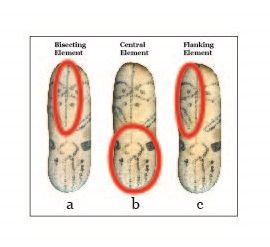 The six painted pebble styles proposed by Parsons are currently being reviewed as part of a long-term study initiated by Shumla in 2009. The research team that includes Dr. Jean Clottes (Foix, France), Dr. Carolyn E. Boyd (Texas State University), and Elton R. Prewitt (TARL) currently works with a sample of roughly 750 painted pebbles. Although modifications to Parsons’ styles appear warranted, the basic structure he presented is sound and requires tweaking only in light of specimens excavated subsequent to his study.

Mock (1987, 2011, 2012, 2013) employs a different method of grouping painted pebbles based upon individual motifs rather than overall style. Her work has contributed significantly to possible pebble motif interpretations. However, we choose to follow the earlier work by Parsons that was based upon analysis techniques used in art history studies.

Pebbles may be painted in red, black or both, and sometimes yellow or white may be observed. Color is not used as a factor in the present examination of style. The illustrations that follow are enhanced either by pencil shading or digital overlay in order to make the sometimes very dim designs visible. Specimens are identified by their Shumla identification number (SID).

Parsons’ Style 1 exhibits geometric patterns. The Bisecting Element generally is three vertical lines while the Central Element has concentric circles and the Flanking Elements contain “X”s or diagonal lines.  Designs often wrap around the lateral edges and most frequently are executed by fine lines. However, some pebbles of this style are executed by broader lines, prompting a suggestion that two substyles might be defined (Fig. 2). 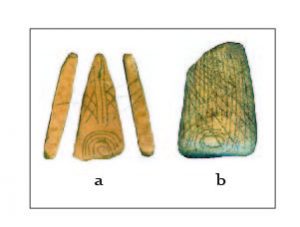 In Parsons’ Style 2 the Bisecting Element usually is three lines, but the Central Element may be rectangular or circular with linear or spatulate forms radiating from it. The Flanking Elements include horizontal crescent lines or “flags.” While not overtly so, this style has elements of anthropomorphic representation. The Central Element circle is very suggestive of female genitalia. Two substyles are distinguished, the first of which includes horizontal crescents as originally defined by Parsons. The second includes straight lines (flags) that may be horizontal or diagonal and usually intersect a vertical line (Fig. 3). 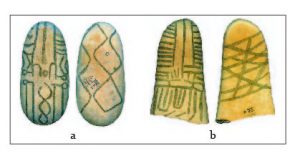 Style 3 pebbles are overtly anthropomorphic with female genitalia apparent in the Central Element. The key features that identify this style are vertically-oriented chevrons positioned to suggest eyes in the Flanking Elements. Sometimes there are multiple chevrons, and some may be joined into a heart shape (Fig. 4). 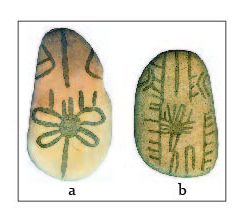 Parsons’ Style 4 is problematical. He defined this style based upon only three specimens, all of which are anthropomorphic exhibiting eyes similar to Style 5. The key motif he proposed is a “V” shape suggestive of projectiles. While this motif appears on several pebbles other than the original three, none of them are anthropomorphic with identifiable eyes. Tentatively, Style 4 may be redefined to include pebbles that have anthropomorphic qualities, especially female genitalia in the Central Element, but that lack eye representations in the Flanking Elements. The three pebbles Parsons used to define this style are now included in Style 5. Five substyles of Style 4 may be recognized (Fig. 5).  In Style 4A the Bisecting Element includes a vee shape or a zigzag. Style 4B has anthropomorphic elements but no eyes while Style 4C is defined by fine-line application and the Central Element exhibits open circle or brackets. Style 4D comprises most examples not assignable to Styles 4A, 4B or 4C. Style 4E includes examples where apparent hair (or head) only is depicted either in red or black monochrome.

Parsons’ Style 5 includes clearly anthropomorphic representations that he divided into two substyles. However, considering the observable variation in the currently available examples it appears four substyles might be appropriate for this group. Basic to the style is the presence of open brackets or circles in the Central Element and depictions of eyes in the upper Flanking Elements (Style 5A). Some examples exhibit downward diagonal lines or bands that converge toward the open brackets or circles (Style 5B). Others appear to have subtle shading on the upper portions of the pebbles suggestive of hair or possibly skull caps (Style 5C). Some anthropomorphic pebbles (Style 5D) are simply not assignable to a specific substyle (Fig. 6).

Style 6 also is anthropomorphic, but hair is clearly depicted both on obverse and reverse faces of the pebble. The Central Element is positioned higher on the pebbles than in other styles; it usually includes a rectangle or oval suggestive of a mouth. Eyes are most frequently depicted by short horizontal bars, but sometimes are depicted by vertical chevrons. No revisions are proposed for Style 6 (Fig. 7). 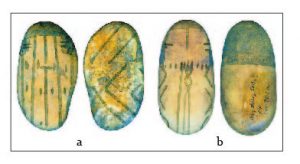 Newly proposed Style 7 includes a variety of geometric designs that differ markedly from those included in Style 1. Divided into three substyles, Style 7 pebbles may exhibit designs that depict “butterfly” motifs (Style 7A) while others comprise vertical lines only (Style 7B). Still others (Style 7C) contain various geometrics such as chevrons that may be nested or sometimes interlocking (Fig. 8). 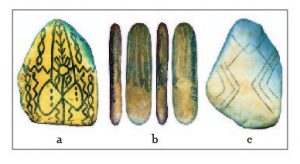 Parsons (1967, 1986) thought the various styles of painted pebbles formed a continuous artistic tradition that extended from the Early Archaic period through the Late Prehistoric period. That notion, however, was based on an outdated concept of Lower Pecos River regional chronology wherein the Late Archaic began at about 3000 B.P. As currently understood, the Late Archaic begins at about 4000 B.P. (Black and Dial 2005; Castaneda et al. 2018).

As originally proposed by Parsons, Style 1 pebbles indeed date to the Early Archaic (9000 – 6000 B.P.) as is confirmed by stratigraphic position and radiocarbon assays obtained from Eagle Cave (41VV167) near Langtry (Koenig and Black 2017). None of the styles are found in contexts suggesting a Middle Archaic (6000 – 4000 B.P.) age affiliation, contrary to assertions by some researchers (Mock 2012; Turpin and Middleton 1998). Styles 2, 3, 4, 5, and 7 are all Late Archaic (4000 – 1200 B.P.) in age although some may extend into the early part of the Late Prehistoric. While Parsons postulated a temporal seriation among those styles, this suggestion cannot be confidently supported at this time. That Style 6 dates to the Late Prehistoric (1200 – 400 B.P.) as Parsons proposed seems quite reasonable although no examples have been found in clear unmixed context.

Acknowledgements:  Thank you to the numerous people who have assisted in this ongoing study. The staff at TARL, the Witte Memorial Museum in San Antonio, the Amistad National Recreation Area of the National Park Service and the Jack Skiles family generously allowed access to their collections.

This summary is revised and condensed from a paper entitled “A Review of Parsons’ Painted Pebble Styles” presented at the 89th Annual Meeting of the Texas Archeological Society, San Antonio TX 26-28 October 2018.

Mock, S.B., 1987. The Painted Pebbles of the Lower Pecos: A Study of Medium, Form and Content. M.A. Thesis, Department of Anthropology, University of Texas at San Antonio. 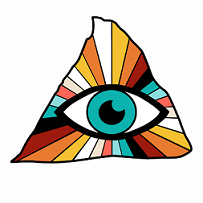 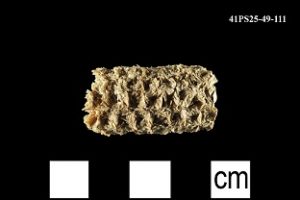