We are delighted to announce that The Prehistory Research Project (formerly known as The Gault Project) will be returning to its roots: Starting early summer 2019 the PRP staff will move the project from its current home at Texas State University in San Marcos to Building 5C at TARL.

Some of you (indeed many of you) are long-familiar with the old Gault Project but for those who might not be, it was a research project that was formed under the auspices of the TARL family and operated out of TARL Building 5A from 1999 to 2009. The Gault Project was created to help manage cultural materials that were being excavated from the Gault Archaeological Site which is located 40 miles north of Austin. The Prehistory Research Project (PRP) expanded its research from the Gault Project to dedicate research efforts beyond the Gault Site to exploring the early human occupations of the Americas. 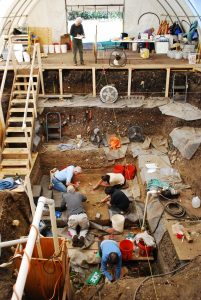 The Gault Archaeological Site is named for the original owner, Henry Gault whose farm had a colorful past; attracting unwanted collectors, as well as professional and avocational archaeologists for over a century. Thankfully, science and education prevailed and helped stop the damage being done from pay-to-dig operations by the late 1990s.  Archaeologists were eventually allowed unrestricted access to the property to conduct excavations when the owners, Ricky and Howard Lindsey granted a 3-year access – 1999 to 2002 – for Dr. Mike Collins to investigate the site. These excavations revealed a prolific, multi-component, well-stratified site representing almost every stone-age culture known in Central Texas.

As is often the case when conducting large-scale archaeological excavations (and as many an avocational and professional can attest), it was the final few days of that 3-year excavation lease that last minute testing revealed artifacts well-below the known Clovis zone. These findings were convincing evidence of older occupations at the site and led to renewed negotiations with the landowners for several years. In early 2007 Gault was purchased by Dr. Collins and the deed ownership donated to The Archaeological Conservancy.

Excavations resumed by 2007, however in the summer of 2009, a generous invitation to move the project to San Marcos from the Anthropology Department at Texas State University was accepted by Dr. Collins and Dr. Clark Wernecke. The relocation of such a high-profile group of researchers would prove beneficial in Texas State’s quest for recognition as an emerging research institution.  It was clear that the Gault Site had mounting evidence that would eventually re-write prehistory of the earliest peoples in the Americas. Thus, The Gault Project grew and expanded to become The Prehistory Research Project. 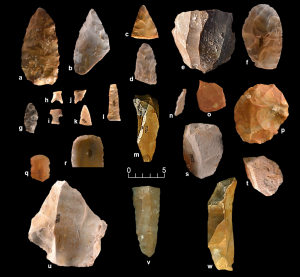 Artifacts from the deepest stratigraphic levels at the Gault Site, named the Gault Assemblage. These artifacts are dated to between 16,000 and 21,000 years old.

Today, the PRP is an active, vibrant project that supports research across the globe with a special interest in all early archaeological evidence, from North, Central, and South America, where sites much older than 13,500 years ago are being discovered or rediscovered on a consistent basis. 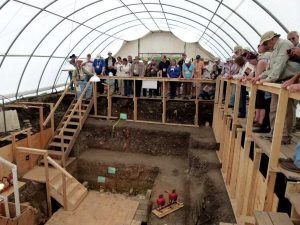 A tour group from the Society for American Archaeology explore the Gault Site with Dr. Michael Collins

As of August 31, 2019, our 10-year arrangement with Texas State University will end on a high note as some of our biggest and most prominent accomplishments have occurred under the auspices of Texas State University. But we are more than ready to move back home to TARL. We will be bringing with us a dedicated team of researchers and, in conjunction with the Gault School of Archaeological Research (GSAR).

Our move to TARL is very much a homecoming for the Gault Archaeological Site and the Prehistory Research Project.  We are thrilled to re-unite with our colleagues and begin a new collaborative partnership with the great folks at TARL and the University of Texas at Austin that we believe will create exciting new opportunities and make archaeology accessible to all!

In the meantime, look for additional details as we get closer to making this endeavor happen, and would like to extend our thanks and gratitude to Texas State University for hosting the project over the past decade and thank all of our friends, colleagues, volunteers, and students who have supported us throughout our time there.

Heartfelt Gratitude and Thanks to TARL for a much-anticipated homecoming!

The Staff of the Prehistory Research Project