The analysis and write-up of the 2002 TAS Field School excavations at the Edd Melton Site in Bell County, Texas, yielded surprising finds. After excavation and inventorying, the Edd Melton Site assemblage showed an interesting co-occurrence of burin spalls and the unusual finds of 24 perforated freshwater mussel shells.  Burin spalls are tools struck deliberately at an approximate ninety-degree angle to the face of the flake or core. A working hypothesis that burin spalls were tools used for working the mussel shells was formulated after Prof. Fred Valdez of UT-Austin alerted the authors to the meaningful correlation of burin spalls and carved shell.  In Valdez’s work in the Mayan culture area of Belize, long burin spalls are associated with carved shell (Valdez, pers. Com.).  It is accepted generally in Mayan archeology that specialized burins are tools for working shell artifacts.

The hypothesis derived from this correlation is direct: the site burins were tools to carve, perforate, and drill the perforated mussel shell on the site.  It was decided to test the hypothesis by conducting an experiment of high magnification examination of site burins and comparing them to burins worked experimentally on modern shell.

The conduct of the experiment proceeded timewise in two phases. The first phase involved the production of chert burin spalls and their application to modern shell surfaces to identify actual shell wear on tools.  The second phase was the high magnification use-wear analysis of both the experimental burins and the archeologic burins recovered from the Edd Melton site.  Relevant patterns could then be compared with reliability.  Christopher W. Ringstaff of The Texas Department of Transportation kindly donated expert skill and Bell County chert material to produce the experimental burin spalls. Marilyn Shoberg of TARL and Texas State University conducted the second phase of the experiment.  All the microscope work was conducted at the Microscopy Laboratory, the Texas Archeological Research Laboratory, UT-Austin. This study of the combination of experimental archeology and microwear analysis is reported in great detail in the report on 41BL1138 forthcoming in the Bulletin of the Texas Archeological Society in the fall of 2019.

The analytical method for microwear analysis is patterned after the work of Semenov (1964) comparing a complex of wear traces including edge damage, micropolishes, and striations to those attributes on experimental tool analogs at magnifications greater than 100x.  Keeley (1980) improved the “high-power approach” to include kinematics of use or angle of attack to describe more clearly how striations in micropolish reflect the action used in specific tasks.  The microscope at TARL used for this analysis is a reflected-light differential-interference Olympus BH2 microscope with Nomarski optics.  The interpretation of wear traces is based on comparison with experimental tool analogs used in a broad range of experiments.  In conjunction with the analysis of this sample of four small tools from 41BL1138, experimental burins were used individually cutting, drilling, slicing, and graving fresh water mollusk shell; and analyzed for reference.

The analysis indicates that three of the small tools from the site were used in manufacturing tasks on shell; two used as drills, one used cutting.  One tool was used cutting soft animal tissue.  One of the drills has additional use of one edge in scraping shell.

The photomicrograph shows the wear on one of the two archaeological tools used drilling shell. 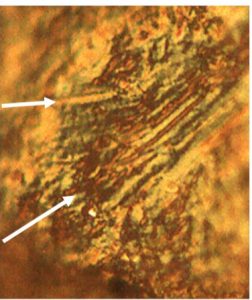 Burin spall 123, lateral  facet @ 500x;  overlapping groups of subparallel troughs in bright platy micropolish originate at the edge of a flake scar at the utilized end of the burin.  The tip of the tool is beyond the bottom of the photomicrograph.  The orientation of the striations (arrows) to the edge of the tool reflect the kinematics of use or angle of attack, i.e. sequential actions parallel and oblique to the tip as in piercing and twisting motions. 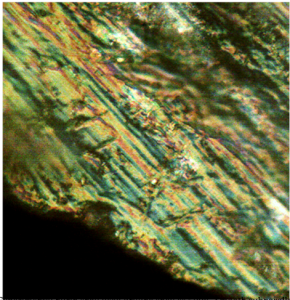 Experimental burin spall used drilling shell @ 500x.  Smooth subparallel troughs of variable width in micropolish reflect the angle of attack when the drill bit was inserted into the shell.  Sharp single striations across the long sleeks are from grit particles dragged across the edge in a subsequent action.  Patches of very bright angular debris are embedded in the polish.

The diagnostic wear traces observed in this study of experimental burins used on fresh water mollusk shell are bright patches of platy micropolish with long subparallel troughs of variable width, and with angular particles or bright debris of considerable variability in size embedded in the micropolish.