The A. C. Saunders site (41AN19) is an important ancestral Caddo settlement in the upper Neches River basin in East Texas (Figure 1a). The site is one of only a few ancestral Caddo sites with mound features in the upper Neches River basin, particularly those that are known to date after ca. A.D. 1400, but this part of the upper Neches River basin, including its many tributaries, such as Caddo Creek just to the south and west (see Perttula and Walters 2016), was widely settled by Caddo farmers after that time. These Caddo groups left behind evidence of year-round occupied settlements with house structures, middens, and outdoor activity areas, impressive artifact assemblages, as well as the creation of numerous cemeteries (Figure 1b), most apparently the product of use by families or lineage groups. 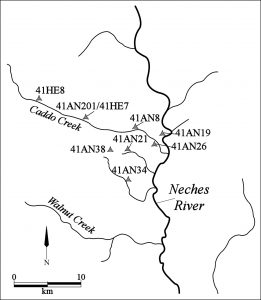 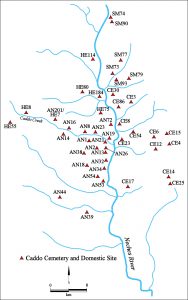 Figure 1. The A. C. Saunders site in the upper Neches River basin: a, important excavated Caddo sites in the Caddo Creek valley and surrounding drainages in Anderson and Henderson counties, Texas; b, known Caddo cemetery and domestic sites.

What makes the A. C. Saunders site unique in upper Neches River basin Caddo archaeology are the two mound features there, situated on a broad upland landform less than a mile west of the Neches River and a comparable distance north of the confluence of Caddo Creek with the Neches River. The first mound (Feature 1) is an ash mound that has been linked with the use of fire temples and perpetual fires by the xinesi of Hasinai Caddo groups in historic times (Jackson 1936; Kleinschmidt 1982, 1984; Perttula 1992; Wyckoff and Baugh 1980). The second mound, not far to the southeast (Figure 2a), is a thick midden mound (Feature 2) that was deliberately accumulated over a large structure (Feature 3, Figure 2b). The concentrated midden accumulation near the ash mound suggests it may represent the remains of multiple feasting events and other ritual activities where large amounts of food were consumed, clay pipes were smoked, and cooking and serving vessels were used, and thus the discarded fragments of these activities creating the midden deposits. These items constitute a discrete and substantial corpus of material culture remains that have played a large role in defining and framing the archaeological character of what has come to be known as the Late Caddo period Frankston phase (ca. A.D. 1400-1680); the A. C. Saunders site is the quintessential Frankston phase site in East Texas. As such, these material culture remains curated at the Texas Archeological Research Laboratory at The University of Texas at Austin—in particular the large number of ceramic vessel sherds and ceramic pipe sherds from Feature 2 at the A. C. Saunders site—warrant continued archaeological study as a means to better understand the stylistic and technological character of the ceramic vessels and pipes made and used by ancestral Caddo peoples in the upper Neches River basin (Perttula 2011, 2013, 2019). The remainder of the material culture assemblage included Perdiz arrow points, stone drills, mussel shell digging tools, an assortment of bone tools (awls, needles, and beamers), and shell columnella beads. 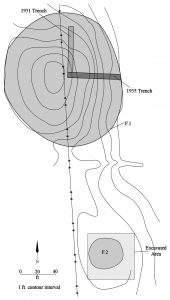 Figure 2. A. C. Saunders site: a, plan map of the site; b, plan map of Feature 3 underneath the midden mound.

Defined utility ware types identified in the ceramic vessel sherds (from jars) include Bullard Brushed, Killough Pinched, La Rue Neck Banded, Lindsey Grooved, and Maydelle Incised, as well as sherds from two new types: Mann Punctated (with tool punctated elements on the rim and /or body), and Saunders Punctated (with fingernail punctated elements on the rim and/or body). Based on the number of rim sherds, the most common utility wares are Maydelle Incised (n=64, Figure 3a), Bullard Brushed (n=56, Figure 3b), Saunders Punctated (n=38, Figure 3c), and Mann Punctated (n=26, Figure 3d).

The fine ware sherds are from carinated bowls primarily from a number of varieties of Poynor Engraved (n=68 rim sherds), particularly var. Cook (n=32 rim sherds) (Figure 4a) and var. Hood (n=13 rim sherds) (Figure 4b), as well as Hood Engraved and Hume Engraved vessels. The predominance of var. Cook and var. Hood vessels suggests that Feature 2 at the A. C. Saunders site accumulated between the early 15th century and the mid-late 16th century (see Perttula 2011:Table 6-37). Hood Engraved effigy bowls were also most commonly manufactured by Caddo potters during that era in the upper Neches River basin.

Figure 4. Most common Poynor Engraved varieties at the A. C. Saunders site: a, var. Cook; b, var. Hood.

The sherds from the A. C. Saunders site are from vessels tempered almost exclusively with grog (i.e., fired clay and/or crushed sherds). Between 98.3-98.6 percent of the sherds by ware have grog temper inclusions. Other temper inclusions, such as burned bone and hematite, were commonly added to the grog-tempered paste, and with regularity in the case of hematite in all three wares (11.7-21.1 percent). The few sherds in the different wares that have crushed and burned bone range from 9.1 percent in the plain wares, 9.9 percent in the utility wares, and 9.0 percent in the fine wares.

In addition to the 7300+ sherds from plain ware, utility ware, and fine ware vessels, there are other distinctive characteristics of the Frankston phase assemblage at the A. C. Saunders site. These include strap and lug handles (n=85) on utility ware jars, pedestal legs and bases (n=13) from Killough Pinched jars, spindle whorls (n=29), and one ceramic bead.

The A. C. Saunders artifact assemblage from Feature 2 has one complete ceramic pipe and 89 stem and bowl sherds. These pipes are from several defined pipe varieties in the upper Neches River basin (see Perttula 2011). Two of the pipe sherds in the assemblage are part of two different circular platform pipes that have either a series of upper and lower large excised pendant triangles or hatched engraved triangles on either side of the platform.

1933    Some Pipes of East Texas. Bulletin of the Texas Archeological and Paleontological Society 5:69-86.

1936    A Perpetual Fire Site. Bulletin of the Texas Archeological and Paleontological Society 8:134-174.

1982    Review and Analysis of the A. C. Saunders Site, 41AN19, Anderson County, Texas. Master’s thesis, Department of Anthropology, The University of Texas at Austin.

2011    The Ceramic Artifacts from the Lang Pasture Site (41AN38) and the Place of the Site within an Upper Neches River Basin Caddo Ceramic Tradition. In Archeological Investigations at the Lang Pasture Site (41AN38) in the Upper Neches River Basin of East Texas, assembled and edited by Timothy K. Perttula, David B. Kelley, and Robert A. Ricklis, pp. 145-320. Archeological Studies Program Report No. 129, Texas Department of Transportation, Environmental Affairs Division, Austin.