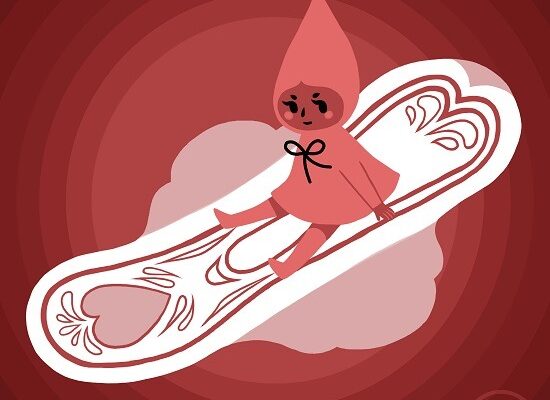 Did somebody say chemistry?! Before you pull out your periodic tables in a panic, you’ll be relieved to know that the only thing “periodic” going on here is menstrual blood. I’m sure that’s still not necessarily a sight to see either. There’s a common misconception that period blood is dirty or toxic, and in some cultures it may even be considered impure. Contrary to that belief, the blood you menstruate is just as “clean” as the venous blood that comes from every other part of the body and it’s harmless as long as you don’t have any bloodborne diseases (pathogens aren’t picky when it comes to manifesting in bodily fluids). I mean think about it, this blood came from an organ that must be hygienic enough to potentially sustain the development of a fetus. Bottom line: it’s just blood.

…But is it really? Yes and no. Here’s a rough breakdown of what makes up menstrual blood. This discussion focuses on the microscopic components of menstrual blood, but we won’t really go into detail at the atomic level.

Shocker. Consider it a watered down version of the “real stuff.” It’s worth mentioning that there is an entire color spectrum of menstrual blood. Deep reds and browns just mean that the blood has taken a bit longer to leave the uterus and has oxidized. Brighter reds indicate that the blood is more fresh. Most of the time, there’s no need to be concerned about the color of your menstrual blood, but you can always get a second opinion from a medical professional if you’re worried.

Your flow may be accompanied by viscous clumps of sloughed uterine tissue. This occurs when an unfertilized egg fails to implant during the menstrual cycle. These clots may be uncomfortable to pass, but they usually aren’t problematic. In fact, their presence is considered healthy.

Secretions from the vagina and cervix

It’s pretty intuitive that these fluids find their way out of your body in the same direction and at the same time as the flow of blood. The majority of these secretions are mostly made up of water and electrolytes such as sodium or potassium. This ionic solution helps keep the pH low and prevents foreign bacteria from flourishing.

There are bacteria that naturally accumulate around the time of your period because your vagina becomes a more moist environment. One thing to note is that you may become susceptible to infections such as bacterial vaginosis when there is an imbalance of these bacteria. This may clear up on its own and if it doesn’t, there are antibiotic treatments available.

Here’s what menstrual blood does not contain.

Although there are clots made up of endometrial lining, the blood itself has a low viscosity. It stays liquid because it lacks the proteins hemoglobin, prothrombin, thrombin, and fibrinogen. Additionally, menstrual blood contains less iron and blood platelets than venous blood.

Think about it. When you bleed from a wound on your arm is there any odor? Hopefully the answer is no. Everyone that menstruates will have a unique natural scent to their blood with varying degrees of intensity. The majority of this can be attributed to bacteria in your vaginal environment and a dash of copper in the blood. A really strong odor likely indicates that the blood soaked up in a pad or tampon has been sitting for too long and needs to be disposed of and replaced. Don’t be too hard on your menstrual blood when it’s just trying to give you a gentle reminder to tend to your needs every once in a while.

Note: There are actually very few comprehensive studies that have analyzed the complete biochemical components of menstrual discharge in statistical significance. In this blog, the chemistry was kept to a minimum. What’s important is that you learned what’s actually leaving your body every time you menstruate.