You are here: Home / Features / A matter of life or death

In March 2019, Rose Lewis and Nayeli Moreno sat in a Corpus Christi courtroom, witnessing the sentencing trial of Arturo Garza. Garza pleaded guilty to severely beating and strangling his pregnant girlfriend, Susanna Eguia, to death. Nueces County prosecutors pushed for Garza to receive the death penalty. During trial, the prosecution argued that Garza was still a threat to society and showed pictures of Eguia’s battered body in hopes the jury would understand the heinous nature of the crime.

Lewis (MSSW ’19) and Moreno (MSSW ’19) were in the courtroom as social work interns with Texas Defender Service, which was assisting Garza’s defense team. Since starting their internship a few months earlier, Lewis and Moreno had received a crash course in the only strategy that could save Garza’s life: mitigation.

Texas Defender Service is an Austin nonprofit dedicated to improving the quality of representation afforded to individuals in capital crime cases. TDS was founded by death penalty attorneys but one of its key divisions, the mitigation unit, is almost fully staffed by social workers.

“Mitigation is about telling your client’s story with the intent to prevent the person from getting a death sentence or being executed,” TDS director of mitigation Randi Chavez (MSSW ’03) said. “It’s an in-depth bio-psycho-social assessment, where we try to figure out how this person went from being born to being accused of murder.”

Mitigation arose from the Supreme Court ruling in 1976—when capital punishment was restored in the United States after a four-year hiatus—that those who sentence people to death must be able to consider “compassionate or mitigating factors stemming from the diverse frailties of humankind.” Mitigating factors can be anything from mental illness and childhood abuse to remorse and absence of prior criminal records.

Mitigation evidence can be presented during sentencing trials. Because of the high stakes involved in capital crime cases, the Supreme Court mandates a two-trial structure: a first trial where juries weigh the evidence to determine guilt or innocence and, if the verdict is guilty, a second, sentencing trial where the same jurors are asked to weigh aggravating factors presented by the prosecution against mitigating factors presented by the defense. Usually, but depending on the state, at this second trial juries choose between two sentencing options: life in prison without the possibility of parole, or death.

Chavez said that for a few years after the 1976 ruling, defense lawyers mostly concentrated on the first trial and ignored the second, sentencing trial, because their training didn’t prepare them to collect or present mitigating evidence.

“At law school, you don’t learn how to interview and establish rapport with clients so they trust you with sensitive information, how to screen for mental health conditions, or how to assess the impact of past trauma on someone’s behavior,” she said.

In the 1980s, anti-death-penalty activists from a variety of backgrounds—most notably anthropologist Scharlette Holdman, who is considered the mother of mitigation—started to systematize the process of collecting, collating, and presenting mitigating evidence. Finally, in 2003, the role of the mitigation specialist was enshrined in the American Bar Association guidelines for capital cases.

Mitigation investigation, Chavez explained, involves building a relationship and establishing trust with the client, tracking down and interviewing “everybody and anybody who has ever known them” (family members, teachers, coaches, friends, clergy, etc.), and conducting a “scorched-earth record collection” (anything from school to medical to criminal records) about the client and, if possible, family members.

“Ideally, we like to go three generations back and two or more out, because you cannot talk about inter-generational trauma if you are only able to document what is going on with your client. In a capital case, when someone may be sentenced to death, they deserve that we do as much to present their case as the law entitles them to,” Chavez said.

Throughout the investigation process, TDS mitigation unit holds brainstorming sessions to try to make sense of the client’s story and tell it in a way that juries may find compelling. For instance, Chavez said, a member of the jury may not care that the client was abused as a child but may find a brain injury or a psychiatric condition to be a compelling mitigating factor. The unit also helps choose expert witnesses who can testify and collaborate with the defense team during trial.

Chavez started as an intern at TDS when she was in the master of social work program at UT Austin—just as Lewis and Moreno, whom she now supervises. She said that she immediately fell in love with the work.

“I had a general interest in criminal justice but I really didn’t know that mitigation existed. Looking back, I see that what hooked me is that mitigation allows us to do direct social work practice but also promote social justice and impact policy in very concrete ways. It’s a career option that encompasses all what social work is about.”

District attorney’s offices have discretion to decide whether or not to pursue death sentences in capital cases. Oftentimes, defense teams provide mitigation evidence before this decision is made, in order to secure a life-without-parole sentence, and thus avoid trial and a possible death sentence by the jury.

In Garza’s case, despite his willingness to plead to life without parole, the Nueces County district attorney’s office kept death on the table as a possible punishment. The TDS defense team, thus, prepared for trial. 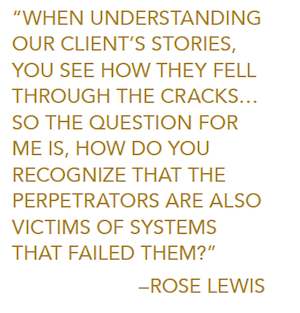 For Lewis and Moreno, trial preparation meant diving right into mitigation investigation. They drove to Corpus Christi to request Nueces County jail records for Garza and his family and to interview jail guards who could talk about Garza’s behavior during his incarceration; they read hundreds of memo pages from existing interviews to find evidence for more than one hundred mitigating factors that the team leader, Miranda Nolen (MSSW ’17), defined; and they tracked the social media buzz on the case to better understand public perceptions about Garza.

The most impactful experience, however, was to observe and assist during trial.

“It was eye-opening to see Miranda interact with the defense attorneys; it made me realize that social workers can have a lot of power,” Moreno said. “My perception was that attorneys are high on a pedestal compared to social workers, but they were asking Miranda for help because she had expertise that they didn’t have. During the sentencing trial, the case could only be won on mitigation,and Miranda was the key to that.”

The power of the social work profession also came through during the testimony of Laura Sovine (MSSW ‘01), whom the mitigation team selected as the trauma expert.

“Laura was phenomenal,” Lewis said. “Prosecutors tried to poke holes in her argument and she was so composed and knowledgeable. She explained ACEs [Adverse Childhood Experiences] to the jury, talked about the scientific evidence behind it, and presented results on the ACEs questionnaire for Garza and his sisters; all of them scored high. You could see the jury wake up when she spoke, they were clearly interested in what she was saying.”

Finally, the trial also made tangible that mitigation is, literally, a matter of life or death. The jury found that there was enough mitigating evidence, and the judge sentenced Garza to life without parole.

Both Lewis and Moreno said that, when they explain what they do as part of the TDS mitigation team, family and friends often ask if they are not bothered by the fact that their team is defending individuals who have committed horrible crimes.

“This is something that I myself still struggle with,” Lewis said. “Throughout the master program we work with many vulnerable individuals who have been victims. But when understanding our clients’ stories, you see how they fell through the cracks as they were growing up. So the question for me is, how do you recognize that the perpetrators are also victims of systems that failed them?”

Moreno added that she knows it takes a certain kind of person to do this work.

“I can definitely understand how some people would find it difficult to defend someone who’s guilty. I know there are victims, and that our clients did horrible things,” Moreno said. “But we are willing to look deeper into their lives, and understand how they were shaped to potentially lead them to the place they are today. For me, it all comes to the idea that we are all human beings, and the willingness to see the humanness in every situation.”