It was Wednesday evening and a Pitbull hit was blasting in the community center of the Homestead Oaks Apartments in South East Austin: Echa pa’lla, todo lo malo, echa pa’lla (“throw it away, all that is bad, throw it away”).

About 35 sweaty individuals jumped, twisted, and shimmied to the music following the cues of an energetic instructor at the front. It was mostly women, mostly middle-aged, and mostly Latina-looking — although I could not take my eyes off an older white woman in khaki pants who seemed to be having the time of her life. Every time the chorus line came up, everybody moved their hands with gusto, as if shaking something off them. 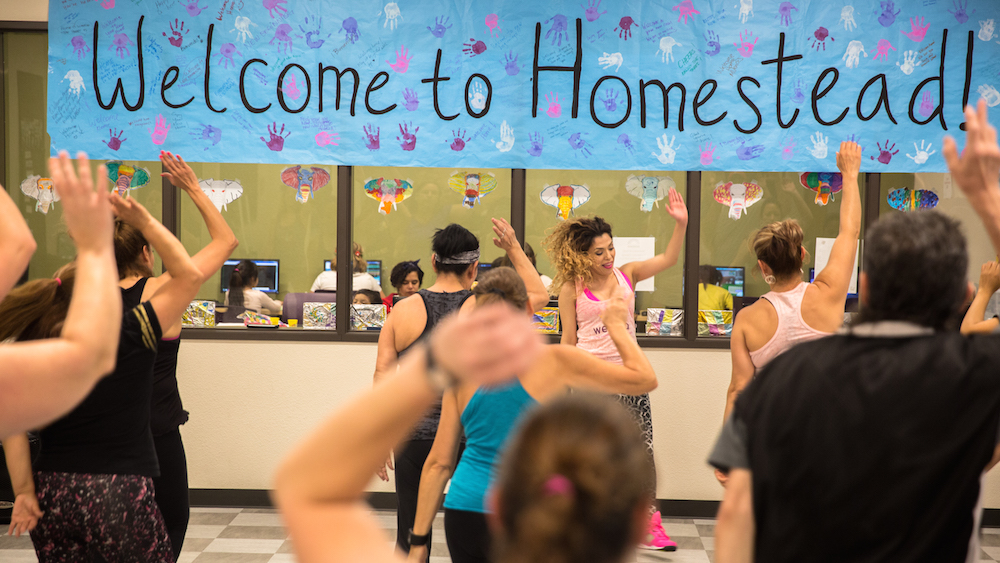 This was a WeViva Zumba class, the brainchild of Carolyn Haney (MSSW ’03).

“I’ve always wanted fitness to be a social work issue. Social workers are starting to care about nutrition, but haven’t got to fitness yet. But if you think about it, being fit is all about access to resources: you need money to take a class or buy the right pair of shoes; you need time, if you are a parent you need a support system in place, and so on,” Haney told me one morning over coffee. Her hair was up in a ponytail, and she had black athletic wear on. She likes to run early in the morning, before her two daughters wake up.

Haney came to social work with a life of being active in her native California, a stint as a ski instructor in Utah, and another stint as a counselor in a residential treatment center with an intense wilderness-oriented program. While doing her master’s in social work at UT Austin, she sought an internship with Marathon Kids, for which she promoted running among school-age children in low-income Austin zip codes. She continued on this path after graduating, joining another Austin nonprofit that targeted obesity via programs to get children in middle schools active and healthy.

“And then I had my first daughter in 2010,” she said and paused her rapid-fire talk for a moment. “I was in a place where I wanted to get my body back. I had the resources to do it, but this made me think of the many women who didn’t. I realized that while we were all targeting kids with fitness and get-healthy programs, there was this huge population of low-income mothers in Austin, mostly Hispanic, that nobody was paying attention to, nobody was serving!”

Statistics from the Texas Department of State Health Services back Haney’s realization: Women are less likely to engage in leisure physical activity than men, and Hispanic women are more likely to be overweight and have diabetes than white women.

Haney said her idea was simple: to create a comfortable, culturally appropriate space for low-income moms wherever they lived, where they could drop off their kids, exercise, and learn about healthy eating — all this for free.

“Target the mom,” she elaborated, “and the family will be healthy. If the mother has the knowledge and the resources, she can be a role model and create healthy habits for the whole family.”

In the spring of 2011 Haney approached Foundation Communities and offered to develop a six-week fitness and nutrition program for residents of one of the organization’s apartment complexes. As the social worker she is, she started by surveying her target population to find out its needs.

“I distributed flyers, and I literally knocked on the door of every single apartment. I went with a friend who spoke Spanish so that we could share the idea with the women and find out what they wanted. We offered three options: aerobics, which we called ejercicios de mujeres, yoga, and Zumba. And it was 100 percent Zumba, Zumba all the way!” she said laughing.

Out of that successful test-run, Haney developed WeViva, now a fully fledged 501c organization that offers between 30 and 40 free fitness and nutrition classes a week to adults all over Austin — in apartment complexes, clinics, schools, and community organizations. The majority of adults served are low-income Hispanic women, and thus most classes are bilingual in Spanish and English. The nonprofit’s very name is a hybrid of English and Spanish: “We” (community, friends, co-workers) and “Viva” (Spanish for live or alive).

“The goal is to remove every possible barrier. Our instructors speak Spanish, look like our participants, understand that these moms may have never taken a fitness class before, that it can be intimidating for them. We also offer free childcare when needed. We want to make it easy, fun, and enjoyable, because we want them to keep coming back,” Haney said.

Fun certainly abounded at Homestead Oaks that Wednesday evening. The Zumba class ended with rounds of high-fives, hugs, and group photos. About 15 women stayed for a nutrition class taught by a spunky instructor named Maria. The topic was sugar in drinks and packaged foods, and Maria had lined up products going from soda to ranch-dressing on a desk. She switched effortlessly between Spanish and English as she read the nutrition labels, advised to double check the serving size, and explained the math to convert pesky grams of sugar into more visual spoonfuls — “just divide the total by four!” 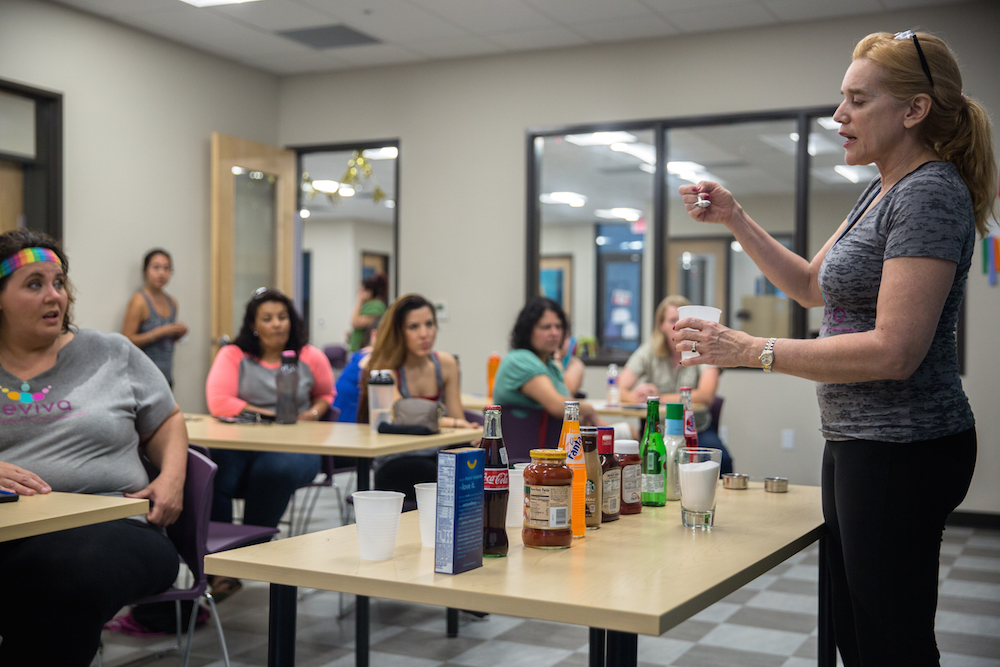 A chorus of “ooohhs,” “aaahhs,” and “Dios míos” rose as Maria theatrically poured 12 tablespoons of sugar into a plastic cup to show the sugar content in a bottle of Fanta strawberry.

“Es lo mismo! It’s the same!” Maria answered and read the nutrition label on a bottle of 7Up. “Next time your kid has a tummy ache, think twice before giving them 7Up!” She held the plastic cup with sugar high for everyone to see: “This is what you are giving your kids when you take them to the piñata. And then you wonder why they won’t stay put!”

Questions kept popping up as Maria went down the line of products. When she reached the end, a woman in a grey WeViva t-shirt said, “So, pretty much you are telling us that we shouldn’t cook with anything that comes from a box or a jar. That’s all I know how to do! Does WeViva offer cooking classes?”

This is the kind of response that makes Haney happy: “I want WeViva to be a resource for these moms so that they can be the epicenter of health and wellness for the whole family.”

Haney looks back with satisfaction to WeViva’s seven-year run. Always a mover, however, at the time of this interview she was in the process of stepping down as the nonprofit’s executive director to let new people in with new ideas that could bring the organization to its next phase. When asked what was next for her, she thought for a moment.

“I don’t know yet, but I do think about teaching about fitness and social work,” she answered. “We social workers need to talk more about the benefits of fitness; we should be talking about fitness deserts as we talk about food deserts. That’s an idea to explore!”