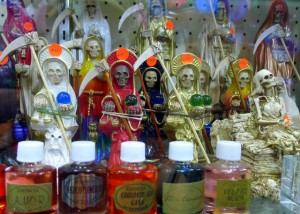 Can’t find the love of your life? Having problems with a mean boss? Trying to get a powerful lucky charm? Want to get rid of your bad luck? The Mercado de Sonora, in the heart of Mexico City, offers a wide variety of occult items to fulfill any macabre wish. Ranging from white, black and pre-Hispanic magic potions to Santería, Santa Muerte, and shamanistic rituals, the obscure merchandize for sale at this market will surely feed your imagination. Among stalls with skulls and dubious containers, however, visitors can also find a different sort of “black listed” items: illegally poached animals.

Since its founding in 1957, the Mercado de Sonora has been christened “the market of witches and animals.” A number of animals sold in this space (kept under terrible sanitary conditions, by the way) are meant for farm and home use, and therefore it is not uncommon to find caged poultry, rabbits, dogs, and cats. But endangered reptile, bird, fish and mammal species are equally traded in this space. Threatened wild boars, white tailed deer and puma cubs are among the mammals sold, along with birds like toucans and parakeets. Reporter Albert Delgado narrates how during a visit to the market he was offered a “Peruvian crocodile,” kept inside a backpack behind one of the counters. When asked why it was hidden in a bag, the owner replied that the animal had “paper problems with SEMARNAT.”

The Ministry of the Environment and Natural Resources (SEMARNAT) and its division, the Federal Attorney for Environmental Protection (PROFEPA), are in charge of supervising and authorizing animal trade in Mexico. In their role as implementers of CITES provisions (Mexico is a party since 1991), they make sure that traded species have adequate documentation to show the legality of their origins. In this capacity, the PROFEPA recently launched an operation against a popular pet shop chain, confiscating over 258 exotic animals that lacked proper documents. Unfortunately, governmental efforts to crack down endangered animal traders at the Mercado de Sonora have proved more elusive.

In 2013, legislators at the local level—particularly those affiliated with Mexico’s Green Party (PVEM)—called for large-scale operations to protect and rescue animals sold at establishments like the Mercado de Sonora, as well as tougher punishments for those involved in the trade. To date, only 58 persons have been arrested in Mexico City for crimes related to animal trade, evidencing a lack of enforcement capabilities. Governmental authorities point out that, when inspections take place in marketplaces, traders run away and “disappear” (are delinquents taking magic potions from neighboring stalls?). It remains to be seen whether local police forces will join environmental protection agencies in the fight against illegal wildlife trade in the Mercado de Sonora.